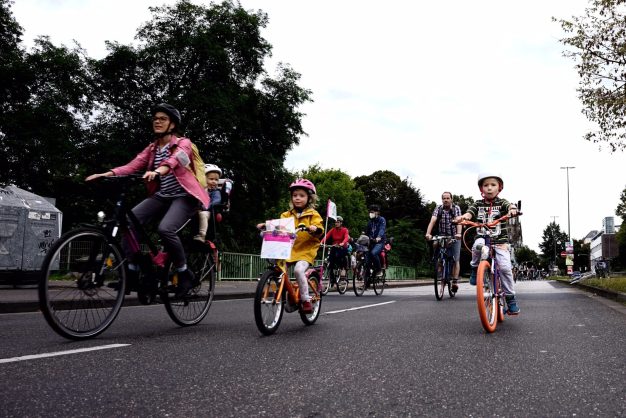 For the second time this year, tens of thousands of children, young people and their families took to the streets over the weekend as part of a mass movement that is campaigning for safer streets for children.

‘Kidical Mass‘ took place in more than 200 cities, small and large, as people demanded that local and national governments do more to deliver child-friendly transport policies.

It was the follow-up to the first such event in May, and at the forefront of this movement is Germany. Organisers say that more than 84,000 signatures of support have already been collected and handed over to the authorities.

One city spearheading the movement is Cologne, where more than 2,000 took to two-wheeled transport. “Roads are there for everyone,” said Anouk, aged nine. The petition was handed to Oliver Krischer, Transport Minister for the North Rhine-Westphalia region, and he said: “We want cities to be for children and not just for cars.” In Cologne alone, more than 2000 people were on the bikes.

Simone Kraus, from Kidical Mass, said: “The large number of participants makes it abundantly clear how urgently many people want more safety for cyclists and pedestrians. Now it’s up to the politicians to put these demands into practice, as it is says the coalition agreement. We finally need child-friendly road traffic laws.”

Kidical Mass says that future traffics law must focus on the safety of children, including the introduction of 30 km/h as the standard speed limit in built-up areas, and enabling the uncomplicated construction of protected or structurally separate cycle paths on main roads. It also calls for the safety of children and climate protection to be prioritised over car traffic in any reforms to road traffic leglisation.

Organisers say that although Volker Wissing, the Federal Transport Minister was not present at the weekend’s events, they will be inviting him to hand over the petition to the Transport Ministers’ Conference in October. In the meantime Kidical Mass will continue to collect signatures of support.

Ultimately, they add, ‘child and bicycle-friendly mobility starts locally’, and so the Kidical Mass website has various resources for helping you get involved with the campaign at a local level.