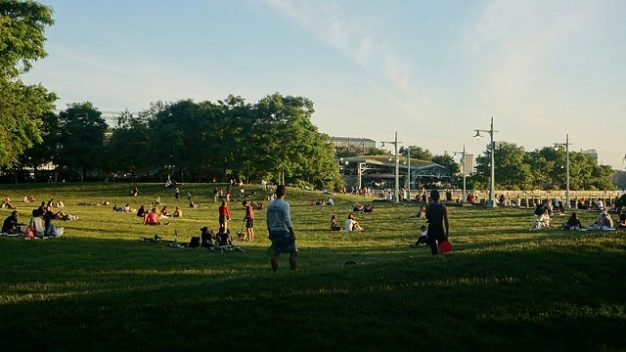 Published on 30-08-2022 at 09:00
Access to green spaces can enhance children’s overall health and help release stress and excess energy. Photo by Andreas Komodromos/Flickr

Those are the findings of a conclusion of a new partnership study led by the Barcelona Institute for Global Health (ISGlobal), which regularly investigates health issues that affect children and young people.

In particular, this latest study found that children who live surrounded by more natural spaces are more physically active, spend less time doing sedentary activities, get more hours of sleep and are more likely to walk or cycle to school.

Most studies conducted to date have focused on the effect of the urban environment on adults and considered only a single type of exposure, without relating it to other factors. This new study goes a step further by assessing the association between a wide range of urban environmental characteristics and healthy habits in 1,581 children aged 6 to 11 years from six European cohorts. The study reflects the growing interest in investigating how the urban environment contributes to unhealthy behaviours in children and whether a change in urban design could help to promote healthier lifestyles.

Researchers estimated exposure to 32 characteristics of the urban environment near the children’s homes and schools, including traffic density on the nearest road and the presence of green spaces or blue spaces (beaches, rivers, lakes, etc.). They also collected information on the children’s healthy habits, including the total amount of time spent doing moderate-to-vigorous physical activity, physical activity outside of school hours, active transport (walking, cycling, etc.) and sedentary activities, as well as sleep duration. A multiple-exposure model was developed using these data.

What they found was that active transport increased while time spent doing ‘sedentary’ activities dropped in those places where children were more exposed to green space. It also suggested that proximity to a major road was linked to shorter sleep times.

Martine Vrijheid, head of ISGlobal’s Childhood and Environment programme, and lead author of the study, said: “Our findings have implications for urban planning policies. Public health interventions tend to focus on influencing individual behaviours rather than tackling the broader system determinants that drive these behaviours and widen health inequalities.

“Our evidence reinforces the need to prioritise urban design to improve health-promoting behaviours in children and prevent ill health in adults. One such strategy should be to increase the number of green spaces and the amount of vegetation in the streets.”

Further research, she added, was needed that takes in other urban indicators which may be relevant for the behaviour found in children and adolescents, such as traffic-free zones and sports facilities.

Around two-thirds of the children included in the study did not meet current World Health Organization recommendation levels for moderate-to-rigorous’ physical activity, which is about 60 minutes a day. In addition, just under two-thirds spent more than two hours a day playing computer games.