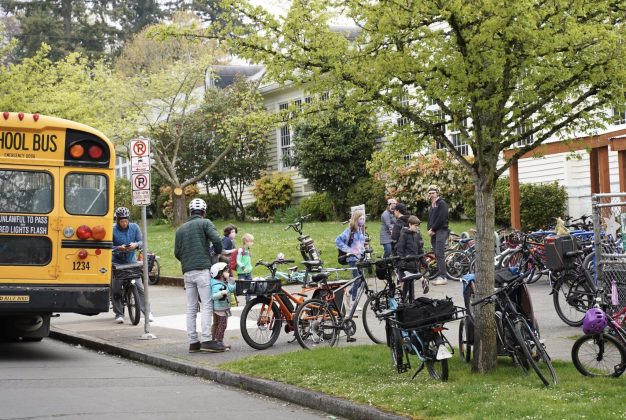 School’s almost out for summer vacation for many students in Oregon. But transportation planners in their cities and school districts are already thinking past Labor Day, eager to make it easier for students and parents to use active transportation to get to school.

Through the Oregon Department of Transportation’s (ODOT) Safe Routes to School program, school districts have the opportunity to apply for grants for infrastructure and non-infrastructure projects to encourage and facilitate safe ways for kids to walk, bike or roll to school.

The Portland Bureau of Transportation has its own Safe Routes to School program, as do other communities around the state, like Eugene-Springfield, Salem-Keizer and Beaverton. These programs receive funding from local sources, like Portland’s gas tax and Metro. But statewide funding adds an extra boost to projects, and can be especially beneficial in rural areas, including tribal communities, says Taylor Griggs of BikePortland.

‘Facilitate safe ways for kids to get to school’

In addition to education grants, ODOT also announced it will be working with 13 new rural communities to provide project identification assistance, which will involve these communities working with consultants to create their first Safe Routes to School plans. These plans analyze existing community conditions and create an outline people can work with when looking at implementing policies to help kids walk and bike to school safely. You can read examples of past plans on ODOT’s Safe Routes to School website.

School districts and cities vying for infrastructure funding are in for a much tougher competition. This year, 85 applicants asked to receive money for sidewalk infill and safe crossings near schools, their requests totaled more than $80 million. ODOT only has $26 million to spend, so many of these requests will go unfulfilled. The process for deciding who will receive infrastructure funding is still ongoing, and the grants will be awarded in January of next year.

The city of Portland has asked for $3-4 million of this $26 million for two construction projects in east Portland: sidewalk infill and crossing improvements near Powell Butte Elementary School constructing a paved walkway to serve Alice Ott Middle School students. You can find the list of all 85 applicants here.

Over the next several years, ODOT will add $30 million from the federal Infrastructure Investment and Jobs Act to the funding currently used for Safe Routes to School projects. It’s unclear exactly how this money will be distributed, but it should provide some extra help to fund more infrastructure and education projects.

It’s exciting to see projects in the works making it safer for kids to get to school without needing to be dropped off in a car. Many transportation advocates speak highly of communities in which children have the freedom and agency to safely walk and bike. Just look at the positivity radiating from the ‘bike buses’ Portland physical education teacher and bike advocate Sam Balto has organized for the past several weeks as a safe and fun way to get kids to ride their bikes to school! With more official funding for programs to get kids moving and reduce family reliance on cars, more communities will be able to reap these benefits.

This article was originally published at BikePortland, an independent news company covering cycling and transport issues in the Portland region. It is republished with their kind permission. Taylor Griggs is a staff writer for BikePortland. 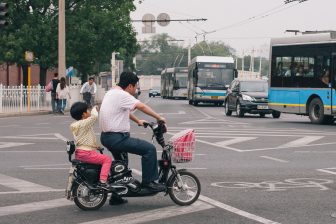