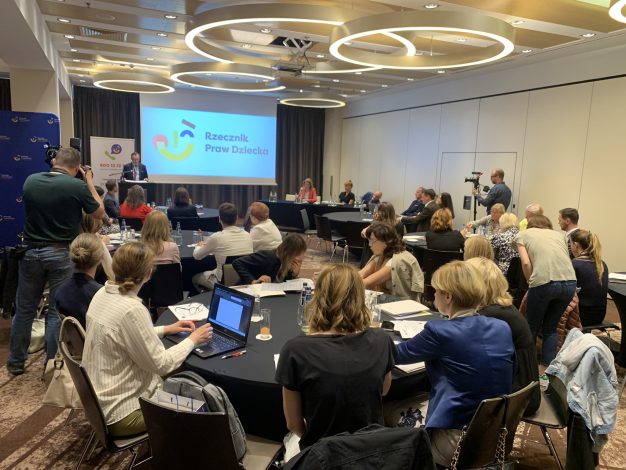 The desperate situation facing many children forced to leave war-ravaged Ukraine is dominating the agenda at this week’s gathering of the European Network of Children’s Commissioners (ENOC).

ENOC is a non-profit body of independent children’s rights champions, designed to promote and protect young people’s rights, as set out in the UN Convention on the Rights of the Child.First established in Norway in 1997 and now based in Strasbourg,

ENOC has evolved into a body which brings together 43 institutions spread across 34 countries within the Council of Europe. All are committed to working together to advocate for children in their respective country, and collectively at an international level to protect children’s.The continuing conflict in Ukraine, not surprisingly, has formed a major part of proceedings at this latest spring seminar of ENOC, being held in the Polish capital, Warsaw.

Working together to advocate for children

As well as an update on the humanitarian situation in Ukraine, the seminar is also covering what actions are being taken to support those children who have been displaced across Europe, including the specific challenges faced in different countries.

One of those being represented in Poland is Dame Rachel de Souza, Children’s Commissioner for England. Reflecting on her recent meeting with Ukrainian children at London’s Great Ormond Street (GOSH) Hospital, she said: “I was lucky enough to spend some time with a family who were receiving treatment here. Their story was hard to comprehend, almost too difficult to imagine the trauma and adversity they have faced.”

But she was ‘rightly proud’ of how GOSH, along with other hospitals schools and local authorities were responding to the humanitarian crisis facing children forced to flee Ukraine.

The ENOC seminar also features a discussion on the climate crisis and how this relates to the UN Convention on the Rights of the Child. This was also a big issue highlighted in the responses from young people last year to Dame Rachel’s survey, The Big Ask, the UK’s largest-ever child-focused consultation.

“Children are passionate about protecting our planet and want to have a say on this and other major issues affecting our world,” she said. “Just over 1 in 5 children chose ‘a healthy environment and planet’ as one of their top priorities for having a good life when they grow up. That is why, last year the Commissioner took children’s voices to COP26 and has chosen to make ‘A Better World’ a key pillar of the office’s work over the next five years. Now, this is an opportunity to take children’s voices and views on this important topic to ENOC too.”

ENOC will also discuss the role in general independent children’s rights organisations, seeing it as an opportunity to share ideas with other similar organisations across Europe about how to use our statutory powers and responsibilities to make a difference for children.

The chair of ENOC is elected at its annual conference, and the position is currently held by Theoni Koufonikolakou, deputy ombudswoman for children’s rights in Greece. ENOC is co-funded by the European Union’s Citizenship, Equality, Rights and Values (CERV) programme