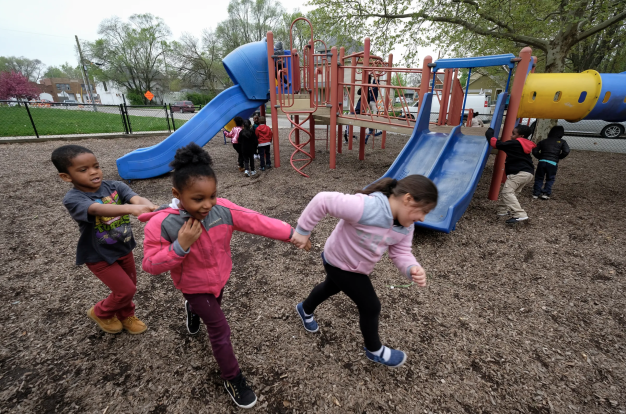 Reading, writing, and ’rithmetic are important, but one group of educators and business leaders in Michigan, USA, wants to make sure schools don’t forget about a fourth R: recess.

Roughly one in five elementary school students gets less than 20 minutes of recess time each day, according to a new survey of school administrators conducted by the Coalition for Michigan Schoolchildren’s Right to Play.

In some districts, children get little more than a few minutes of playtime in the gymnasium after lunch, said Paul Liabenow, a member of the coalition and executive director of the Michigan Elementary and Middle School Principals Association.

The survey comes after two years of disrupted learning when quarantines and school closures forced children into virtual learning without opportunities for free play or in-person interaction with classmates during school, says Tracie Mauriello, Chalkbeat Detroit.

That loss contributed to changes in children’s physical and mental health, said Rebecca Hasson, associate professor of kinesiology and director of InPACT, a University of Michigan project to promote physical activity in schools. Children need recess now more than ever, said Hasson.

“It isn’t just fun, but there are actually many mental, emotional, and physical benefits that come with free time,” she said.

The Right to Play coalition, which formed last year, does not have comparative data over time, but Liabenow said he believes recess time has been shrinking as districts struggle to provide enough equipment and staff to supervise unstructured play.

Hasson attributes the contraction to many factors: “You need equipment. You need staffing. You need to make sure there are precautions in place so children don’t get hurt. You need training on how to effectively monitor recess so it will be a positive experience,” she said.

In some small schools, the biggest obstacle is scheduling playtime around physical education classes that occur in the same spaces as recess, Liabenow said. The pressure to improve test scores could be a factor, too, coalition members said.

That’s particularly true in districts where administrators are unaware of research showing that recess is associated with higher academic achievement, he added. He wasn’t when he was a principal in Cadillac Area Public Schools.

“For the first 20 years of my career, I would say we need to double down on instruction and set aside playtime, but research doesn’t support that idea,” he said.

Recess is not required by law in Michigan, although the state Board of Education in 2012 recommended that all public schools offer at least 30 minutes of vigorous physical activity outside of physical education classes, including at least 20 minutes of recess.

That’s in line with Centers for Disease Control and Prevention recommendations and with laws in several other states. Coalition members have been talking with lawmakers about the importance of recess, but have focused on educating administrators to increase recess time without a state mandate.

“Our hope is we can [encourage schools to prioritize recess] simply by virtue of informing and offering ideas for how to make it work with schedules and staffing,” said Liabenow.

In Leelanau County, in the northwestern Lower Peninsula, Principal Ryan Schrock needs no convincing. His students at Glen Lake Elementary School get at least 50 minutes of recess per day spread across three breaks.

“That’s not negotiable. It’s important time for kids,” Schrock said. And it doesn’t mean they aren’t learning just because they’re playing, he said.

“When they’re engaging with each other, they’re using language in really meaningful ways, so giving them that time to be outside at recess” can lead to academic improvement as well, Schrock said — especially if certified teachers are monitoring recess and engaging with them.

‘Schools should offer at least 40 minutes a day’

The poll has a margin of error of plus or minus four percentage points.

Along with its survey results, the Coalition for Michigan Schoolchildren’s Right to Play issued guidance to schools:

The coalition was convened by Playworks Michigan, a nonprofit group that advocates for improving children’s health and well-being.