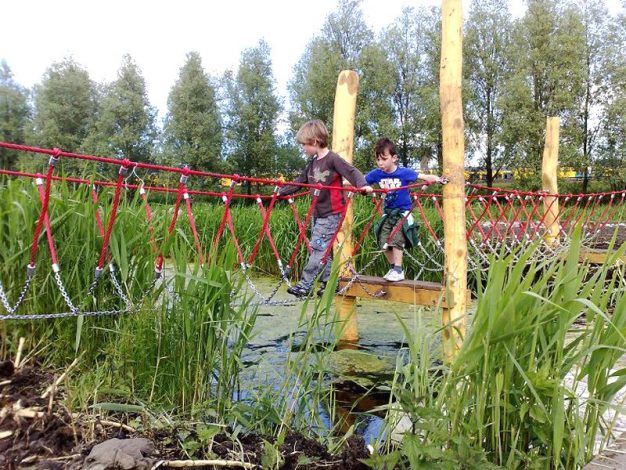 A new pan-European project is examining how innovative nature-based solutions in schools can help to to tackle climate change and its effect on children.

The European COOLSCHOOLS programme is aimed at designing potential social strategies that can contribute to mitigating and adapting to changing world temperatures, and improve citizens’ – particularly children’s – quality of life.

The online-based Universitat Oberta de Catalunya (UOC) is coordinating the three-year study, which is looking at developing ‘climate shelters’ – such as shaded and green areas – in school environments across the continent.

Sixteen partners in total are involved, including municipal authorities, universities, research bodies, social organisations and cooperatives and other international organisations. It aims to build on the work of pilot projects established in major cities including Paris and Barcelona.

The consequences of climate change, says the university, are becoming ‘increasingly frequent and alarming’, particularly in regions like the Mediterranean. This, it adds, has led to an increase in the risks arising from phenomena such as heat waves, droughts, and rising temperatures in cities.

COOLSCHOOLS is about understanding the factors and potential of interventions for what organisers say ‘drive socio-ecological changes towards urban sustainability, climate resilience, social justice and quality education’.

Isabel Ruiz Mallén, project leader and a researcher in the UOC’s Urban Transformation and Global Change Laboratory, said: “COOLSCHOOLS aims to investigate the kind of opportunities provided by the projects being carried out in playgrounds and school environments in Barcelona, Brussels, Paris and Rotterdam.”

Organisers highlight the example of Barcelona, one of the areas most affected by climate change, and how actions to deal with the effects of rising temperatures and increasingly frequent heatwaves will be studied, with the expansion of green areas and shaded areas, and the installation of water fountains in school playgrounds and premises.

“The solutions that are being adopted aim to protect children against these and other risks arising from climate change, and to improve the schools’ adaptation to this new situation,” said Ruiz Mallén.

The idea, she added, is to consolidate spaces in which students can ‘learn and feel comfortable’ in a context of rising temperatures, while also minimizing the impact of greenhouse gas emissions on these educational environments.

Improvements to play areas, increased access to water and more sustainable furniture from various perspectives, including the gender perspective, are also being done.

“What we want to see based on the actions that are being carried out in these four cities is the impact that these interventions are having in terms of urban sustainability, resilience to climate change, social justice and the promotion of high-quality education,” she added.

Researchers will study all these interventions within the context of the impact on biodiversity of changes in land use, and also consider health, safety, and governance.

‘Use of climate shelters by the community’

“Starting this research will enable us to evaluate aspects such as the relationship between greening spaces in playgrounds and the students’ cognitive development, the increase in pollinating insects, and the access to and use of these climate shelters by the community, among many other issues,” said Ruiz Mallén.

“We are also going to investigate the potential of changes in education. With all the knowledge that is generated from the different perspectives, we will be able to produce guides and applications to make the most of its potential both in terms of inclusiveness and improved wellbeing, and take advantage of learning opportunities in terms of climate resilience.”

The UOC research group’s goal is to study and determine the conditions under which climate shelters in school environments can enable governance that leads to urban transformation practices which guarantee inclusion and power sharing for the different stakeholders.