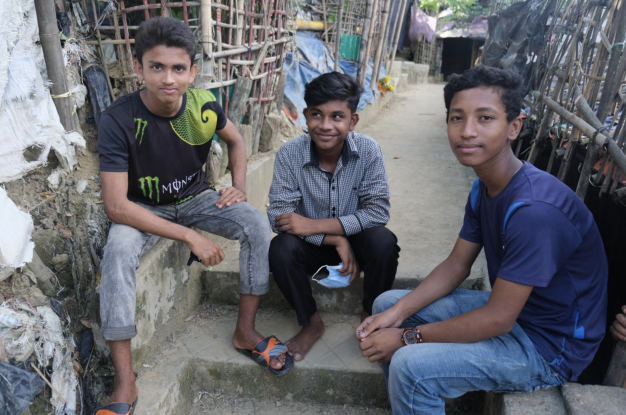 A European Union & UNICEF-led scheme in one of Bangladesh’s major cities is seeing local communities provide a safe and reassuring welcome to refugee children and young people.

The coastal city of Cox’s Bazar is the setting for what is an outstanding example of social cohesion benefiting youngsters who have had to flee persecution in Myanmar.

Children’s charity UNICEF is also playing a major role in the scheme to help both the young people who are part of the Rohingya people, as well some of Bangladesh’s own vulnerable youngsters, needing help in their formative years.

‘Soyaib’ arrived in Bangladesh four years after fleeing Myanmar – formerly known as Burma – yet was afraid to venture outside the refugee camps. He was suffering from trauma after his appalling experiences, and so was unsure of what to expect from the communities of Cox’s Bazar.

He stayed mostly inside, sharing a shelter with seven siblings. He, like most of his peers, had no school to go to but desperately wanted to learn. Then an aid worker told him about a social hub providing Rohingya and Bangladeshi adolescents with life skills, sports activities and a library. Now it is his favourite place, reminding him of his old classroom in Myanmar.

He’s now taken part in various youth leadership schemes and peer-to-peer knowledge sharing at the UNICEF-supported social hub funded by the European Union and operated by the Bangladesh Institute of Theatre Arts. Soyaib wants learn new technologies after completing a basic computer literacy course and is now a voice calling for other Rohingya refugees to have the same educational opportunities that have been given to him.

UNICEF takes up the story:

Through the EU-funded social hub, he met two Bangladeshi adolescents – 16-year-old Jamal and 15-year-old Arifur – who came to the hub, not least because they were curious to meet Rohingya people.

Jamal asked Soyaib if he could give them a tour of the refugee camps. When the Rohingya boy took the Bangladeshi youth to his home, they were shocked to see the dire living conditions of refugees, their childhoods reduced to narrow alleys and dingy tents.

“Jamal said that my place was beautiful,” Soyaib chuckles when sharing the story of how their friendship began. The Bangladeshi boy admits that he didn’t want to offend his friend by saying that his house was way too small.

Nowadays, the boys’ bond is stronger than ever. As they sit or play in the colorful rooms of the social hub, they tell each other about their countries and discuss issues affecting their communities. Soyaib has learned some English by watching online videos and now he’s teaching his friends because he wants to thank them for the support and the sense of belonging that they gave him.

Jamal invited Soyaib to visit his house in Teknaf too. When the youngsters were walking together through the Bangladeshi village, they elicited  a lot of curious glances.

Towards a better life

“Wow! You’ve made friends with a Rohingya. How can we meet other Rohingya like him?” Jamal describes the enthusiastic reaction of the villagers when they met Soyaib. Today, Jamal organizes group visits of Bangladeshi adolescents to the social hub in the refugee camp.

He’s thankful for the opportunities that the social hub provides to acquire life skills and meet like-minded peers. Despite coming from different backgrounds, Rohingya and Bangladeshi adolescents have more things in common than they have difference. They all share the same aspirations of learning, earning and living in peace.