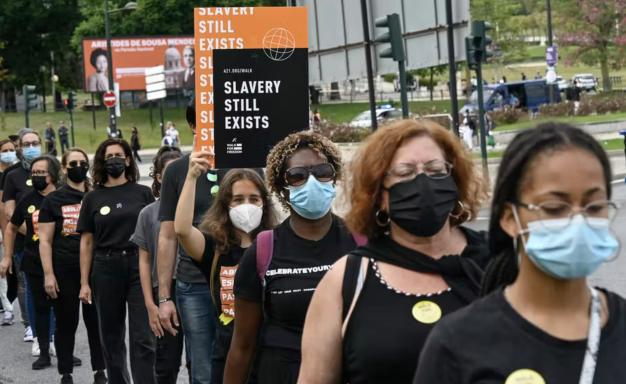 Published on 26-01-2022 at 11:07
Protests around the world aim to end human trafficking. Horacio Villalobos/Corbis via Getty Images

Education leaders across the U.S. are trying to figure out how to effectively teach students about the risks and warning signs of human trafficking, which includes being forced into domestic servitude, commercial labor or sex work.

According to 2019 data gathered by the Polaris Project – a non-profit that fights human trafficking, including sex trafficking – 24 per cent of survivors reported that they were first trafficked before they turned 18.

As cases of human trafficking continue to make headlines, similar prevention and education efforts are being made in schools across the country. Parents and community members in other states may also find similar efforts coming to their communities. As a scholar who studies business ethics – and as executive director of the Center for Ethics and Human Rights at Colorado State University – I recommend school leaders keep five key goals in mind when creating anti-trafficking educational programs.

Childhood researchers suggest that children need a safe haven where they can go when confronted with fear and threats. They also need a secure base, a place where they feel secure to explore the world around them.

Ideally, children’s homes would serve these purposes. But schools can also provide safe havens and secure bases. Children who feel more secure are less vulnerable to predatory people, who often fake affection and provide a false sense of love as a tactic to lure kids into the world of human trafficking.

When being taught about human trafficking, it’s possible that children’s memories of past trauma might be triggered. Educators who are aware of this possibility are more likely to be better at protecting kids from being triggered, and better able to respond properly if it happens.

Many children have been exposed to trauma, such as neglect or abandonment; physical, sexual or psychological abuse; loss of a loved one; or refugee or war experiences. When these memories are triggered, children feel distressed and unsafe.

Triggers may include words, tone of voice, facial expressions, smells, feelings or postures that are embedded in a child’s mind. And some can cause unexpected reactions in seemingly regular situations. For instance, a child whose abusive parent used to eat oranges may be triggered by the smell of an orange, and this memory may became linked with the abusive experience in the child’s mind. Or a common nickname might have been used by an abuser and can be a trigger.

Often, these memories are not conscious ones, so the child may not understand why they feel distressed or overwhelmed, and yet they respond to the trigger as if they are facing a real threat.

When teachers show compassion, warmth and kindness to their students, students are more likely to develop a strong sense of belonging in the classroom space.

Without that sense of belonging, students might come to see themselves as unworthy of attention and love, which hurts their self-esteem and makes them more vulnerable to the influence of predators.

Young white women are often depicted in media as representative of trafficking victims, although women and girls of color experience high rates of trafficking.

Also, women of color who are forced to engage in sexual acts or labor are often stereotyped as deviants and treated with suspicion by officials and law enforcement.

And while boys are less commonly trafficking victims, they are still at risk of being trafficked. In addition, many human trafficking reports do not provide data on nonbinary or gender-nonconforming people.

Trafficking education materials work best when they accurately discuss who the perpetrators are. Effective anti-trafficking education teaches kids that traffickers are not just strangers or people belonging to another race or ethnicity. Traffickers are often friendly, charismatic, well-dressed and seemingly wealthy, and they may appear to be kind and warm. They may also be close family members and caregivers who exploit children in their care.

5. Use appropriate touch and tone

Teachers often use touch and tone of voice to build connections with children. But many children who have experienced trauma are sensitive to touch and avoid it. Teachers who learn how to use touch in reassuring and affirming ways – such as an encouraging pat on the back, an occasional handshake, high-five or fist bump – can help build a sense of safety and security in the classroom, building trust with students and making them less likely to fall prey to traffickers.

Similarly, using consistent tones of voice that are calm, reassuring and firm can help students’ development, engagement, learning and growth.

Schools can play an important role in helping students learn about and protect themselves from human trafficking. With these five concepts in mind, school leaders will be better prepared to help keep kids safe.

Lumina Albert, Associate Professor of Management and Director of the CSU Center for Ethics and Human Rights, Colorado State University