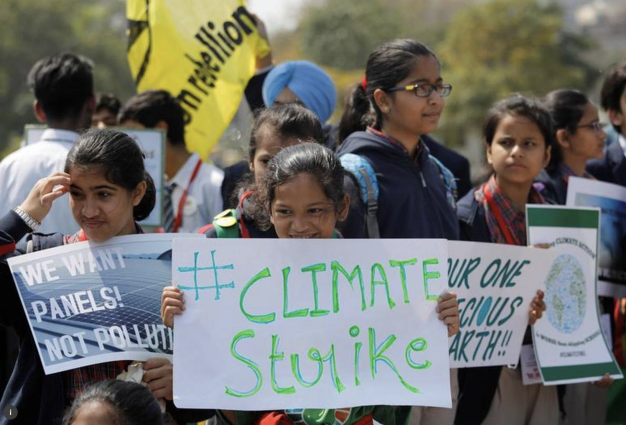 As Maharashtra suffers more extreme weather, officials are planning to launch the first school curriculum in an Indian state on climate change impacts and cutting carbon.

Students in Maharashtra will start learning about worsening droughts, floods and storms on a hotter planet, and find out how to map and reduce their carbon footprint under the first climate-change school curriculum introduced by an Indian state.

The lessons in English and Marathi for grade 1 to 8 pupils seek to spark conversations in homes on extreme weather and rising seas, said officials, as efforts ramp up globally to raise awareness that climate change is not a far-off threat, writes Roli Srivastava.

Better climate education is a key concern for young people, with representatives of the growing youth movement taking centre-stage at the COP26 U.N. climate talks last month to present their demands for a greener, fairer world.

Maharashtra officials said the western Indian state was experiencing extreme rainfall, recurring droughts and cyclones. About 14 million students in more than 100,000 schools will learn what is fuelling these and other climate shifts, in classes likely to be introduced during the next academic year that starts in June.

‘Why public transport is the most climate-friendly option’

“The current curriculum doesn’t cover all this. We want students to understand how climate change is impacting us,” said Sudhakar Bobade, head of Majhi Vasundhara, a state initiative to create awareness on climate change.

“Our aim is to make them understand what they can do to mitigate the impact and create awareness among parents through them,” he said.

The new curriculum will also cover fuels consumed by planes, trains, buses and cars – and help students understand why public transport is the most climate-friendly option, officials said.

The new curriculum of more than 100 lessons will end with “green habits”, aimed at shrinking the carbon footprint of students’ households through behaviour changes such as switching off lights and adopting solar power.

In an October report, the Council on Energy, Environment and Water identified Maharashtra, India’s third largest state, as one of the country’s most climate-vulnerable areas. The state has over the last year paid out $2 billion in compensation to those impacted by extreme weather, Maharashtra environment minister Aaditya Thackeray said at the COP26 summit.

Yusuf Kabir from the U.N. children’s agency UNICEF in Maharashtra, who helped design the new curriculum, said climate change “is real and we can’t deny it any further”.

“We want students to understand how the lives we lead are dependent on fossil fuels, why solar panels are now being used to boil water in tribal schools, why the Arabian Sea is more turbulent and so on,” Kabir told the Thomson Reuters Foundation.

One in five young people across the world think they can no longer do anything to prevent climate change, a poll by a creative agency showed last month. Techniques such as advertising campaigns and computer games have been used to better communicate the threat of climate change to the general public.

In India, youth activists believe including global warming in school lessons could help expand much-needed awareness. Tenth-grade climate activist Ridhima Pandey, 14, said she had not studied climate change in her school in the northern Indian state of Uttarakhand, but had gained an understanding from talking to her parents and reading news publications.

“We don’t discuss climate change or global warming in school. There would be one paragraph on it and the teacher would just skim through,” said Pandey.

She welcomed the new curriculum in Maharashtra but said it needed to teach children knowledge they can use in their lives.

“If they learn in school, the next generation would be more responsible, unlike our older generation. Also they will not have the same attitude as them that has led to so much destruction,” she said.

The Maharashtra curriculum is aiming to get at least some of that right: It includes farm visits to identify crops and how much water they consume, activities such as gauging rainfall and video screenings on rising seas and cyclones.

The lessons will also shine a light on changes being made locally to switch from coal to solar power, as well as on global goals for climate action including the warming targets in the 2015 Paris Agreement, nature protection and air quality.

“If we learn, we will be able to conserve,” said Pandey.

Reporting by Roli Srivastava @Rolionaroll; Editing by Megan Rowling. Republished courtesy of the Thomson Reuters Foundation, the charitable arm of Thomson Reuters, that covers the lives of people around the world who struggle to live freely or fairly.