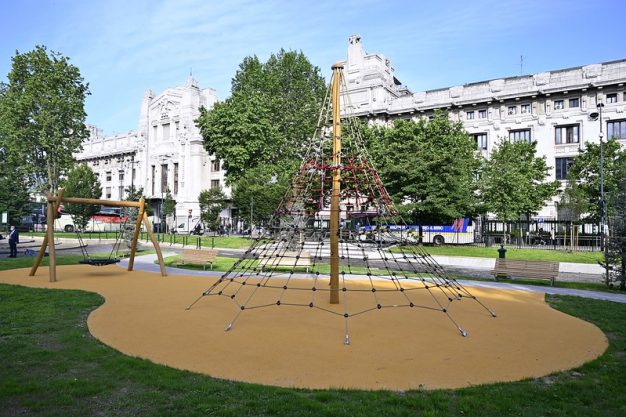 Sensors are being installed in schools across Milan as experts seek to learn more about the effects of air pollution on the health of the city’s children.

The Bloomberg Philanthropies charity, which works towards longer, healthier lives, is working with the Milan city authorities and AMAT, Milan’s appointed air quality monitoring agency, on the scheme, to better understand air quality in the country’s second largest city.

Low-cost sensors are the main focus of an initiative monitoring street-level air quality around schools, while also mobilising actions by local students and the community towards cleaner air. It also supports the European Union’s zero pollution ambitions set out in the European Green Deal.

‘Educate as many as possible about air quality’

Over the next two years around 50 schools over 10 sites will be the focus of the sensor initiative, with AMAT (Agenzia Mobilità Ambiente e Territorio) developing localised data on air quality, and then using digital networks to feed the results into the city authorities to help them with planning policies. The results will also be fed through to schools, parents and the wider community, to help educate as many as possible about air quality.

The Italian Climate Network will also work with publishers Edizioni Ambiente on an educational campaign in schools across Milan, using the air quality data and other resources to help students and their families’ understanding on the sources of pollution and the importance of clean air.

Michael R. Bloomberg, Founder of Bloomberg LP and also the UN Secretary-General’s Special Envoy for Climate Ambition and Solutions, said: “Air pollution is a pressing public health challenge in cities around the world, particularly for children and other vulnerable residents. To better understand the problem in Milan, and rally support to address it, Bloomberg Philanthropies is glad to work with Mayor Sala to deploy a localised air monitoring network at schools across the city. This work will help Milan improve its air quality, and inform similar projects in other cities.”

Milan is among the top ten EU cities with the highest costs and mortality burden stemming from air pollution. Under the leadership of its Mayor, Giuseppe Sala, Milan has taken bold action to tackle air pollution in the city with an ambitious voluntary air quality and climate Plan. This includes restricting polluting vehicles, committing to create a zero-emission area in the city centre by 2030, abiding to the C40 Fossil-Fuel-Free Streets Declaration and strengthening air quality monitoring.

Mayor Sala, who is also Chair of the C40 Global Mayors COVID Recovery Task Force, said: “Milan is at a geographical disadvantage in terms of air stagnation and pollution concentration. Air quality is therefore a key environmental objective. This is why Milan did not stop at defining a Climate Plan: we made it an Air Quality and Climate Plan.”

This latest project builds on Bloomberg Philanthropies’ engagement with local partners and local authorities to design and lead impactful projects that can accelerate action to end air pollution in cities like London, Brussels, Paris, Mumbai, and Jakarta.