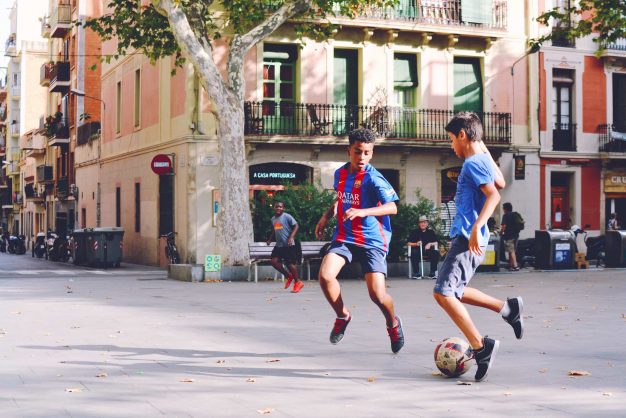 It is often only when we read about the tragic death and legal case of Ella Roberta, the London schoolgirl that died of asthma due to air pollution, or the six-year-old in Madrid who died after being run over by a car that we stand still and think what kind of environment our kids grow up in. But then it is too late. Meanwhile, millions of children suffer.

Our youngest and most vulnerable do not get what they deserve. Our children are our future generation. Most children live in cities which are car dominated, hotspots of air pollution, noise, and extreme heat and lack of green space.

Our urban streets too often look like car parks (cars are parked 96 per cent of the time). This is not the best environment for them to grow up and we should improve it rapidly, Mark Nieuwenhuijsen, director of air pollution and urban environment at ISGlobal in Barcelona, tells Child in the City.

Air pollution reduces children´s brain development, causes obesity and higher blood pressure, lung function reduction and around 200,000 new cases of each childhood asthma in Europe each year. Traffic noise leads to emotional and behavioural disorders. Sufficient green space is important for brain development and provides opportunities for physical activity and social contacts. Too many children do not get enough physical activity for a healthy development. Thousands of children have died over the last 10 years in Europe on the road.

Our recent research with birth cohorts around Europe as part of the EC funded HELIX multi-environmental exposure exposome study showed that children are exposed to too many unhealthy environmental exposures during their childhood and that the urban environment in which they live greatly affects children´s weight growth and brain. For example, air pollution has detrimental effects, while green space showed beneficial effects. These effects are being carried over into adulthood and set up our future generation for poor health.

Children spend a lot of time at school and unfortunately too often we find schools situated in areas with high air pollution and noise levels and that they do not have enough green space in the school playground, all which have a detrimental effect on the health of children (Sunyer et al 2015, Dadvand et al 2015, Forns et al 2016).

Too many children travel to school by car, partly because of the perceived road dangers, while they should walk, cycle or take public transport to get more physical activity and get a sense of independence and community.

As a result, in Barcelona a program, called Protegim Escolas, was started to pacify the traffic around nearly 200 schools in Barcelona, and to create new play areas for kids.  Also the highly popular BiciBus was introduced where kids cycle together to school. Similar initiatives are ongoing in London (TAPAS).

We urgently need to create a safer and healthier environment for our children in our cities and beyond. The presence of cars has been an obvious barrier for children to enjoy our public space, which includes our streets as much as they should. Too often they are told to stay inside or not to travel alone to school because it is too dangerous.  High air pollution and noise levels and lack of green space are also obvious concerns and require action.

Protegim Escolas and BiciBus are great initiatives that need further promotion but we need more.

Immediate actions that cities could take are to introduce and enforce speed limits of 30 km/hr in all streets within the city boundaries to reduce the risk of road injuries and fatalities, and air pollution and noise levels. Also they should introduce 200 meter motorized traffic exclusion zones around schools.

In the short to medium term, they need to change the urban and transport planning and reduce the dependency on cars and car use, and promote public and active transportation to create safer and healthier streets. Cities should remove permanent urban street car parking spaces and replace each space with a tree. New urban models such as the Paris 15 Minute city, Barcelona Superblocks, the London low traffic neighbourhoods, or Vauban, Freiburg car free neighbourhood can create a safer and healthy environment for our children, and contribute to climate action that is needed to provide our future generation with a healthy future.