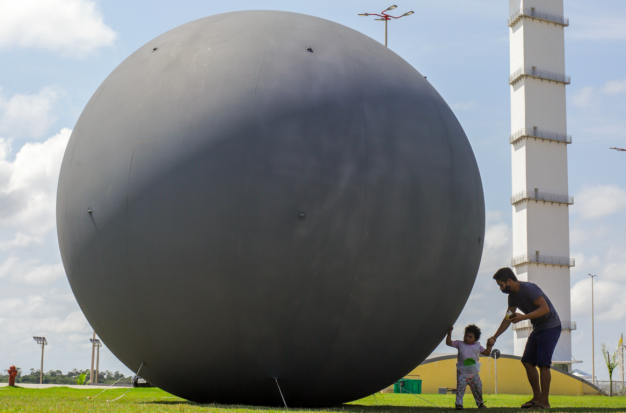 Watch out for a big grey bubble at COP26 in Glasgow in the coming days. The grey inflatable, which represents air pollution, has been touring cities in Brazil to raise awareness of the importance of reducing emissions – not only for the climate, but for young children’s health.

Young children are especially vulnerable to health impacts from air pollution, which can last a lifetime and begin even in the womb: air pollution affects the development of their organs, from brain to lungs. Infants and toddlers breathe air lower to the ground, where pollution from vehicles is more dense, and inhale more air than adults in proportion to their body size, says the Bernard van Leer Foundation.

The grey bubble is part of the Free To Play Outside campaign of the Alana Institute, partner of the foundation. The campaign is engaging parents in the fight against air pollution by mobilising them to share information, join local groups and demand action from decision-makers.

The big grey bubble’s journey started in São Paulo and has since travelled to three other Urban95 partner cities across Brazil.

In Boa Vista, the grey bubble’s visit combined with a tree planting activity for children – an especially pertinent way to connect the early years with the air quality agenda in this Amazonian city. The activity was supported by Família que Acolhe, a public programme that supports children and families from before birth to age six, through integrated access to health, education and social development services.

In Fortaleza, the bubble’s visit marked the opening of a micro park and an announcement that the city has won USD 75,000 in funding from Parceria por Cidades Saudáveis (the Partnership for Healthy Cities). With these resources, Fortaleza will create a regulatory framework for air quality monitoring.

In Niterói, the bubble was part of an event on Icaraí Beach to raise awareness of how traffic contributes to air pollution in the city and promote alternatives such as cycling. The event generated a large amount of interest, with many children and families interacting with the bubble and taking photographs. The Mayor of Niterói, Axel Grael, will also be at COP26.

The big grey bubble is currently scheduled to make appearances in Glasgow for COP26 on 5 November and 6 November at events involving parents, doctors and youth, to call on no new fossil fuels and the health of children.

After Glasgow, there are plans for the bubble to continue its international travel to support advocacy events in Urban95 cities in India and Peru.

JP Amaral, the coordinator of the Child and Nature Programme at Instituto Alana, says: “Brazil has a particular problem with air pollution. Children mainly live in urban areas, affected by pollution from vehicles. But also a huge amount of pollution from the burning of the Amazon forests and other biomes is reaching city populations. Our intention with this campaign is to raise awareness about the impacts of air pollution on children and engage parents and city leaders worldwide to transition to a cleaner air.”

Amaral explains more about the campaign in a video here.

The Bernard van Leer Foundation supports the campaign’s work to raise awareness of how air pollution especially affects young children living in cities. We encourage you to join the movement to demand action on air quality so that all young children – in this generation and future generations – can be free to play outside.