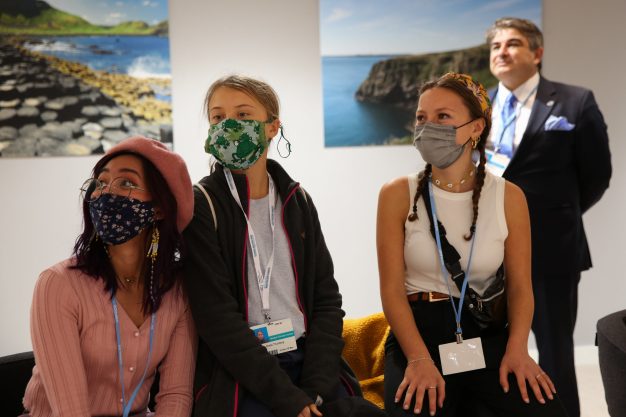 COP26: ‘The climate crisis is a child rights crisis’

‘The climate crisis a child rights crisis’ – that’s the critical message to world leaders at COP26 as more countries are urged to make their climate policies more child-centred.

UNICEF, the UN’s child rights arm, says that while leaders are rightly talking about the impact of the climate crisis on our children, ‘too few are yet to turn these words into meaningful actions’.

Gautam Narasimhan, UNICEF’s Global Lead for Climate, Energy and Environment, was speaking at a briefing for the landmark summit in Glasgow where world leaders are debating how to deliver the goals of the 2016 Paris Agreement and the UN Framework Convention on Climate Change.

“2021 is expected to be one of the warmest years on record, according to our colleagues at WMO, and as the mercury in thermometers rises, so does the pressure on governments to take action on climate change at COP26,” said Narasimhan.

‘Too few leaders are yet to turn words into actions’

“As I speak to you, there have been many statements from world leaders in which the words ‘children’ and ‘young people’ have been mentioned multiple times. But while leaders are once again talking about the impact of the climate crisis on children, too few are yet to turn these words into meaningful actions that actually consider children.

“UNICEF released a new analysis that reveals that two thirds of countries’ climate plans don’t address the needs and priorities of children. We examined the Nationally Determined Contributions – or NDCs – that were updated ahead of COP26, where I am now. These documents are submitted by the countries which had signed the Paris Agreement, and outline the actions they commit to take to meet its goals.”

He said of the 103 country plans, only 35 of them are considered by UNICEF to be ‘child sensitive’. In addition, only one in five reference child rights or intergenerational justice equity in a meaningful way, while only 12 per cent report that children participated in the development of the plan.

Countries are saying the right things about considering and including children but their climate plans leave their promises hollow. Children and young people bring energy, leadership and ideas to the table and yet leaders continue to pay lip service to their demands. The climate crisis is a child rights crisis.

“In August, UNICEF published The Children’s Climate Risk Index which revealed that 99 per cent of the world’s 2.2 billion children – virtually all of them – are exposed to at least one environmental threat, including heatwaves, cyclones, flooding, drought, vector-borne diseases, air pollution and lead poisoning.

“Roughly 1 billion children live in countries that are at “extremely high-risk” of the threats of climate change. These children face multiple, compounding climate shocks, threatening their health, education and very survival.

“Every child and young person alive today was born into a world fully aware of the consequences of inaction on climate change, yet leaders are unable to agree on measures to stop it,” added Narasimhan.

“The international community must use the remaining discussions at COP26 to turn words into action. They must create safer communities for the children affected now and agree on a path forward to prevent the worst impacts of climate change for people everywhere.