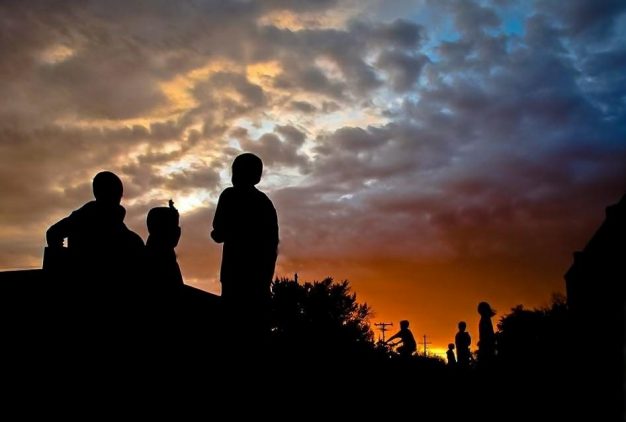 Children born over the past year will, on average, face seven times more scorching heatwaves during their lives than their grandparents under original Paris Agreement emission reduction pledges.

This is according to new research released by Save the Children in collaboration with an international team of climate researchers led by the Vrije Universiteit Brussel (VUB), and also published in the renowned journal Science.

In Afghanistan alone, children could face up to 18 times as many heatwaves as their elders.

Newborns across the globe will on average also live through 2.6 times more droughts, 2.8 times as many river floods, almost three times as many crop failures, and twice the number of wildfires as people born 60 years ago if emissions were to follow the original Paris Agreement pledges.

Children born in Mali could be facing up to 10 times as many crop failures as their grandparents.

Some children might even be hit by several of these disasters simultaneously or in quick succession – exacerbating the effects even further.

Children living in lower-and middle-income countries, as well as in disadvantaged communities, will be worst affected as they are already at far greater risk from waterborne diseases, hunger, and malnutrition, and their homes are often more vulnerable to increased risks from floods, cyclones and other extreme weather events.

Moreover, these climate impacts risk trapping millions more children into long-term poverty and threaten to undo decades of progress in the fight against hunger and stunting.

The data is part of the organisation’s new report Born into the Climate Crisis: Why we must act now to secure children’s rights, and highlights the lifetime exposure to a range of extreme climate-related events on children born in 2020 compared to people born in 1960. The report also outlines the devastating impact of the climate crisis on children if urgent action is not taken, and features first-hand accounts from children in 11 countries on how climate change is impacting their lives, as well as recommendations on how to fight it.

Under the original Paris Agreement emission reduction pledges, global temperatures will rise by an estimated 2.6 to 3.1 degrees above pre-industrial levels—which would have an unacceptable impact on children, Save the Children said.

Under these pledges, children born in 2020 will face on average twice as many wildfires, 2.8 times more crop failures, 2.6 times more droughts, 2.8 times more river floods, and 6.8 times as many heatwaves during their lives than people born in 1960.

The organisation emphasised there is still time to turn this bleak future around. If warming is limited to 1.5 degrees, the additional lifetime exposure of newborns to heatwaves will drop by 45%; by 39% for droughts; by 38 per cent for river floods; by 28 per cent for crop failures, and by 10 per cent for wildfires.

’There is still time to turn this bleak future around’

Aslam*, eight, lives with his widowed mother in a Rohingya camp in Bangladesh, where floods have regularly hit over the past months. As their shelter flooded up to their waists, they lost all of their food and had to flee to higher ground. They returned to their shelter, but as the floor was still wet and muddy, they could not cook or sleep there. He said: “When the floodwaters entered our house, we went up to the hill. Our food, stove, clothes are all wet. We can’t stay at our house because of the wet soil. If the house is rebuilt, we will be able to stay in the house again. We can’t cook rice in the house. Now I will go to [a distribution point] for food. I will bring food from there and then eat.”

Inger Ashing, CEO of Save the Children International, said: “Our report shows the terrifying reality for this generation and future ones if we don’t act now. Children in low- and middle-income countries and disadvantaged communities will be the worst affected, but every child will feel the ravaging impact of this climate emergency.

“The recent heatwaves in the US and Canada, the wildfires in Australia, the recent floods in Europe and China, the multiple droughts, which are driving food crises in places such as Afghanistan, Madagascar, and Somalia, have clearly shown that nowhere is safe. Without urgent action, we will be handing over a deadly future to our children.”

The report also reveals that:

Ms Ashing continued: “The climate crisis is a child rights crisis at its core. We need to scrap our dependency on fossil fuels, set up financial safety nets and support the hardest hit people. We can turn this around – but we need to listen to children and jump into action. If warming is limited to 1.5 degrees, there is far more hope of a bright future for children who haven’t even been born yet.”

Save the Children said that action on climate change is not only a moral obligation but also a legal one for governments to act in the best interests of children.

Despite this, children are routinely left out of key decisions on the issue, even though it affects their lives most, and for decades to come. Children need to play a key role in decisions on climate change, particularly those impacted by inequality and discrimination, the organisation said. Governments not only need to listen to children but also act upon their recommendations.

To limit the impact of climate change on the lives of millions of children, Save the Children is calling for: a limit on global warming to 1.5 degrees, including by rapidly phasing out fossil fuels; an increase in climate financing to help children and communities adapt to the climate crisis; put children’s voices, demands and rights at the centre of climate commitments; and invest in safety nets for children and families threatened by the climate crisis.

text: Save The Children International