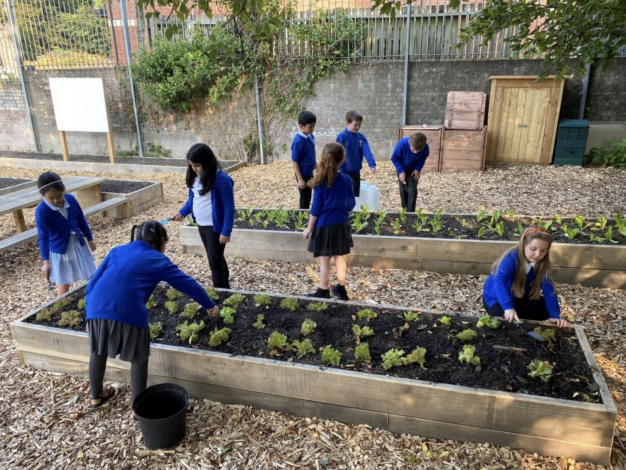 Ten primary schools in the Welsh capital, Cardiff, are being given ‘Edible Playgrounds’ through a partnership that could help the city achieve UNICEF child-friendly status.

Cardiff Council is working with Trees for Cities, the UK’s only charity dedicated to improving cities by planting trees in cities, on this latest initiative which ties in with the Cardiff 2030 Vision, which focuses on education and learning environments.

The council invited various schools to take part in the Edible Playground initiative which was gradually cut down to 10, based on varying criteria including the playground site’s suitability. Trees for Cities then worked with the schools to create a playground design where grown food could be accessed across the entire school. The charity has given each school everything it need to successfully grow its own food, as well as provide an outdoor teaching space for a whole class.

Design work has already begun in seven of the 10 projects, with the first build already completed. Each project is delivered so that it meets the requirements of the new Welsh curriculum. Edible Playground projects have already been established in other UK cities and towns such as Liverpool and Sunderland.

David Elliott, Chief Executive at Trees for Cities, said: “We are delighted to be working in partnership with Cardiff Council to design and deliver a range of exciting and inspiring food growing projects to Cardiff schools. This initiative will allow pupils to benefit from greener spaces in their playgrounds, access more outdoor lessons and understand in greater depth about where their food comes from.”

Cardiff is the first city in Wales to participate in the UK committee for UNICEF (UNICEF UK)’s national Child Friendly Cities  and Communities initiative. City leaders are aiming for Cardiff to be recognised as a Child Friendly City (CFC), defined by UNICEF as ‘a city with children and young people at its heart, where the rights of children and young people are respected by all, a great place to grow up’. Click here for more on the city’s work in this area.

Trees for Cities has already delivered some 180 Edible Playground projects across 14 UK cities since the programme began in 2005, and it hopes that the partnership with Cardiff Council can be expanded for another three years to include a further 30 to 40 school projects, including air quality, tree planting and holistic greening projects.

‘This will allow pupils to benefit from greener spaces’

This, says the charity, would include extensive collaboration with schools and local community groups to support Cardiff in helping deliver its Cardiff 2030 Vision, and Trees for Cities to ‘strive towards becoming the national lead for transforming urban school grounds into leafy green oases for children’s health and wellbeing’.

Councillor Sarah Merry, from Cardiff Council, said: “Children and young people have the right to live a healthy life, and this project further supports Cardiff’s ambition of becoming a UNICEF UK Child Friendly city, where the voices and views of children are at the heart of everything we do.”

Click here for more on Trees for Cities’ Cardiff project.