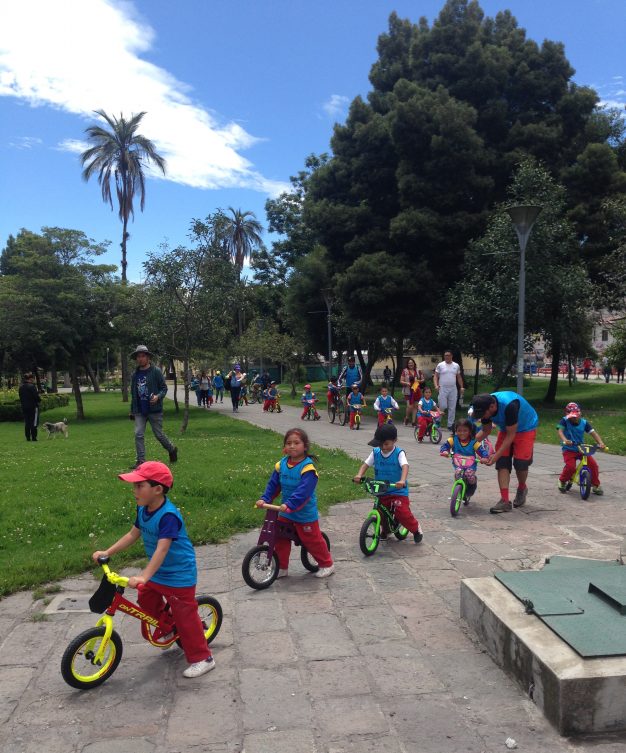 Published on 10-09-2021 at 10:26
Published by kind permission of Amanda Padilla and school authorities

Promoting cycling in and around schools is the aim of an innovative new project, The Cycling Games, which is bringing together urban mobility experts from across the globe.

This event concept is based on a Danish methodology of ‘learning by playing’, and evolved from the World Bike Forum in the Ecuadorian capital, Quito, in 2019.

The aim of the forum, which is held annually, is to raise the profile of cycling in urban areas and, says architect Amanda Padilla, ‘show its potential for improving mobility and the environment in cities’.

At the Quito event there were two main objectives around the Cycling Games concept: first, to run short-term workshops that encourage the teaching of cycling culture to young people, based on the Danish methodology – Denmark is consistently held up as an example of how safe cycling can be made for all ages – and second, a longer-term project to implement a pilot project in schools.

‘Positive reception of the project’

Amanda is passionate about designing schools that draw on input from all those around, and has written extensively about the importance of what she calls ‘participatory design’. On 18 September she will be doing a joint presentation on the Cycling Games, where she will be joined at this year’s World Bike Forum in Argentina – over Zoom – by fellow architect Lotte Bech, from Urban Cycle Planning in Denmark.

“The pilot project is a long-term objective and is being executed with the support of the Biciaccion Organisation at the INEPE School in Quito,” she tells Child in the City.

INEPE is a state school which prides itself on having an understanding of each individual student’s needs, and it was heavily involved in the 2019 event and pilot. And despite the obvious physical barriers which the global pandemic has put in the way, this work has very much carried on through to the present, with Amanda continuing to work with the school in a ‘virtual’ capacity. More about the pilot project is available via the Facebook page.

At the forthcoming forum Amanda will present details of the pilot scheme, while Lotte will talk about how the project is being adopted worldwide, and the scale of its potential.

“Simultaneously, surveys were conducted which demonstrated positive reception of the project and results such as improved physical ability and social skills, and the full article about the impact of the project was published last year by the Cycling Embassy Denmark,” adds Amanda.

The concept was developed by the Danish Cyclists Federation in collaboration with Hylet kindergarten in Copenhagen, and the programme’s success was made possible by funding by Urban Cycle Planning and Danish road safety specialists ITS Teknik.

In the report, Amanda highlights how the lockdown imposed in Quito, which lasted over two months, had shown how mobility ‘had to change to avoid contagion’, and that people using bikes and the city improving its network was a new goal that city leaders were trying to achieve.

“Small seeds like the Cycling Games project within the educational system in the city promotes a sustainable future, but also a new way of living that present and future generations will come to terms with.

The study, she says, shows the insight that it’s possible for the Cycling Games project to have potentially have an impact on a small scale, but also grow to an even greater one. “The potential is one where Quito improves its mobility infrastructure to cope with the public health crisis and it includes all sectors, like children, thinking of them not only in the future, but as part of the solution in the present,” she adds.

Amanda and Lotte will be presenting the concept of the Cycling Games at this year’s World Bike Forum in Rosario, Argentina, on 18 September at 11am Argentina time (CET-4). Last year’s event took place virtually in Nepal.

“I hope the initiatives will attract people to collaborate with the project from Quito,” adds Amanda.