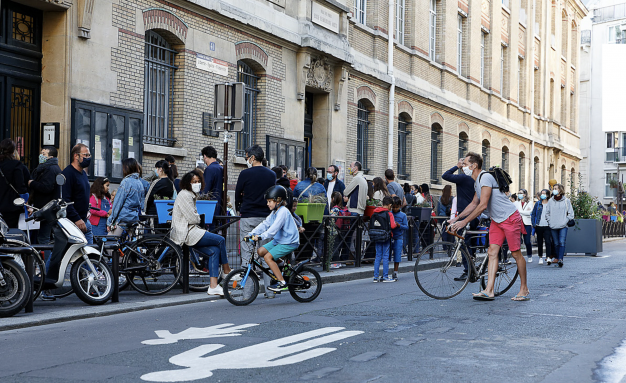 ‘Streets to schools’ rolled out in Paris and speed limits cut

Paris has introduced a dedicated series of ‘streets to schools’ as it looks to make the city safer for children.

Streets with schools and kindergartens are being pedestrianized with street signage that makes it clear children’s safety is paramount, and that cars and vehicles are not permitted and not welcome.

The initiative ties into a wider strategy introduced by the authorities to make the city safer for pedestrians, which includes the introduction of a new 30km/h speed limit on nearly all of its minor roads.

As of Monday 30 August, virtually all roads apart from vital boulevards and the main périphérique ring road are subject to the new limit. Mayor Anne Hidalgo, who has pledged to cut vehicle numbers, says the city wants to achieve the triple aim of cutting and noise pollution, while ‘readying’ itself to tackle climate change.

The ‘streets to schools’ initiative is all about making the environment around schools more secure, and safer for children to get to and from school on foot. That also means fighting pollution by restricting or completely eliminating vehicle traffic.

About two thirds of Paris’s streets already operate under the 30 km/h limit, while many others have either been cut to single lanes or dedicated entirely to pedestrians and/or cyclists. This is a major issue for families and children who every day have to battle through busy streets as they travel to and from schools and leisure activities.

A survey of Parisians by the council found that around 60 per cent were in favour of the 30km/h limit, while half cited road safety as the main reason for their views. One in four said cutting noise pollution was their main reason.

Click here for more information from the city council on ‘streets to schools’ (in French), including a map of which areas of Paris are affected.

Click here for more on the 30km/h speed limit.