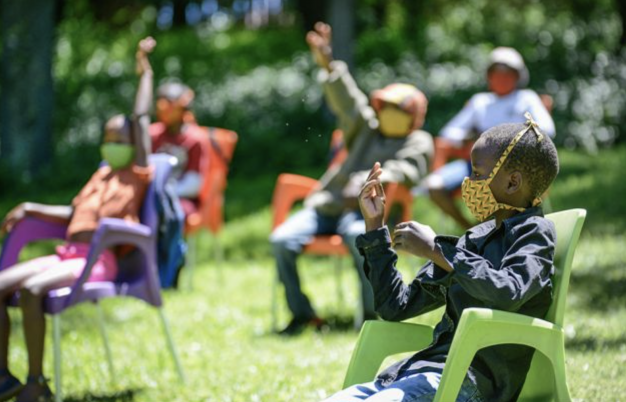 Published on 19-08-2021 at 09:00
Young participants of The Hub's Skills & Soup programme in Morija, Lesotho eagerly raise their hands to answer a question at a session led by facilitators from the Maseru-based NGO, Kick4Life. November 2020. Credit: M. Hyöky/UNAIDS

The final report from the Start Free, Stay Free, AIDS Free initiative warns that progress towards ending AIDS among children, adolescents and young women has stalled and none of the targets for 2020 were met.

UNAIDS is an alliance of 11 United Nations charities and partner organisations, and it says almost half the world’s 1.7 million children living with HIV were not on treatment in 2020, and 150,000 children were newly infected with HIV, four times more than the 2020 target of 40,000.

Shannon Hader, Deputy Executive Editor of UNAIDS, said: “Over 20 years ago, initiatives for families and children to prevent vertical transmission and to eliminate children dying of AIDS truly kick-started what has now become our global AIDS response. This stemmed from an unprecedented activation of all partners, yet, despite early and dramatic progress, despite more tools and knowledge than ever before, children are falling way behind adults and way behind our goals.”

‘The inequalities are striking’

“This is about children’s right to health and healthy lives, their value in our societies.  It’s time to reactivate on all fronts—we need the leadership, activism, and investments to do what’s right for kids.”

Start Free, Stay Free, AIDS Free is a five-year framework that began in 2015, following on from the hugely successful Global Plan towards the elimination of new HIV infections among children by 2015 and keeping their mothers alive. It called for a super Fast-Track approach to ensure that every child has an HIV-free beginning, that they stay HIV-free through adolescence and that every child and adolescent living with HIV has access to antiretroviral therapy.

‘Address the needs of our most vulnerable – our children’

Ren Minghui, Assistant Director-General of the Universal Health Coverage/Communicable and Noncommunicable Diseases Division of the World Health Organization, said: “The HIV community has a long history of tackling unprecedented challenges, today we need that same energy and perseverance to address the needs of the most vulnerable – our children. African leaders have the power to help us change the pace of care and should act and lead until no child living with HIV is left behind.”

Although the 2020 targets were missed, the 21 focus countries in Africa made better progress than the non-focus countries. However, there were major disparities between countries, and these countries still bear the highest burden of disease: 11 countries account for nearly 70 per cent of the ‘missing children’ – those living with HIV but not on treatment. There was a 24 per cent decline in new HIV infections among children from 2015 to 2020 in focus countries versus a 20 per cent decline globally. Focus countries also achieved 89% treatment coverage for pregnant women living with HIV, compared to 85 per cent globally, but still short of the target of 95 per cent, and there were huge differences between countries. For example, Botswana achieved 100% treatment coverage, yet the Democratic Republic of the Congo only reached 39 per cent.

UNAIDS and its partners will continue to work together to develop new frameworks to address the unfinished agenda. New targets for 2025 were officially adopted by United Nations Member States in the 2021 Political Declaration on HIV and AIDS: Ending Inequalities and Getting on Track to End AIDS by 2030 in June this year, providing a road map for the next five years.