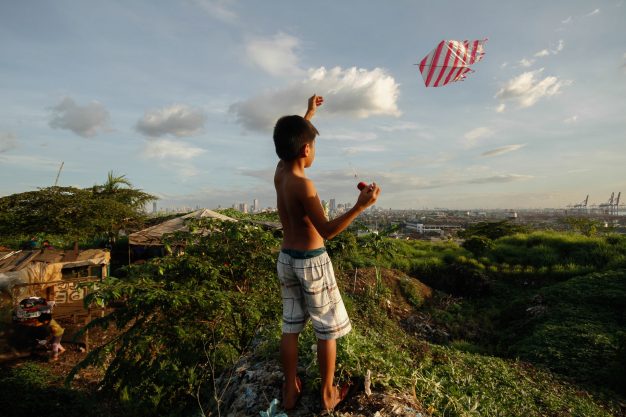 Published on 22-07-2021 at 10:54
Poverty and Environment Fund (PEF), Smokey Mountain Remediation and Development Project - A local child plays with his kite atop Smokey Mountain’s highest peak. No longer an open dumpsite, its story is sadly repeated at nearby slums in Manila. Poverty remains one of the biggest problems facing the Philippines today. With no clear solutions in sight, cooperatives like the SMPK are essential in improving the lives of the urban poor.

Children living in ‘fragile cities’ are among those most susceptible to the effects of climate change, but we can help them adapt and be part of the solution, according to a new report.

This policy brief developed jointly by a trio of children’s rights organisations explores the link between ‘fragile’ cities – those which cannot or will not deliver on their social responsibilities – and the children living there, and climate change.

It does, however, also highlight various case studies which show how some organisations can and do work effectively on climate actions in cities with and for children, and gives some recommendations for how key organisations can help ensure children’s rights for a healthy and sustainable future are upheld.

Tackling a Double-Threat: Children at the Front and Centre of Urban Fragility and Climate Change, was produced by World Vision, Plan International and UNICEF as part of the World Urban Campaign. All three are all part of the Global Alliance – Cities 4 Children, an interdisciplinary alliance of 22 member organizations working together to ensure that child rights are firmly embedded in the urban agenda.

Climate change, they say, is a ‘threat multiplier’, in that it disproportionately affects the most vulnerable girls and boys. Though children are the least responsible for climate change, those living in urban informal settlements, as well as fragile and developing contexts, are among the most susceptible to its ravages.

‘Slums are not safe places for children’

“Slums and informal settlements, – especially those in fragile cities – are not safe places for children and young people,” says the paper. “Without adequate safe spaces to learn, develop and grow in a healthy environment, they are exposed to violence and exploitation of all kinds. The lack of basic infrastructure, such as adequate street lighting, also makes girls and women particularly vulnerable to violence and harassment.”

And it is this ‘fragility’ of many urban areas which makes it difficult for families to seek a better life and contributes to existing inequality and marginalisation. Furthermore, ‘compounded challenges jeopardise development prospects, as well as progress towards achievement of the 2030 Agenda and the Sustainable Development Goals (SDGs) in many countries’.

The report continues: “Climate change drives child vulnerability and risks reversing gains in both children’s rights and SDG achievement. Extreme weather events disrupt livelihoods and education, whilst increasing hunger and malnutrition. The socioeconomic effects of weather events also intensify the conditions which lead to violence against children – especially child labour and child marriage. Children’s specific development needs mean they are especially vulnerable to its impacts. Exposure to outdoor and indoor air pollution in urban areas often leads to chronic, and sometimes fatal, respiratory diseases such as pneumonia, bronchiolitis or asthma.

“Rising global temperatures and threatening urban heat are increasing both the frequency and intensity of extreme weather events, such as floods, droughts and storms, as well as the spread of tropical diseases. As an urban area’s population grows, so too does its risk of and vulnerability to natural disasters and climate change consequences, including deteriorated air quality, water availability and quality, land use and waste management. All these new and multiplying phenomena put new pressures on existing urban systems and lead to costly impacts on basic services, infrastructure, housing, human livelihoods and health in cities.”

Indonesia and The Philippines are held up as examples of how ‘urban resilience’, made possible by effective decision-making by local and national governments, can help build the capabilities of vulnerable children and young people to adapt to the very real threats posed by climate change, such as flooding.

In eight settlements across the countries’ respective capitals, Jakarta and Manilla, the Urban Nexus programme trains children on disaster risk reduction and urban planning. They are also shown how they can engage with local authorities, and ensure their voice is heard in the decision-making process. As a result of this programme, young people become Youth Innovators

“Our extensive experience working with girls, boys and families impacted by urban vulnerabilities in developing countries, including those living in urban slums, informal settlements and fragile cities, gives us an exclusive insight into many of the world’s most vulnerable members of society,” adds the report.

“We therefore call on governments and the international community to ensure children’s rights to a healthy, safe and sustainable future,” it concludes.