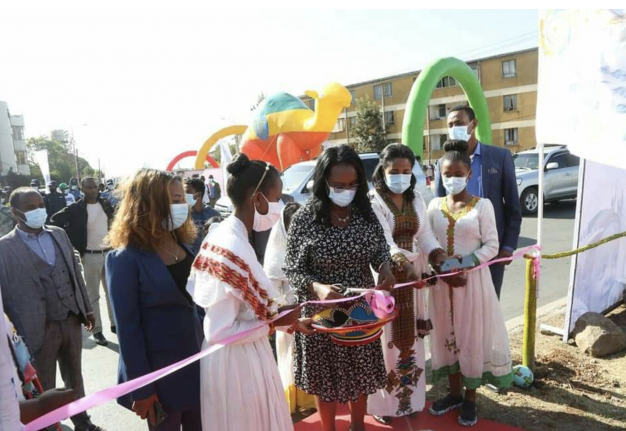 The Ethiopian capital, Addis Ababa, will become the next city to reap the benefits of the Bernard van Leer Foundation’s expertise through the establishment of a new early years initiative.

Children: The Future Hope of Addis Ababa is the result of a partnership between BvLF, well known for its global projects, and children’s charity the Big Win Philanthropy, which will work with city leaders on a programme to provide universal access to a full range of early childhood services within the next four years.

Around 330,000 low-income households will initially be targeted, through health and social support services that include parent coaching sessions through home visits. The city will also widen its built infrastructure, including the development of 16 daycare centres, 14 model preschools and 10 outdoor playgrounds. It will. also designate 30 roads to be set aside on Sundays as safe spaces for children to play.

Adanech Abibie, Mayor of Addis Ababa, said: “Early childhood development is a top priority for the Addis Ababa City administration. We want to ensure that all children in this city have the best start in life, helping to create a better future for themselves and for Ethiopia.”

BvLF describes Ethiopia as a country that is ‘rapidly urbanizing’, with Addis Ababa’s population set to exceed 6.5 million, about a fifth of whom are aged under six, and expected to double in the next decade. The country, it adds, sees investment in the early years as an ‘integral part of its ambition’ to achieve lower-middle-income status by 2025.

Cecilia Vaca Jones, Executive Director of the Bernard van Leer Foundation, said: “With its holistic approach, this initiative is designed to enhance early childhood development outcomes for young children and caregivers in Addis Ababa. We are honoured to be a partner in this pioneering initiative.”