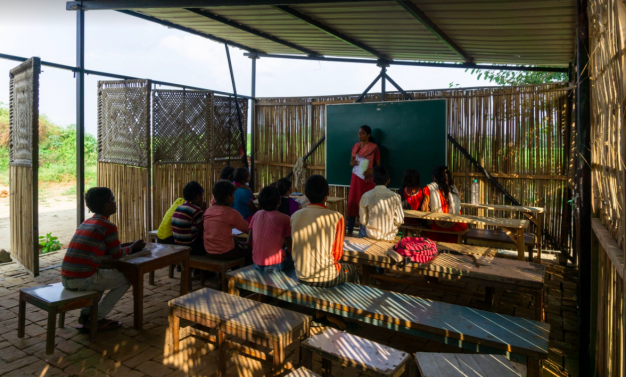 A low-cost school that is easy to build and dismantle can meet the educational needs of migrants and those living in informal settlements across India.

Swati Janu, the designer of ModSkool is also urging cities to do more to remove the constant threat of eviction.

ModSkool was designed for the children of farmers living along the Yamuna river in Delhi after their school was demolished. It was built with locally-sourced materials such as bamboo and dried grass in just a few weeks by the community, writes Rina Chandran, Thomson Reuters Foundation.

The project, by Delhi-based Social Design Collaborative, last month won the renowned Beazley Designs award for architecture for 2020. “ModSkool is about the right to city – whose city is it, and who gets to decide?” said Janu, founder of the non-profit organisation.

“But over time we realised that it deals with the symptom, without tackling the problem of a lack of permanent housing for migrants and other poor communities who constantly face the threat of eviction,” Janu told the Thomson Reuters Foundation.

More than 107,600 people were forcibly removed from their homes in India in 2019, according to data from the Housing and Land Rights Network (HLRN) non-profit in Delhi.

Nearly half of all evictions were for so-called city beautification drives, besides infrastructure projects, conservation schemes and disaster management, it said. Evictions can have devastating impacts on children’s access to learning, even though the right to education is a fundamental right in India, said HLRN’s executive director Shivani Chaudhry.

“Relocation to remote sites and conditions of homelessness force many children to drop out of school, especially girls. Often children cannot afford to continue studying. The single act of home demolition destroys not only a physical house, but the potential of a better life for affected persons, especially children,” she added.

‘It helped create a sense of ownership and pride’

When the original school for farmers’ children by the Yamuna was demolished in 2011 – leaving about 200 children without access to learning – a social worker approached Social Design Collaborative to help find a solution.

With community involvement, Janu and her team designed a steel frame that could be easily erected and dismantled, with the walls, doors and windows made of bamboo, reused wood and dried grass – materials that the farmers used for their homes.

“Not only was this approach the most affordable, it also helped create a sense of ownership and pride within the community when they saw their building materials and processes adopted in the school,” Janu said.

With the help of crowdfunding, the school was built in 2017 by the students, community members and volunteers. But it had to be dismantled a year later because of a land dispute, and rebuilt in 2019 at another location.

Nearly 15 million people in India live under the threat of displacement, according to HLRN, with evictions likely to pick up as the government fast-tracks projects to boost economic growth in the wake of the coronavirus pandemic. Federal authorities last year approved a plan to develop affordable rental housing for migrant workers in cities.

Nearly 15m people in India live under the threat of displacement

Informal schools will always have a place as they are vital to communities who may lack access to formal schools, said Janu, who has received several enquiries about ModSkool in other parts of the country.

“Many more informal schools popped up during the lockdowns, when schools were closed, since not all students had access to online learning,” Janu said. “We need to acknowledge and legitimise these spaces.”