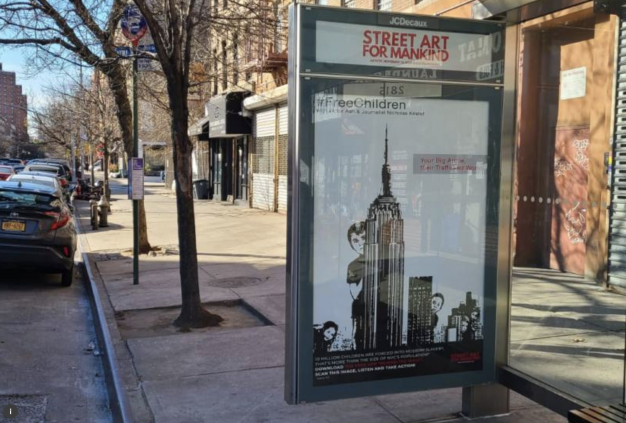 Children’s faces appear locked in the jaws of a sinister factory robot or warily peeping out behind New York landmarks in an interactive street art campaign launched this week to raise awareness about child trafficking and underage labour.

“Street art is cross-generational, cross-cultural. It really attracts everybody,” said Audrey Decker, the charity’s co-founder, who teamed up with the U.N. International Labour Organization and other groups on the #freechildren campaign.

“It’s such a great tool to raise awareness on these issues, because child labor and trafficking are issues people don’t necessarily want to hear about,” she told the Thomson Reuters Foundation in a video call.

More than 150 million children are engaged in child labor globally, with about half carrying out dangerous work in sectors such as construction, agriculture, mining and manufacturing.

The United Nations said last month urgent action was needed to meet a goal of ending child labor by 2025, warning that COVID-19 could undo progress towards tackling it and declaring 2021 as International Year for the Elimination of Child Labour.

Child trafficking is more common in poorer countries where child labor is widespread, according to the U.N. Office On Drugs and Crime.

Street art is cross-generational, cross-cultural, it really attracts everybody

Street Art for Mankind has launched several campaigns since its creation in 2015, such as an Art Walk in the financial district of Manhattan in 2019 with freedom murals depicting stories of survivors of child labor and trafficking.

As a way to further engage passersby, the new campaign includes an augmented reality application that lets users hear experts explaining the issues and artists sharing the stories behind their works of art.

Users of the app are also given suggestions on what they can do to help tackle child labor.

“(They) need to take into account different local realities and avoid blanket bans that can be detrimental to the wellbeing of children and endanger the survival of their families,” said Pankhurst, who coordinates Young Lives, a global study of childhood poverty following 12,000 children over 15 years.

Victor Ash, one of the artists whose work features in the new campaign, said he hoped to make people think about the issue.

“I don’t know if Mr. Everybody who passes in front of my painting can do anything, but at least he can be aware of what’s happening,” the Copenhagen-based artist said in a video call.

Thomson Reuters Foundation is the charitable arm of Thomson Reuters, that covers the lives of people around the world who struggle to live freely or fairly. Visit http://news.trust.org)