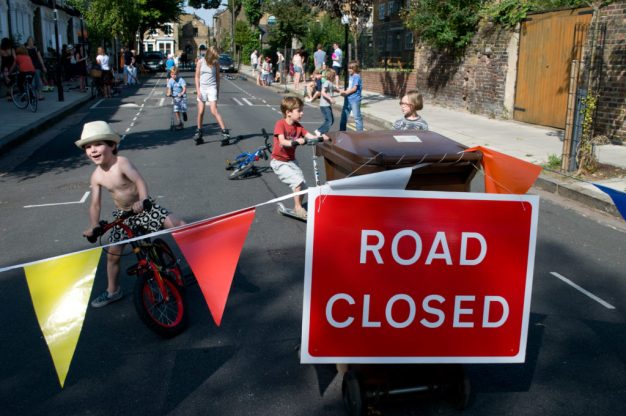 A new report says half of all UK schools in towns and cities could easily roll out the ‘School Streets’ initiative aimed at improving local air pollution and road safety.

School Streets restrict traffic on roads outside of schools at opening and closing times in a bid to reduce air pollution, improve road safety and encourage children to walk or cycle to school.

Traffic restrictions can be enforced by using road signs, temporary bollards and occasionally automatic number plate recognition cameras. The report, commissioned by campaign group Mums for Lungs and environmental charity Possible, says one in five schools located on a main road could have a School Street by closing an adjacent side street.

The proportion of School Streets in cities like London, Leeds, Bristol and Birmingham, also has the potential to increase to two-thirds, says the report. Based on average car emissions, rolling out School Streets in these four cities could potentially cut air pollution by up to 64,000kg a year and carbon emissions by up to 12,000 tonnes per year.

Air pollution impacts significantly on children because of their vulnerability and unequal exposure, not least their exposure from the school run, where air pollution levels have been found to increase by up to five times. By reducing the number of cars around a school, the authors have highlighted that this can help protect children from the dangers of air pollution, as well as wider road danger.

In December a coroner in London delivered a landmark ruling that nine-year-old Ella Kissi-Debrah, who died in 2013 after an acute asthma attack, was the first person in the UK – and possibly the world – to have ‘excessive air pollution’ recorded as an official cause of death. She had lived very close to one of London’s main arterial roads, and over several years had been breathing in toxic fumes produced by traffic.

The report says: “It is unacceptable that so many children in the UK are still exposed to levels of air pollution that have life-long impacts on their health and development and can be deadly. The majority of parents are concerned about the impacts on their children’s health but may not be aware that they can make a difference.

Breathing clean air on the school run, and indeed all day, must be paramount

“School Streets are a small but achievable measure that parents can lobby for that can help reduce air pollution and traffic danger on the school run,” it adds.

Jemima Hartshorn, founder of Mums for Lungs, said: ‘Breathing clean air on the school run, and indeed all day, must be paramount. To protect our children as well as future generations, we need to see an immediate mass roll-out of School Streets along with other measures that can clean up our air across the country. We are standing together to beat Covid19 – let’s stand together to beat this public health crisis of air pollution too.”

“They’re quick, they’re cheap, they’re popular, they target protection where it’s most needed and our new analysis shows that they could be rolled out tomorrow across half of all schools in England’s towns and cities. The Secretary of State must now make good on his promise and give all local authorities the same powers as London boroughs to protect children from toxic air.”

The UK government said in December it was delivering a £3.8 billion plan to clean up transport and tackle NO2 (nitrogen dioxide) pollution, and that through its ‘landmark’ Environment Bill it was also setting ambitious new targets focused on reducing the impact of pollution on public health. Its Clean Air Strategy, published in 2019, sets out the government’s aims.

The World Health Organization says that air pollution kills an estimated seven million people worldwide every year, and that nine out of 10 people breathe air that exceeds WHO guideline limits containing high levels of pollutants.

Great article, and also thanks to Mums for Lungs and Possible. It’s wonderful to see parents around the world advocating for cleaner air and safer streets, helping to make our cities better for children: https://streets-alive-yarra.org/better-for-children/