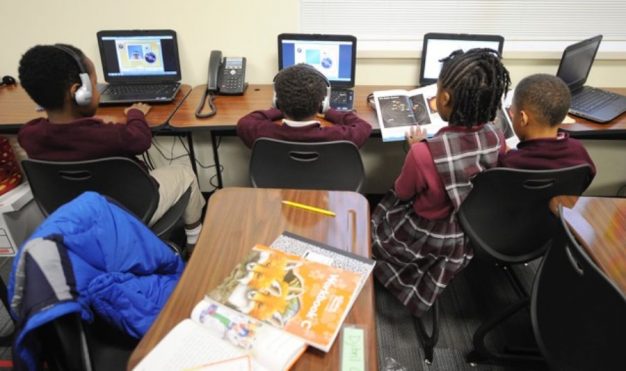 Chicago Connected — the city’s ambitious initiative to help low-income students get online — has provided tens of thousands of families with free internet since it launched last summer and has become a national model for confronting the digital divide.

It has also been a study in the challenges of rapidly addressing the connectivity issue, despite the benefit of major philanthropic firepower and political will.

From skepticism about the free offer to limits on wiring illegally converted basement dwellings, the program, now replicated in cities such as Philadelphia, still faces obstacles to signing up some residents who need it. Some families qualified after they were already locked into internet contracts and, at least until now, they have not been able to switch to Chicago Connected — though that will become an option going forward for those whose income has changed significantly.

Chicago schools are reopening to students this week, but remote learning isn’t going away: Most students are sticking with it, and even most of those slated to return in person on Feb. 1 will continue learning from home three days a week. The program has now enrolled just over half of the 100,000 students it set out to connect — a goal officials say they are still on track to hit by the school year’s end.

They say it’s by design that the initiative is gradually building up to that goal. The program recently broadened and simplified its criteria for enrolling families, casting a wider net for those who can benefit. The district said more than 235,000 students eligible for subsidized school lunch now qualify.

“There have been a lot of families coming to their schools saying, ‘We should be eligible, and we’re not,’” said Daniel Anello of the nonprofit Kids First Chicago, which helped spearhead the program. Now, “We are giving schools the opportunity to work with their families.”

School districts across the country continue to confront the issue of internet access for students, which has proven thornier than providing computers to those who need them. Educators have complained that even some Chicago Public Schools campuses don’t have reliable internet. Pressed by aldermen on the issue, district officials said this week they are working on doubling bandwidth on campuses ahead of bringing back elementary students Feb.1, when many teachers are slated to live-stream their in-person lessons to students who log in remotely.

Yolanda Williams, the mom of an eighth grader who has Down syndrome, said she was thrilled when her family qualified for the program last summer. Williams was featured as a “parent ambassador” in a promotional video for Chicago Connected with Lightfoot and Jackson. She said the program has helped enormously: She and her daughter used to rely on a hotspot used by a relative living next door, making for a slow and unreliable connection.

Mayor Lori Lightfoot announced the launch of Chicago Connected in June: a first-of-its-kind partnership between the city, philanthropies and internet companies. The school district and city had drawn some criticism for taking a somewhat hands-off approach to connectivity while the mayor’s office negotiated with internet companies about a collaborative effort to address the issue.

Families qualifying for the program would receive wired high-speed internet through Comcast and RCN or mobile hotspots from T-Mobile. About 100,000 children needed these services, the city estimated at the time. The expected four-year cost of $50 million would come from philanthropic organizations and federal stimulus dollars in the first two years and from the school district in years three and four.

The school district said more than 36,560 households have signed up; almost 55,000 students are benefitting from the service, officials estimate.

Several dozen community-based organizations the city enlisted in the effort have played a key role, helping combat lack of awareness and mistrust that the program really provides free internet without a catch. Anello said that early data on the effort shows brisker sign-ups in neighborhoods where these community groups operate.

Patrick Brosnan of the Brighton Park Neighborhood Council said the nonprofit called 7,000 families from a list the district provided. It connected with about half of them, helping to explain the program, answer questions and steer parents to internet providers to get enrolled. The calls have doubled as an opportunity to connect families with other services, such as rental assistance.

In January, the organization along with other partner community groups is gearing up to begin offering digital literacy classes for parents as part of Chicago Connected.

“You might argue we are already in the (school year’s) second quarter,” Brosnan said. “But these things take time to roll out.”

Anello stressed that the program simply did not have capacity to bring all residents who qualify on board at once or ramp up rapidly. So in the earlier months, it targeted students with the highest needs in a series of enrollment phases or tiers — including those eligible for subsidized lunch who also might have special needs, experience homelessness or live in neighborhoods with a high “hardship index,” a measure created by researchers at the University of Illinois at Chicago.

Now, any family qualifying for free or reduced-price lunch who lacks wired internet will be able to sign up.

“While the district is working toward reopening our doors in January, expanding Internet access to as many families as possible remains a long-term priority, during the pandemic and beyond,” said the district’s CEO, Janice Jackson, in a statement.

Floridalma, the mother of three students in Albany Park, who asked that only her first name be used, said she got a text message and email from the district letting her know her family had qualified for Chicago Connected in October.

That was welcome news.

After school buildings closed in March and learning shifted online, Floridalma signed up for internet at home for the first time. But the monthly bill has increasingly strained her family budget, after a stretch when she was out of work cleaning homes during the spring shutdown and several weeks more recently when she was sidelined by a COVID-19 infection. She says she had never heard about more affordable options for low-income residents such as Comcast’s Internet Essentials program.

“I make sacrifices to pay for the internet so my children can learn,” she said in Spanish. “I only buy the most necessary things.”

‘It’s not just access but quality we need to ensure’

But when she called the number listed on the district’s text message, a Comcast rep told her she could not sign up for Chicago Connected because she already had a contract with the company. That came as a bitter disappointment.

Community-based groups say some families have asked them to troubleshoot a range of barriers to signing up for the program. There’s the issue of pre-existing contracts. Until now, customers of Comcast’s low-cost Internet Essentials program could switch to Chicago Connected, but not those with more expensive plans.

The district says families whose income has changed and they can no longer afford their plans will now be able to sign up for the free program. Internet providers will not forgive debt, but they will not seek to collect it while a household is in the program.

Another obstacle has been the city’s slew of basement apartments and illegal residential conversions. If families are living in basements or buildings that have not been zoned for residential use, they have to rely on hotspots only. And, Anello said, as incomes have sometimes plummeted amid the pandemic’s economic fallout, families have not always been able to sign up based on their current income — an issue he hopes the recent eligibility changes will address.

Community groups such as the Brighton Park Neighborhood Council and the Gads Hill Center also say they are hearing from some families who did benefit from the program that the connection is slow or spotty at times.

“It’s not just access but quality we need to ensure,” said Maricela Garcia of the Gads Hill Center.

‘The signal is weak – it will drop at any time’

Even Williams, the program’s parent ambassador, said her family has had chronic issues with a slow connection that makes her daughter’s live video classes stagger, freeze or shut down completely. They have had to lean on the relative’s hotspot again at times.

Anello said the district’s support line and community-based organizations have received relatively few calls about connection speed and bandwidth issues, given that tens of thousands of households have signed up. (It’s possible that the internet providers are fielding some of those calls directly.) Anyone with an issue should contact the CPS Parent Tech line at 773-417-1060 or the providers, Anello said.

The district said that only 1.5 per cent of 7,930 calls to the tech line since the program’s launch involve internet service performance issues.

“These are isolated issues and to be expected in any program of this scale,” said district spokesman James Gherardi.

In December, the program also started providing hotspots as backup to families with multiple virtual learners who were experiencing bandwidth issues. It’s now surveying residents in the program about their satisfaction with it.

Garcia said there’s also some ongoing mistrust about the program that organizations like hers have tried to counter.

“Families still believe there is a catch, and they’ll start paying fees later,” she said. “People are not really informed, and there’s still suspicion.”

But she said the program has helped many low-income families the center works with, and she believes the change in the eligibility criteria will generate new momentum for enrollment in it. For us, participating in this program is such an important goal,” she said.

‘Kudos to Chicago for jumping ahead…’

One of the challenges these efforts face is a lack of reliable data that would allow cities to gauge the need for these services and target them to families who need them, said Jim Flanagan of the International Society for Technology in Education, who served on Chicago’s school board in the 1990s. Municipalities and private providers remain wary of sharing data they do have with each other because of privacy and other concerns.

Flanagan said what’s needed is more robust federal support for such efforts, sharing of best practices nationwide, and a push to make them accessible to as many families as possible. The second federal stimulus package lawmakers approved late last month includes $7 billion to address the internet access divide.

“Kudos to Chicago for jumping ahead, but now we just have to remove all the barriers,” he said. “It’s like charging folks in need for lunch or school bus access. It’s so wrong.”

Brosnan said that his group is hearing from partner schools in the neighborhood that in some cases, students who received free internet through the program are still not logging in to access classes and assignments. A next step is joining forces to try diagnosing other hurdles that might be getting in the way of school attendance and engagement.

Still, he said, “This program has been a fix, and we’re glad to be a part of it.”