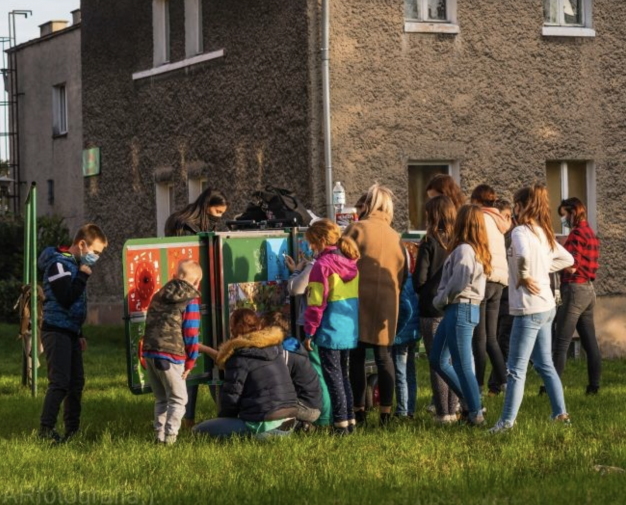 The Polish city of Racibórz has become the latest in the country to acquire a mobile school, an innovative learning tool which is bringing education right into the heart of urban communities.

Originating in Leuven, Belgium, the Mobile School concept has developed into a vital facility globally for youth workers, who can transform streets into learning environments, which in turn empowers communities.

Already a success on the streets of Polish cities such as Warsaw, Krakow, Bytom and Gliwice, the initiative has now been extended to Racibórz, which has a population of 54,000. It comprises a mobile board with more than 260 educational games, with many applications adapted to that particular community, according to Racibórz.com

Through this, children can improve their skills in subjects such as mathematics, Polish language or their knowledge about society; they can learn to respect the rights of others, to get familiar with their own and other children’s emotions and understand empathy.

The Mobile School in Racibórz is run by the Association for the Development of Children, Youth and the Family “Helpful Hand” (originally Pomocna Dłoń). They have applied to the organisation providing the tool – mobileschool.org – and were approved two years ago.

Representatives of both organisations ensured that the educational content is suitable for the mobile school. After this verification, the Mobile School was handed over to the Association’s staff last week who will start using it in the field next spring.

Mobile School is now up and running in some 30 countries worldwide and – more importantly – has made just short of 69,000 registered ‘contacts’ with young people. The city authorities are co-financing the project in Racibórz while the larger MobileSchool.org project is supported by the European Union, under its Erasmus+ education development and funding scheme.

In addition to the games-based learning opportunities readily available, the platform supports youth workers with online resources like games and a virtual learning platform for coaching and evaluation. The mobile school is considered especially effective in bringing learning opportunities to remote locations or disadvantaged communities, where kids tend to quit formal education too early or are excluded from it in general.

During the COVID-19 pandemic when many schools were forced to close and distance learning became the norm, being able to bring schooling to the very homes of these children can make a world of difference.