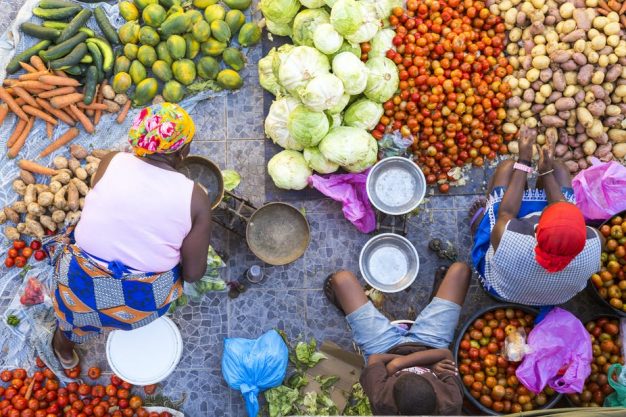 More children in Zimbabwe are working to survive: what’s needed

The ability of Zimbabwean families to take care of children has been compromised by a collapsing economy, compounded by COVID-19. About 4.3 million people in rural communities, including children, are food insecure this year. The World Food Programme indicates that at least 60 per cent of the population of Zimbabwe need food aid.

The Vendors Initiative for Social and Economic Transformation in Zimbabwe has estimated that over 20,000 children have turned to vending as a means of survival since the COVID-19 lockdown.

According to reports, child vendors in the city of Bulawayo are mostly selling fruit and vegetables. And in the capital, Harare, they sell a variety of goods from vegetables to used clothes and shoes.

The phenomenon of child vendors in Zimbabwe has been topical for some time. But the situation appears to be worsening.

There are no statistics about how much income vendors make, due to the informal nature of this business and a lack of centralised coordination of their activities. Nevertheless, it’s clear that poverty is the reason children are on the streets. But in their efforts to help their families, they are exposed to risks such as exploitation, abuse and missing school.

The situation calls for a critical conversation about the capacity of families to protect and care for their children and the role of social protection policies in the country.

A National Action Plan for Orphans and Vulnerable Children has been in place since 2004. The policy guides the provision of care for these children. My prior experience and observations as a social researcher suggest that the plan isn’t working in practice.

There are number of gaps.

The first is that there’s no clear definition of what the term “orphans and vulnerable children” means, especially in the current economic climate and increasing vulnerability of children in the country. There’s a danger that children will fall through the cracks and go unnoticed without any government support.

Secondly, there is a lack of good data. The actual number of children at risk is not known due to a dearth of research on child deprivation and government responses in Zimbabwe.

Thirdly, government interventions aren’t reaching those in need. The government’s National Action Plan for Orphans and Vulnerable Children is meant to be overseen by a multi-sectoral committee to mobilise resources. Under it poor households were to receive grants varying from US$10 (one person household) to US$25 (four person household) per month (paid bimonthly) through a cash transfer. The funds for this come from the Child Protection Fund.

The first phase of the plan was between 2005-2010 and the second phase between 2011-2015. The evaluations of these two phases showed several gaps in service provision and targeting of orphans and vulnerable children in the country.

Even by 2017 only 23,000 beneficiaries in eight districts had received the cash transfers. However, the number of families in need way surpasses the number that received it. According to social policy experts, the unconditional social cash transfer programmes don’t target all poor households. They only target those that in addition to being extremely poor, also suffer from severe social and economic vulnerability. This, however, is open to interpretation.

The current third phase of the plan was supposed to cover household economic security, basic social services and child protection. The fact that there appears to be a growing child vendor problem in the country in 2020 shows the plan is not reaching everyone in need.

The legal working age in Zimbabwe is 16, but children as young as 10 and 12 years old are selling goods on the streets.

Children aren’t being adequately protected from child labour and the risks they face, including exploitation and abuse.

When children spend hours of their day in the streets or at the market, they lose a portion of their childhood that will never be regained. They miss out on education, play opportunities and other childhood activities. This has far-reaching effects on their development.

According to the International Policy Centre for Inclusive Growth, the third phase of the National Action Plan for Orphans and Vulnerable Children seeks the involvement of families and the community in child protection.

But the governnment’s ability to drive the plan is severely compromised because it doesn’t have the capacity in the Ministry of Social Services. This is due to a massive exodus of Zimbabweans from the country as a result of the economic crisis. As a result, the plan is heavily reliant on external assistance and development partners.

So far, the government’s response has been to reunite children found in the streets with their families. The reality is that without alternatives for these families to earn an income and to feed their families, children will go back on the streets.

In addition, it’s proving difficult to change the mindsets of Zimbabweans on the role of children in the society. Culturally, the involvement of children in the family economy is generally regarded as acceptable. Parents feel that it’s a way of training the children to become more responsible adults.

The government can prevent child vending through identifying families that are at risk of losing their livelihood. Social policy programmes need to be expanded to cover more people. This implies increasing the social protection budget to cater for growing numbers of families with children in need.

Policy makers and social service practitioners must consider adopting a bottom-up approach and work collaboratively with the affected and at-risk families. This can be done through participatory approaches such as workshops to hear from the community how best the issue of child labour can be tackled in this economy.