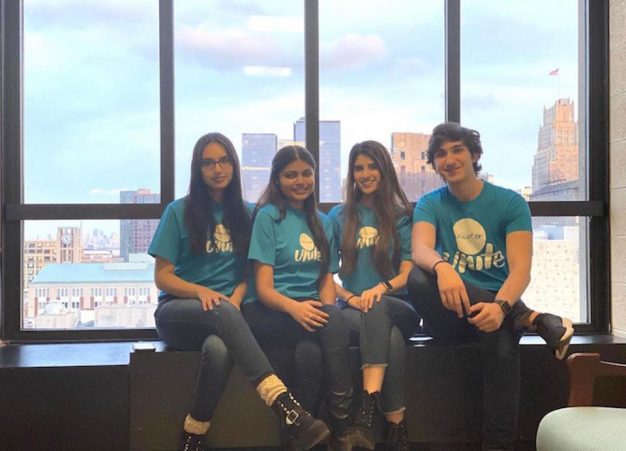 Published on 23-11-2020 at 08:45
Jawad, 22 (far right) and fellow Rutgers University UNICEF Club leaders at a UNICEF UNITE School Club event in Newark, New Jersey on March 4, 2020, just before the club shifted to virtual engagement to prevent the spread of the novel coronavirus. © UNICEF

In recognition of World Children’s Day, we bring you the stories of five young ‘changemakers’ who are working with international children’s charity UNICEF to build a better future for society. Jennifer Sperber of UNICEF USA tells us more.

In 2020, we’ve seen countless examples of young people making a difference. Whether they’re standing up against injustice, calling for climate action or volunteering to help those in need during the pandemic, youth are not just dreaming of a better future for all, they’re actively participating in creating it – they are changing the world,” writes Jennifer Sperber of UNICEF USA.
In honor of World Children’s Day, here are five young changemakers who contribute to UNICEF’s mission by working to shape a better future for children and young people in their communities. Among them are UNICEF USA Club members, youth advisors and volunteers from across the U.S. who are advocating, innovating and ensuring that young voices are heard.

If I’m passionate about something, I don’t think about the time it will take. I just go for it. — Egette, 22

Born in a refugee camp in Tanzania, Egette, 22, has had a special relationship with UNICEF for as long as she can remember. “I saw UNICEF volunteers every day,” she says. “They played with us. They taught me how to count.”

So when she saw the cyan blue logo again, years later, as a teenager living in Virginia, there was no questions about whether or not she would become a UNICEF volunteer. She started focusing her volunteer work with her UNICEF Club on mental health education for young refugees.

This was at a time when I started processing my own experiences and found it really difficult to talk about them,” she recalls. “That’s how I had the idea for a safe space.” She created a program for the young refugees in her community, a place where they can talk about their experiences. “A lot of time teenage refugees don’t feel welcome or don’t know how to talk about what’s going on on the inside. I wanted to change that,” she explained. 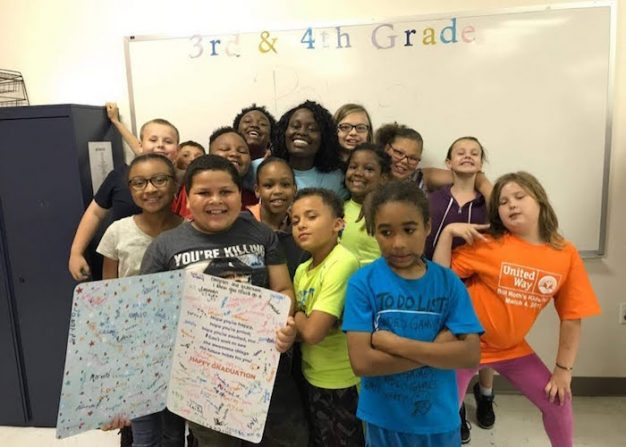 Since then, Egette has become a registered behavior technician and has started another program to help refugee children learn to share their feelings through community-building activities. “Children from East Africa, Syria and Mexico all come together to play and learn to talk about what they went through and how they’re coping.”

Now, as a member of the leadership development team of the UNICEF USA National Council, Egette continues to fuel discussion around mental health and fight the stigma surrounding mental illness for youth around the country. “I know now that I am resilient and I want young people to see themselves as resilient too.”

I sent every member in my UNICEF Club a marigold seed to plant. It represented a peaceful young life lost. — Jawad, 21

Jawad, 21, founded Rutgers University’s UNICEF Club in January 2020. Not the easiest time to start a new group. “Two months later, the pandemic hit the US, students were sent home and the last thing people had on their minds was being part of a club,” he recalls.

But that didn’t stop Jawad. At a time when people were stuck in their homes and on their computers all day, he still encouraged club members to participate in an art contest to raise awareness and donations for the children of Yemen. It was a competition that involved the whole community, crafting and getting away from a computer screen, and it gave people something to do.

He also sent every club member materials for planting a marigold. “This was for everyone to remember why we created this club in the first place, for the innocent lives lost every year.” 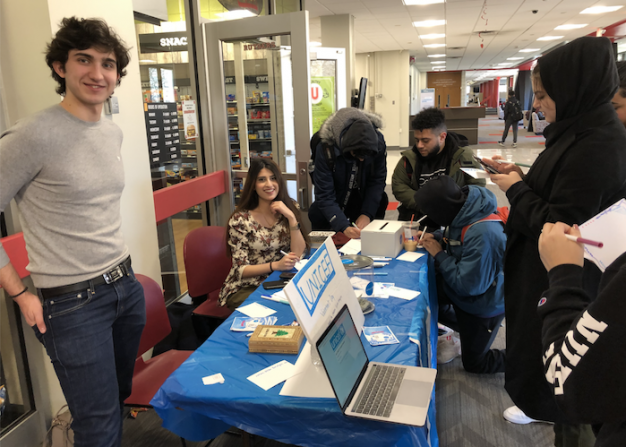 Jawad first heard of UNICEF as a child, growing up in Lebanon, where he saw “millions of Syrian refugees with no assets, no clothes to wear and no food to eat.” He saw how UNICEF provided the refugees with necessities. “That’s how I first learned UNICEF was doing important work,” he says.

With his UNICEF Club, Jawad always focuses on “advocating most interactively.” To help club members understand something that is happening 3,000 miles away, he tries to find creative solutions. For example, last January, he hosted an event to educate his classmates on the Syrian civil war. Instead of a presentation, he hosted a pottery painting session. He showcased glass paintings, copper work and other Syrian craftsmanship to illustrate the beautiful culture lost to war. “I wanted to spread the word in a new way and ignite in them the desire to change something.”

The biggest privilege is being able to help other young people share their voice. — Rimsha, 19

When it comes to volunteering for UNICEF, 19-year-old Rimsha has pretty much done it all. As a UNICEF Club member, youth representative and now CFCI (UNICEF’s Child Friendly Cities Initiative) youth advisor for Houston, Rimsha is most passionate about making sure the voices of youth are not only heard but also taken into consideration in every government decision-making process.

What first drew me to UNICEF was that while most people don’t listen to chldren or don’t take them seriously, UNICEF does,” she says. “As a young person, I’ve been able to help implement projects that make a difference for children in my community.”

As youth advisor for CFCI in Houston, Rimsha works with other UNICEF volunteers, staff members and local government officials to implement a two-year transformative process so that Houston can be recognized by UNICEF USA as one of the first child-friendly cities in the U.S.  “If you do something for the youth, then you need to do it with the youth,” she says. “I love being part of this process.” 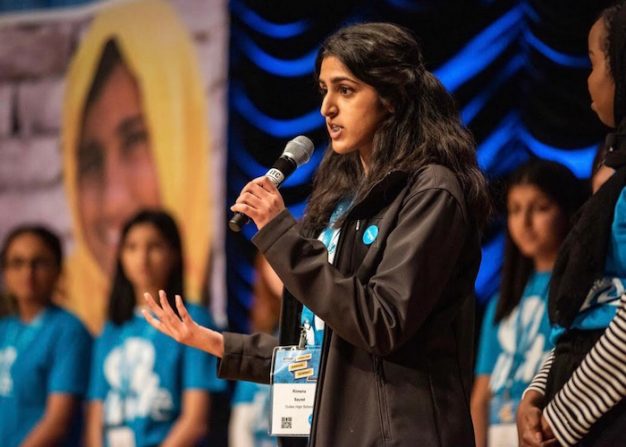 One of the most memorable experiences she’s had as a CFCI youth advisor was traveling to Cologne, Germany for UNICEF’s first CFCI Global Summit in 2019, where she discussed approaches to advancing child rights, and how to go about creating a safe, just, inclusive and child-responsive community.

She was also one of 120,000 children and young people from more than 160 countries who contributed to the creation of the CFCI Child and Youth Manifesto.

“I feel honored to be able to share my voice this way,” says Rimsha. “I know not everyone can, so I always try to think about what other people would want. I think about my sister, I think about her friends. I think about the young people who don’t have a voice.”

Being on the UNICEF National Youth Council is about more than just me. I want club members who are like me to see themselves in a leadership position. — Courtney, 22

Originally from Newtown, Connecticut, 22-year-old Courtney started looking for ways to help in her community after the school shooting at Sandy Hook Elementary School in 2012. “Everyone in town was trying to put their lives back together piece by piece, and I too was trying to heal,” she says.

Courtney’s school UNICEF Club connected her to other youth, and it was a way to help her community. “We hosted events and got people to participate in Trick-or-Treat for UNICEF. It was a small way to bring some joy back.” Soon the club became her passion. She saw it as a way to “help those who are often spoken over,” children and others who experience social inequality. 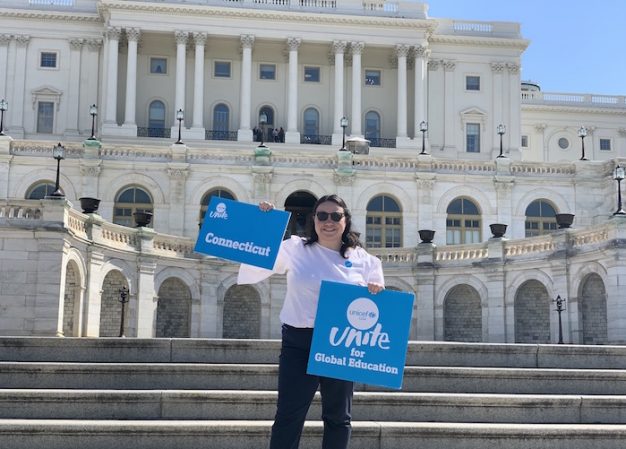 Courtney says she would often tell her fellow club members, “If you see someone who brings a different perspective to the table, recruit them for the club. We need as many perspectives as possible. That’s the only way we can grow.”

Diversity is also her focus on the National Council’s recruitment team, where she works with the LGBTQ+ community, she also wants to demonstrate that people who experience social inequality daily need to make their voices heard loud and clear. “That is the change we need,” she says. “Those are the leaders we need.”

I don’t believe in children not having motivation. Often, they’re just not given a chance to be inspired. I want to change that. — Aryan, 16

Aryan, a 16-year-old UNICEF Club member from San Jose, California, decided one day to start an autism awareness blog after realizing that a lot of his friends didn’t know what ASD was. “My sister is on the autism spectrum, and I wanted to find a way for friends and people in our community to understand what that meant,” he says. “I wanted to break down barriers.”

The blog may be based on his family’s personal experiences, but it has resonated with countless others in his community. Not only is the blog a place where people can learn about autism, it’s also a place that fosters empathy and understanding. “That’s what really grows awareness,” Aryan notes. 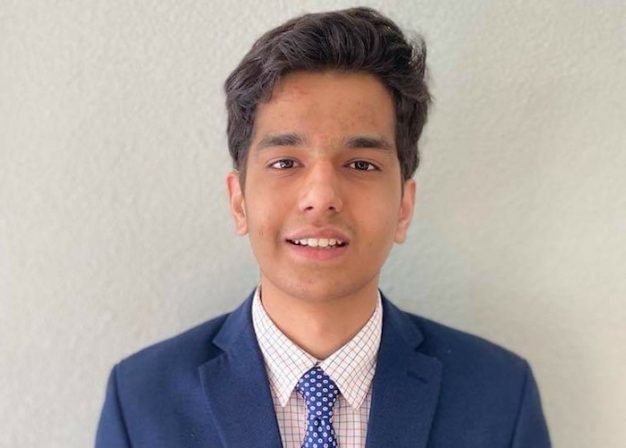 After seeing the impact the blog has had on readers, Aryan has been inspired to further raise awareness and help young people in other ways, including volunteering in a pediatric clinic and teaching children how to code. “I want to reach kids who would otherwise not have the opportunity to learn to code,” he says. “Some of them don’t even know what it is or all that you can do with it.”

Aryan’s goal is to give kids the tools to find what it is they are passionate about. For him, there is no such thing as a lack of motivation. “It’s all about giving children a chance to explore who they are.”

Jennifer Sperber is the UNICEF UNITE Communications and Content Fellow at UNICEF USA.