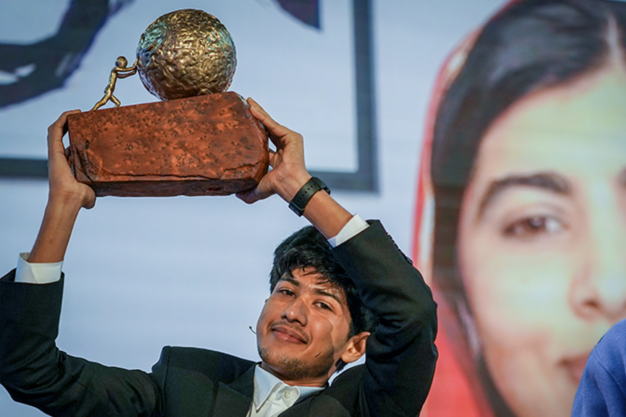 The International Children’s Peace Prize is an initiative of the international children’s rights organization KidsRights, and Sadat, who is 17, was chosen from an impressive 142 applicants from 42 countries.

He was awarded the prestigious prize at a ceremony in the Netherlands, where he was commended both for his work in designing and developing the app, ‘Cyber Teens’, but also establishing a social organisation which brings together key people involved in tackling this global problem.

Launched in 2005, the prize gives Sadat a global platform from which he can spread his message to hundreds of millions of people worldwide – not least the children and young people who may be suffering cyberbullying but don’t know where to turn for help.

Sadat was inspired to develop the app after hearing about a 15-year-old girl who committed suicide after suffering from cyberbullying. He was moved to such an extent that he founded his own organisation and created ‘Cyber Teens’ to give helpless teenagers a place to go for help. The app gives young people information about internet safety and gives them the possibility to report cyberbullying confidentially. Cyber specialists, social workers and the police are brought together via his organisation.

It has already supported more than 300 victims of cyberbullying, including by reporting fake social media accounts and providing support for mental health problems. The app has led to the arrest so far of eight perpetrators of cybercrimes. Sadat has also reached over 45,000 teenagers with internet safety seminars in schools and colleges.

He has created ‘Cyber Clubs’ in every school in his local area, educating young people on digital literacy. His hope is that he can now spread usage of the app beyond his local area, and go on to help victims of cyberbullying across Bangladesh.