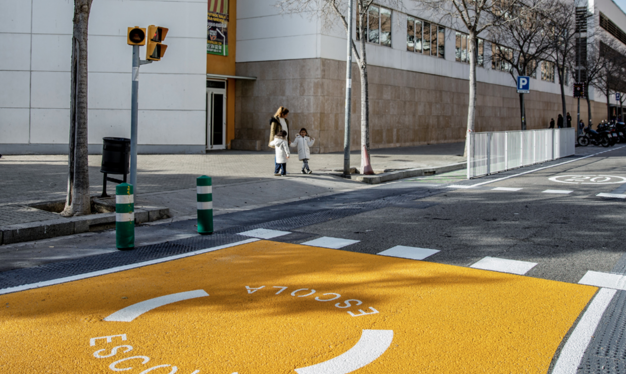 Civic leaders in Barcelona have embarked on an ambitious new project to transform school environments and turn them into safe, healthy and less-polluting spaces.

“Schools are places full of life, with a large volume of people who come to them every day, including students, teachers and parents, says the council. “Therefore, their environments must be safe and healthy, with spaces to stay and play and also where there is less pollution,” it adds. The initial phase, early in 2021, will be on 120 educational centres, with the remaining 80 to follow later in the year, all within the framework of the city’s Neighbourhood Plan.

This latest part of the We’re Protecting Schools project builds on initial work that identified 78 schools the council needed to work with to help provide more space and better accessibility. When all the projects are realised, it will benefit more than 26,000 children and young people from right across the city.

“Reducing traffic and freeing up space for people in educational centers means more space for families to meet and more neighbourhood life – spending more time on the street also encourages walking and consumption in local shops,” says the council.

“At the same time, reducing traffic and keeping it away from children leads to better air quality, reduces the noise children are exposed to and reduces the number of accidents. The surroundings of the schools, where children go every day for many hours, thus become safer and healthier spaces.

Latest data from the Barcelona Public Health Agency suggests that air pollution directly causes a third of new cases of childhood asthma, one of the most prevalent chronic diseases among children. The agency also says that around one in four schools are exposed to levels of nitrogen dioxide (NO2) – typically found in car exhaust emissions  – that are above the legal limit, particularly in the L’Eixample district of the city.

The council meanwhile, inspired by 19th century urban architect Ildefonso Cerdá’s vision to transform the city into what we know as its distinctive ‘criss-cross’ design, has announced a new plan to create more space for urban neighbourhood living. This is provisionally called the ‘supermanzana’ model, from the Spanish word for a street block – manzana.

It follows the success of experimental ‘superblocks’ in the Poblenou and Sant Antoni districts, a model which will now be applied to Cerdá’s iconic creation – the Eixample. A Catalan word, ‘eixample’ means expansion, which is what city planners are looking to achieve. But in this instance it refers more to ‘conceptual expansion’ which, the council hopes, will engender a new understanding for living in the city.

‘A new understanding for living in the city’

One in every three streets in the district will be turned into a green axis, providing green lanes focused not on traffic but on biodiversity. The plan envisions the conversion of 21 streets into such green axes and the creation of 21 new small squares or plazas for community socializing.

When completed, every citizen will live no more than 200 metres from such a green axis or square. It’s expected that this will free up 33.4 hectares of urban space for pedestrians, equal to an area like the Ciutadella park.