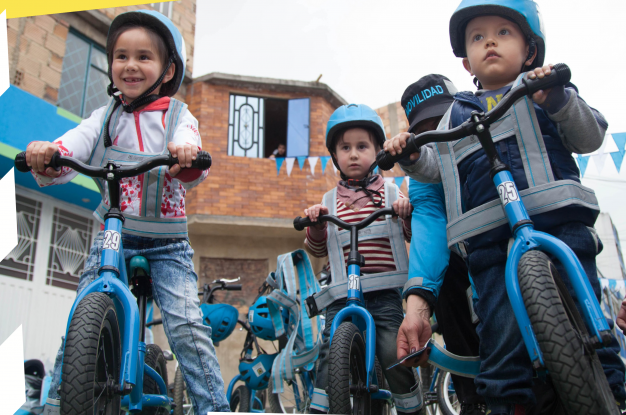 A Dutch-inspired partnership project is championing ‘city cycling’ is show how its importance to children’s health and well-being should be a core part of urban planning.

BYCS, a social enterprise in Amsterdam which promotes cycling, joined forces with the Netherlands-based Bernard van Leer Foundation – highly regarded for its work on children in cities – to examine the positive connection between cycling and early childhood development.

This research has led up to BYCS producing a set of guides for cities which are at different stages of their cycling infrastructure, and which will hopefully, over time, exert some influence on urban policies and practices that better recognise and integrate the needs and interests of toddlers, parents and caregivers.

Interviews were carried out with caregivers and those working in early childhood development, education, mobility, city planning and government. The resulting guides, says BYCS, are being designed for a wide audience, including local government officials, health and cycling champions, industry and education bodies.

“In general, incorporating infants, toddlers, and caregivers into a city’s cycling strategy amplifies the associated benefits because of their more vulnerable nature as well as their significant share of the urban population,” begins the report.

Citing evidence from the World Health Organization, it adds: “Cycling provides a number of physical health benefits from reducing obesity to significantly lowering the risk of cardiovascular disease and cancer that can contribute to lowering health care costs for cities. Studies have shown that children who are obese at age 5 often continue to be obese into adolesence and adulthood.

One issue focused on is air pollution, and the report highlights how switching from driving to cycling can have a major impact on the amount of air pollution in a city, which has both environmental and economic implications, but is also particularly harmful to infants and toddlers. Making cycling the ‘preferred mobility option’ for caregivers and young children, who make up a ‘significant portion’ of the urban population, will, it adds, have ‘positive economical, environmental, and equity benefits for these groups and city residents in general’.

‘Widening gap between rich and poor’

Inequality is also a key issue, with the report saying that many challenges cities face are connected with a widening gap between the rich and the poor. “Prioritising cycling for caregivers and young children, especially those with limited financial means, can contribute to shrinking this gap.” It also makes the point that when cycling is made safe, easy and accessible for youngsters, they are less likely to suffer from stress, will be happier and more productive.

The report also examines issues such as understanding the barriers to cycling for caregivers and how to overcome them, incorporating cycling into other activities, and making it easy and fun. The experiences of several cities are also featured, including Barcelona, Washington, New York City and Marikina, in The Philippines.

In its recommendations, the report says that before developing cycling guides for caregivers, cities should put together a diverse working group of caregivers, as this will help ensure that the needs of the target audience are fully understood and addressed, and in what form the guide would be most accessible to most people.

Click here to access the guide (PDF format) and here for more about the work of BYCS.