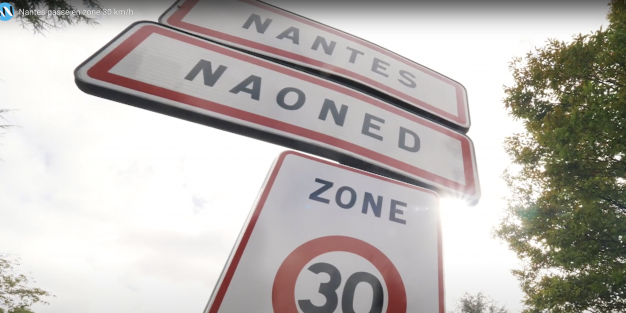 Baby steps they may be but the introduction of new speed restrictions means the French city of Nantes is today just that little bit more child-friendly than it was yesterday.

Despite being the country’s sixth largest city, with a population of some 300,000, Nantes has been by no means alone in having to address congestion and road safety issues brought about by a roads infrastructure geared largely towards vehicles, rather than cyclists and pedestrians.

But as of September 1, literally overnight large swathes of the city centre became 30 kilometre her hour zones, meaning that more than 80 per cent of the city’s ‘urban’ roads are now in what are defined as ‘peaceful areas’.

It’s the latest step in the city’s pedestrian-bicycle plan which was launched in May by Nantes Métropole. The aims are simple: create safer roads for pedestrians and cyclists – many of whom are, of course, children travelling to and from schools – and reduce noise pollution.

Johanna Rolland, the Mayor of Nantes and President of Nantes Métropole, has played a leading role in the initiative, having originally made a commitment to doubling the number of kilometres of streets in the city’s pedestrian and 30kph zones.

“At the end of the lockdown this was an opportunity to rethink modes of travel, to respect the rules of physical distancing and barrier gestures in public space, in particular by promoting the practice of walking and cycling,” she said.

Previous 50kph zones will remain along major public transport routes, such as those used by buses, trams and airport shuttles. Residents of the city also have the opportunity to give their feedback on how the new limits are working via the Dialogue Citoyen (Citizen Dialogue) website.

Click here for more about the work of Nantes Métropole (in French).