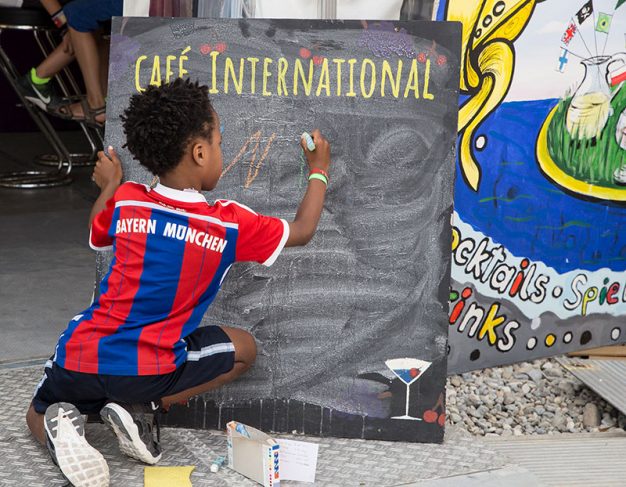 Inside the city run by children

Every two summers since the 1970s, a ‘mini city’ pops up in Munich, Germany. It resembles any other city – except that it is run entirely by children.

This city-within-a-city is a vast urban role-playing game that puts children ages 7 to 15 in control of designing, running, and reimagining a city. Children take jobs and governmental posts, pay taxes and pass laws, produce goods and rely on the services of a local economy.

‘Freedom to rethink what a city can be’

By turns educational and experimental, the play city offers children a chance to better understand and participate in the functions of a city, while also allowing them the freedom to rethink what a city can be. Their city, Mini-Munich, lives for three weeks, from late July to mid-August, and becomes pretty much whatever the kids want. It’s a mix of banal urban bureaucracy and unhindered make-believe, writes Nate Berg for Fast Company.

Organized by the educational institution Kultur & Spielraum, with funding from the city of Munich and support from donors, the play city is free for children to attend. This year’s Mini-Munich was scheduled long in advance of the coronavirus pandemic, but prohibitions against large gatherings threatened to derail what is basically a bunch of kids brought together in the same space. So the organisers adapted. “Children’s concerns were more or less sidelined. They were either seen as vectors for the virus or as a nuisance for parents who couldn’t go to work. So we were really keen to keep it going,” says Joscha Thiele of Kultur & Spielraum. “But then obviously we had to reinvent the play city.”

Typically set in one large warehouse or compound, this year’s play city has been distanced and distributed throughout Munich, operating in about 40 different locations concentrated in four main zones of the city. Cases of COVID-19 peaked in early April in Germany, and of the 217,000 cases nationwide, only about 7,000 have been in Munich. Despite relatively low numbers, the play city organizers remain cautious and have put in place a mask requirement and social distancing rules. Only about 1,000 children can participate on any day – less than half the typical population – and they are clustered in small groups.

Spawned play cities across the world

Since being developed in Munich in the late 1970s, the concept has spawned play cities around the world, from Egypt to China to Japan. Thiele says children often participate in several iterations of the play city over the years, and some line up long before each day’s official 10 a.m. start time to make sure they get in. “We know by now that there are children and families who have to plan their summer holidays around this because the children will not countenance missing one day of this,” he says.

The game follows a loose set of rules that are based on each participant having a job or role, set at the beginning of each day, and followed based on the day’s needs and the city’s changes. A child-run laundry in one part of town washes the robes used by the children working the high court in the town hall. If officials in the mayor’s office need to send a letter, they go to the post office to buy stamps. If workers in the library need a new mailbox, they go to the carpenters to get it built. Each office, business, and department submits funding requests to the city council, and the city council votes on how taxes should be distributed. This year, much of the daily operations and interactions are happening by a phone system originally proposed by the children themselves. Others set up an active stock market, and the organizers hired a group of 17- and 18-year olds—now aged out of being able to play – who developed a web application that maps out job locations and lists the latest city news.

“It’s modeled after a big city, but obviously it’s a game, very consciously so. We have some very serious elements like tax and the tax collector and the city finances,” Thiele says.”And then at the same time we have very playful, silly things.”

‘We have some very serious elements’

By the end of the second week of this year’s play city, children in one section of the city had built a small wooden island that floats in a lake in a public park. A travel agency was soon opened to offer trips to the island. “So you imagine you get on a plane and fly to this island, and you have drinks there and get a stamp on your passport and so forth,” Thiele says. The days typically end in the late afternoon with cultural activities such as talent shows and performances, film screenings, and political debates. “Public weddings are very popular,” Thiele says.

Helping to guide the game, and to offer assistance with things such as carpentry and operation of the radio and TV studios, about 200 adults participate daily. Along with Thiele, a team of about a dozen works full time for about four months ahead of each year’s game, as well as throughout the time between each iteration to secure locations, funding, and material support.

“That doesn’t mean that we know what’s going to happen ever,” he says. “A lot of things are very unpredictable.”

This year, due to distancing restrictions, the city is spread out across Munich, but its main official functions are concentrated in the city’s actual historic town hall—an arrangement that has led to complaints about inequitable service from other parts of Mini-Munich. Some citizens grew tired of having to travel to the center to propose new laws in the town hall, or to file paperwork with the high court. The western section of the city debated splitting away – ”Wexit,” as the children called it. An independent republic was declared, and posters were hung displaying its new name, Republik Seidlvilla, named for the cultural center where their uprising was based. “Luckily for them that’s the spot with the printing workshop, so they have very good propaganda,” Thiele says.

‘The city is spread out across Munich’

After lengthy debates in the chambers of town hall, an agreement was reached to allow each sector of the city to have more control over its own operations and, importantly, to be able to operate their own marriage office. Heading into the final week of this year’s game, Mini-Munich is reunited.

Thiele says this level of self-determination and control over the game is an important part of the play-city concept and helps to engender a kind of children’s public sphere—a sense that the city is a place not just for adults, and that the local economy and urban realm can be reframed to suit the ideas and hopes of young people.

“One of the key aspects of Mini-Munich which I think sometimes people miss is that children do work,” Thiele says. “And that is something that I think children really appreciate. There’s a lot of social recognition in work. So there’s this feeling of ‘I can do stuff, and this is a valuable contribution to this whole.’”

The game has also had an economic impact in Munich, where much of civic life is still disrupted by the pandemic. Due to the need for more locations to safely conduct the game, Thiele says some facilities such as city libraries and a concert hall have reinstated furloughed employees to open and operate the buildings during the day. The quirks of this year’s event haven’t overshadowed the game, though. Thiele says that aside from some complaints about masks, Mini-Munich is humming along, with all the liveliness, diversity, and spontaneity of a real city.

“It always has these different elements, learning about the functions of a city, the institutions, how a city works, but also opening up a space where children can imagine the world, be playful, express their own ideas,” Thiele says. “For three weeks it really is like a miniature society.”