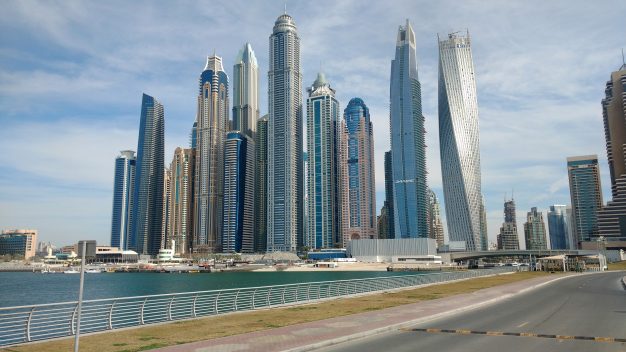 An international teacher’s journey – inspiring a generation, part one: UAE

In 2007 Paula Murphy made the decision to leave a very secure lecturing post at a college in south east England for a short term teaching position at an international school in the Middle East.

She went alone, unsure of what awaited her but knowing that whatever happened she would give the job and the lifestyle her best efforts. Initially thought of as just a ‘brief sojourn’, that’s not how it worked out.

Fast forward 13 years later and she’s in Egypt, teaching Physical Education in an international school in the capital, Cairo. But it was those early experiences in the United Arab Emirates – and in particular a ‘breakthrough moment’ when she introduced Yoga to pupils and instantly widened their experience – that transformed her career path. Paula shares with Child in the City some of her captivating experiences of teaching in a very different type of ‘city’ environment.

“In 2013 I accepted a teaching position with a government of one of the United Arab Emirates, but the story begins in the early 2000s when this government embarked on a total modernisation and revamp of its education system – a modern educational reform programme if you like,” says Paula (below).

“It initially sought teachers from countries where English was the first language, with teachers English and Mathematics recruited. The aim was to give local students both a very strong command of the English language, and a diversity of knowledge and instruction that you can only get from the experiences of a range of teachers. A few years into the programme Science teachers, also teaching in the medium of the English language (EMTs), were added to the recruitment drive. In 2013 – and for the first time – Physical Education (PE) teachers were added to the list of EMTs recruited to teach in state schools.

“The position was as a ‘Physical Health and Education’ teacher but, as with other international teaching positions, you didn’t apply to an individual school, but to the organisation itself which then allocated you a school which could be anywhere across a very large emirate, which is essentially a state-like city region. I was placed in the Baniyas district, very much on the outskirts of the metropolitan and still undergoing residential and retail development.

“This part of the city was home to many families who tended to live a more traditional life and mostly socialised within local family groups, mostly shying away from the more metropolitan cities nearby. Visiting Baniyas before my placement I was reminded of the new town I was brought up in, Skelmersdale in Lancashire, which comprised large roundabouts and long streets of houses, with little history or ‘soul’.

‘I was reminded of the new town where I grew up’

“I was told that the school was brand new, well equipped and already had three other physical education teachers, two in middle school and one in  high school who I would work with. It had a swimming pool and outdoor space that had not really been used thus far.

I made a whole heap of assumptions as to what these girls knew and felt comfortable with.

“So I settled into my new apartment and started to enjoy my new life in a new country. But I also made a whole heap of assumptions as to what these girls knew and felt comfortable with. I am ashamed to say that I didn’t really appreciate the gap in experience and expectation and exactly what I would need to do to engage them in meaningful activities and, just as importantly, to get my very suspicious colleague on board with my ideas.

“There was a clear distinction between PE provision for national students and for expats. All students in both middle and high school had 2 PE lessons/blocks per week, but all ‘national students’ were timetabled to work on a school based ‘military training’ programme involving drill work and other combat skills. On PE days, they came to school wearing faux army uniform combat trousers, top and boots. The rest of the class, essentially the expat students, who were from mostly Islamic countries like Jordan, Tunisia and Egypt, were given PE lessons. On average I would have between eight and 14 girls in my classes which were held in a 2nd floor music room.

‘I didn’t appreciate the gap in experience and education’

“I’ve often reflected on this to try and work out why I wasn’t more aware of the fact that the levels of experience and expectation between them and I would be poles apart. I had been viewing their lives through the prism of my own traditional Western upbringing and what I thought these girls would have experienced in the past.

“I don’t know why but I thought these students would have some experience of what I understood to be organised physical health and education. I made massive assumptions on the issue of biology, never imagining that their body knowledge would not be what you’d expect for girls their age. But this was part of the reason why western teachers were being introduced, to help plug a gap in the historical nature of lack of training for teachers on sensitive, personal issues. After the first week there I realised that I would be on the biggest learning curve of my teaching career.

“It was like being a rabbit in the headlights, and so I spent the first weekend reflecting on what I needed to do. I decided to give them a questionnaire and then tried to spend 10 minutes or so with each student in each class during the next week trying to work out what they knew, what they liked and what they would be prepared to consider. I had limited facilities and activities and despite the great facilities of the school as the smaller group we often couldn’t access anything other than a classroom and a few basketballs and they were very uncomfortable to work outside.

‘Build up their sense of worth and self-esteem’

“So I reflected, I planned, I discussed, I checked the syllabus and I put into action what I hoped would be a strong, useful programme that would help both improve the health and wellbeing of these students but also, crucially, build up their sense of worth and self-esteem in knowing that something had been planned especially for them.

“We started with Yoga. I didn’t really want to as I’m not that great at Yoga myself but I felt that it would be a really good ‘gateway’ activity to ask these girls to begin to use their body in a more physical way and be prepared to experience bodily changes brought about through exercising. They had thus far done PE in their (floor length) school dresses. It was clear that they really had no incentive to change into a PE kit and the room we were using was far away from the changing rooms – they were simply not comfortable with this just yet. So, moving around the storage cupboards, and with the help of stage materials and two shower curtains I fashioned three changing cubicles in the room at the back of our class.

Then came lesson one – post questionnaire – and I can still remember it, seven years on

“Then came lesson one – post questionnaire – and I can still remember it, seven years on. It was a double lesson, 8am to 9.40am. They were still hiding in the changing room at 8.50am, so I patiently sat outside, talking them out one by one. I had to pull the window blinds down and they were only comfortable to come into the class if the door to the corridor was locked. And, one by one, they did come out. I had already changed, and had noticed that the other PE teachers wore what could be loosely called ‘casual’ clothing. You could not call it sports clothes. That had to start with me. I wore a short sleeved, slim fitting athletics top with a pair of gym leggings. They struggled to look at me. What I was wearing was simply outside their sphere of experience.

‘These 11 minutes moved us all forward beyond measure’

“So we sat on the mats and talked about how we were feeling, in our PE clothes. I could tell some were very uncomfortable but they had trusted me and I was honoured. And we chatted about where I bought my clothes from and did I like Barcelona, and so on.

“Then I suggested that we do a short breathing and concentration exercise. So we did. And they stayed with me. So I introduced them to the warrior pose and we stood. The chatting had stopped and they were focused. I thought I was going to cry. After around 11 minutes of activity from an 80 minute class we stopped. We cooled down and they changed.

“A mere 11 minutes of activity from a 100-minute session would normally have had me climbing the walls in frustration. But these were 11 minutes that moved us all forward beyond measure and in ways that we didn’t yet know.

“It set me on the path to two years of meaningful, esteem-building physical activity teaching with these wonderful students which I will never forget and remain eminently grateful for having had this amazing experience.”

To come: Paula will tell us more in part two about her teaching experiences in the United Arab Emirates and Egypt.