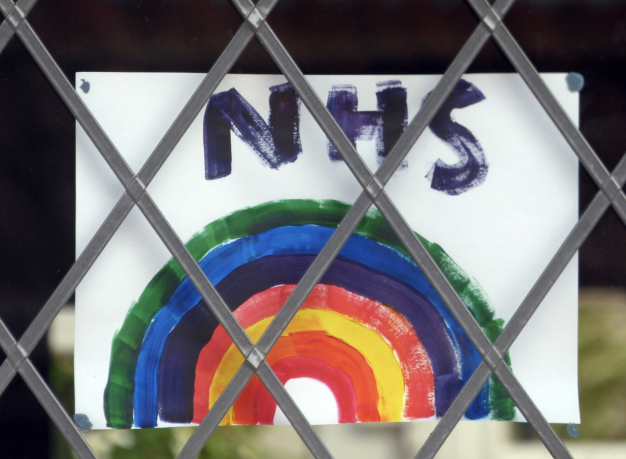 Beyond the rainbows: the missing voices of children and young people in this pandemic

Children and young people’s lives have changed beyond recognition. Not only have schools and universities closed, but fundamental life events and experiences have been missed. They have made these sacrifices without revolt or complaint – and we now owe it to them to ask them to help shape the post-COVID world, says Deborah Ralls, University of Manchester.

Many people currently feel powerless and unable to take control over their own lives. But children and young people are among the worst affected by the socio-economic impacts of COVID-19.

They have had their current lives and their imagined futures changed beyond recognition as a result of the virus. More than 1.5 billion children and young people, or 87 per cent of the world’s student population, have been kept away from school and universities in more than 165 countries. Already disproportionately affected by austerity policies, our youngest citizens are likely to be hit hardest by the global recession caused by the pandemic. More than one in six young people have stopped working since the onset of the COVID-19 pandemic, while those who still have a job have seen their working hours cut by 23 per cent.

‘Urgent need to become more responsive to the young’

There is, therefore, an urgent need for our national and local governments to become more responsive to the interests of the young, to consult and engage them in collaborative discussion, debate and decision making about the key issues that are affecting them, their families and their communities. Indeed, the UN Inter-Agency Network on Youth Development (UN IANYD) is calling for countries to implement the following measures in order to aid sustainable and equitable global recovery from the pandemic:

1) Building safe and effective partnerships with young people during and after the COVID-19 crisis;
2) Recognising young people’s own actions and their potential to advance the fight against the pandemic; and,
3) Understanding the specific impacts the pandemic has and will have on young people, while ensuring that the responses uphold their human rights and are inclusive of young people’s specific needs.

Rather than forcing them to passively observe the pandemic or submit to policy, young people must be given the opportunity to act as citizens. But research on young people’s political participation criticises the lack of any real opportunity for them to have a say on social and political issues, and highlights how they have been marginalised and neglected by policy makers. Surely now is the time for policymakers’ engagement with young people to move beyond the traditional approaches of ‘you said, we did’, where power is exercised, and decision-making controlled, by adults?

‘How do we know what those children were feeling behind the glass?’

Yet where can we find the opinions, hopes and fears of children and young people in current debates about the virus and its impact? What do we know about their lived experiences, and their suggestions for how things in our society might change post pandemic?

Here in the UK, in the first few weeks of lockdown, younger children were actively encouraged to communicate with the outside world – through hand-drawn rainbows and thank yous to key workers that can still be seen, somewhat faded, in the front windows of millions of flats and houses around the country. But how do we know what those children were feeling behind the glass?

It is easy to find the views or advice of professionals who work with children and young people – or we can scroll for hours through photos of a range of home-schooling experiences in parents’ Instagram posts – but these are all experiences created, curated and interpreted by adults. Finding out what children and young people themselves think or feel proves far more difficult. Even their window art is now being curated by adults.

While some great campaigning work is being done by organisations such as Power of Youth and its #Iwill campaign, the absence of children and young people’s contributions to policy discussions on COVID-19 raises wider questions about the UK’s conceptualisations of democracy and citizenship. Some argue that youth non-participation and the political inequality it engenders have significant consequences, including social inequality. Evidence shows that over recent years policy is becoming less responsive to the interests of young people, with policies developed in favour of high-turnout groups such as the over-65s.

‘Young People’s Parliament has been criticised’

The #Iwill campaign illustrates the frustration felt by young people who, at such pivotal points in their lives, are unable to express their views about a pandemic that has a huge impact on their everyday lives – and their futures. It seems ridiculous that we have a political system that denied the opportunity for a teenager to submit a question for the COVID-19 press conference, “because you’re not old enough”, particularly when that question was about young people and lockdown. It is even more absurd given the fact that the young person concerned is an elected Member of the UK Youth Parliament, which was established to ‘provide opportunities for 11-18 year olds to use their elected voice to bring about social change through meaningful representation and campaigning’.

The Young People’s Parliament model has been criticised as being based on a model of participation that is almost entirely didactic – none of the decisions taken have any binding effect on politicians or decision-makers. The debates within these assemblies are, rather, intended to educate young people and participation in them is posited as a means of increasing young people’s self-confidence and political literacy, as opposed to a means of articulating and mobilising around young people’s political interests. In this model, participation is seen as a deferred activity and young people are regarded as future, rather than existing citizens.

‘Inviting young citizens to articulate their views would mark a shift’

But perhaps that conceptualisation is not surprising. The UK is one of only seven OECD countries with neither a Ministry of Youth nor a department or office dedicated to youth issues within a Ministry. The opportunities for young people to participate in public life are shaped by the broader ecosystem of rules, laws, institutions, policies and practices which form the environment in which citizen participation in general, and that of youth in particular, can be encouraged. New international research illustrates the extent to which politicians fail to consider the many ways that children and young people can offer their own expertise and advice at the time of the pandemic. The study indicates that in 30 percent of the 20 countries surveyed, children are involved in creating and suggesting solutions which could help improve their experiences of isolation, education and safeguarding, yet around 70 percent of survey respondents indicated there were no attempts to learn from children’s perspectives.

At the same time, opportunities for young people to find their own way autonomously and together with their peers have been taken away from them for months, without a recognisable prospect of real change. Fundamental life events and experiences have been missed – and  can never be given back: the leavers’ assembly, the school prom, the 18th birthday party, the graduation celebration and many, many more examples. The impact of this, and the fact that young people have made these sacrifices without revolt or public complaint, is rarely acknowledged by policymakers and the media.

The call to recognise the sacrifices made by children and young people has led German paediatricians to urge a change in an approach to COVID-19 policy discourse, in recognition of the assets young people can offer. They suggest that viewing children and young people’s lived experiences through a purely adult lens has resulted in a situation where children and young people are not only unheard and unseen in coronavirus policy discourse but are frequently discussed in deficit terms – as potential carriers of the virus, whose movements need to be restricted to protect others. This is a discourse that has been echoed in recent public discussions in the UK regarding the government’s decision about some children in England returning to school in early June, and following the large youth presence at the Black Lives Matters protests.

‘Such research projects are not enough’

So it is pleasing that several UK research projects are setting out to ask children and young people about their experiences of the pandemic. However, such research needs to caution against the ‘you said, we did’ approach. More than ever, it is vital that researchers seek to do more than provide data that can be analysed by policymakers and professionals in order to develop interventions that are designed and led by adults. Instead, research should seek to employ more democratic methodologies such as those used the Nuffield Foundation, whose research into Growing Up Under COVID-19 positions children and young people as co-researchers, for whom research is ‘with’ rather than ‘about’.

Yet if the global pandemic is to create the possibility of doing things differently, such research projects are not enough. We need initiatives that can support young people’s efforts to safely and effectively act as agents of change beyond the pandemic, to actively participate in shaping responses, and to be meaningfully included in all aspects and phases of the response as existing, active citizens. Barcelona is a good example: it has a track record of promoting children and young people’s participation. But in the last four years the city council has further empowered children and young people. City policy already stated that children and young people needed to be involved in defining and planning participatory initiatives in neighbourhoods, districts and the city as a whole, but it now requires more than that – for them to be co-designers and co-leaders of processes of change in the city.

Policymakers and professionals need to look to cities like Barcelona. The time is ripe for institutions and governments to enhance trust in young people and strengthen social cohesion among groups and between generations. The future should be co-produced by those who will inhabit it for longest. COVID-19 has shown how much we should be proud of them. They deserve more than ‘a voice’.

Dr Deborah Ralls is a Leverhulme Early Career Fellow at the University of Manchester. She is currently working on an international comparative research project: Redefining Education for an Urban Social Solidarity Economy: Becoming Relational.

This article has also been published on the LSE COVID blog. It represents the views of the author and not those of the COVID-19 blog, nor LSE.

Dr Deborah Ralls is a Leverhulme Early Career Fellow at the University of Manchester. She is currently working on an international comparative research project: Redefining Education for an Urban Social Solidarity Economy: Becoming Relational.