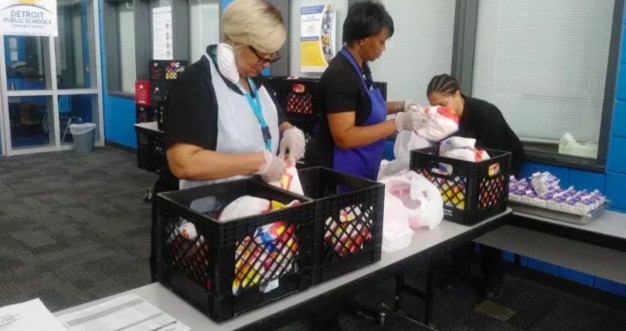 ‘It’s overwhelming every day’:Michigan families struggle to feed their children in the wake of COVID-19

Published on 06-07-2020 at 09:00
Eleanore Catolico/Chalkbeat. Cafeteria workers bagging lunches as part of the Detroit school district’s food distribution efforts after school buildings closed due to the pandemic

Detroit resident Glenda Miggins dreads the painful choices she makes each month in the wake of the global pandemic: Pay her full rent and electricity bill or feed her son Artee, a fourth-grader who relied on school meals before buildings closed.

“It’s overwhelming every day,” said Miggins, whose lack of a vehicle makes it difficult to get to schools or food pantries to pick up free meals. “People don’t know what you have to sacrifice, or who you may have to call or beg” for help.”

The economic collapse from the pandemic has come with a sobering reality for many of the state’s children: Families like the Miggins, who were already experiencing financial strife before the pandemic, are finding their struggles worsened. Preliminary numbers in May show unemployment in the state soared to nearly 21 per cent, from 3.6 per cent in February, writes Eleanore Catolico of Chalkbeat Detroit.

‘Efforts stepped up to make sure children do not go hungry’

As a result, since March 21, the state has received 250,000 applications for public assistance, including food benefits. In a typical month the state receives 10,000. Meanwhile, calls to a state hotline that provides food assistance information were up substantially in March and April, particularly in some urban areas of the state.

Schools, state agencies and food banks have stepped up efforts to make sure children in Michigan do not go hungry. Yet state officials acknowledge their efforts can’t reach everyone. Even parents like Miggins who are receiving benefits are struggling, and children across the state continue to fall through the cracks.

“It’s not a perfect system. Everything feels like a band aid,” said Diane Golzynski, the head of health and nutrition services at the Michigan Department of Education.

More concerns are on the horizon, too, because the end of the school year could mean the loss of meals for some children in the state. The Detroit school district plans to continue distributing meals to students, as will community agencies such as Gleaners Community Food Bank. But that won’t be the case across Michigan, prompting state officials to target help to families in communities where summer school meals aren’t available.

Alex B. Hill, an adjunct professor at Wayne State University who focuses on urban food access issues, said the crisis is an opportunity for policymakers, state officials and advocates to improve the current food system and the service gaps that exist.

“We need to be thinking about the reasons that people don’t have food, not just more ways to get them additional emergency food,” he said. “What policies can we amend to create more opportunity. … Can we build local systems of food that better serve the direct needs of households?”

In the Detroit district, starting July 2 there will be 14 sites where parents can pick up multiple bags of food to carry them over three to four days during the summer, said Machion Jackson, the district’s assistant superintendent of operations. At the end of the current school year, there were 23 sites. No one is turned away, whether they attend a district school or not.

Miggins, who survives on disability income and child support payments from her son’s father, lives about two miles away from the nearest school where meals are being distributed to parents. Pre-COVID, she had a friend who could drive her around when she was in a pinch.

‘..the district was distributing fewer meals’

But that friend was diagnosed with COVID-19, and taking the bus or ride shares are a last-resort option, said Miggins, who has been concerned about exposure to the virus.

Before the pandemic closed school buildings, the district served 45,000 to 60,000 breakfasts, lunches and after-school meals daily. Because of employee health concerns, the district scaled back the number of schools providing meals. At the end of the school year, the district was distributing fewer meals, about 110,000 from schools each week. 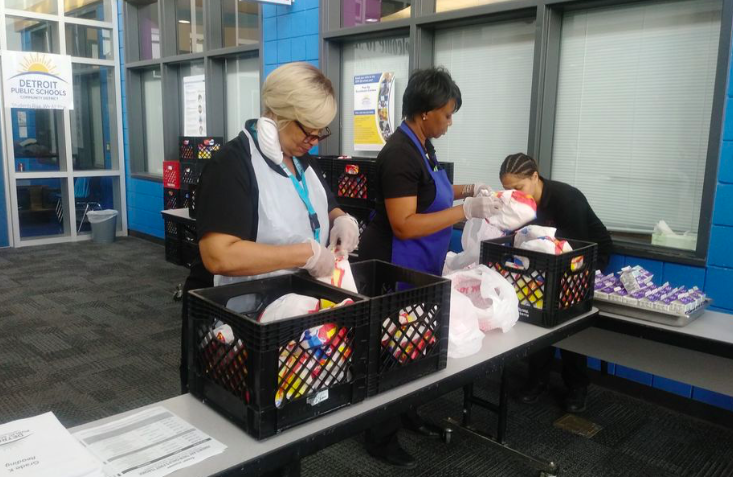 Here’s a map where Detroit students can get meals during the summer.

“We wish that we could feed more families, but the current situation precludes us from doing so,” Jackson said in the spring.

Miggins, whose child support was reduced significantly after her son’s father was laid off from his job in March, has had to become creative with her budgeting.

Miggins wishes that some friends better understood the magnitude of her problems. “I’m sitting here thinking, ‘My cell phone bill is going to get cut off tomorrow,’” she said.

And although parents like Miggins are putting off other bills to provide food, others are making do with less. “Families have to make trade-offs and skip meals to cover other costs,” Hill said. That’s despite widespread efforts — by local schools, state agencies, food banks, and others — to provide assistance.

‘Every child deserves to eat’

Help has come via several new programs, all relying on federal money. Michigan, for instance, was the first state approved for the Pandemic Electronic Benefits Transfer Program, funded by a federal bill that bolsters food assistance programs.

The purpose of the program is to provide families whose children would have received a free or reduced price lunch in school with enough money to cover the cost of those lost meals. In some districts — including Detroit — all students are eligible because their schools are part of a federal program for schools in low-income areas that allows every pupil to receive subsidized meals, regardless of income.

Families received $193.80 (US Dollars) per child for March and April, and another payment of $182.40 for May and June. During a meeting of the state board of education June 9, Golzynski reported that so far, the state has paid out benefits to 945,359 children.

The biggest challenge for state officials has been reaching all the children who need it. They’ve made a particular push to help the most vulnerable children in the state — migrant children, homeless children, and those in foster care. Officials from various state departments have worked with school districts to identify eligible students. It’s been more of a struggle, though, connecting with students who attend private schools, preschools, and homeschooled students because of incomplete and outdated information.

New projections show nearly 24 per cent of Michigan’s 2.2 million children are expected to lack consistent access to food this year, according to Feeding America, a national hunger relief organization that used child poverty and unemployment data to come up with its estimates. That percentage is up from 14.7 per cent in 2018.

“Children were already a very vulnerable group as it relates to food insecurity before the pandemic,” said Winona Bynum, executive director of the Detroit Food Policy Council. “Having consistent healthy meals impacts their current and future health as well as a child’s brain development and ability to learn.” 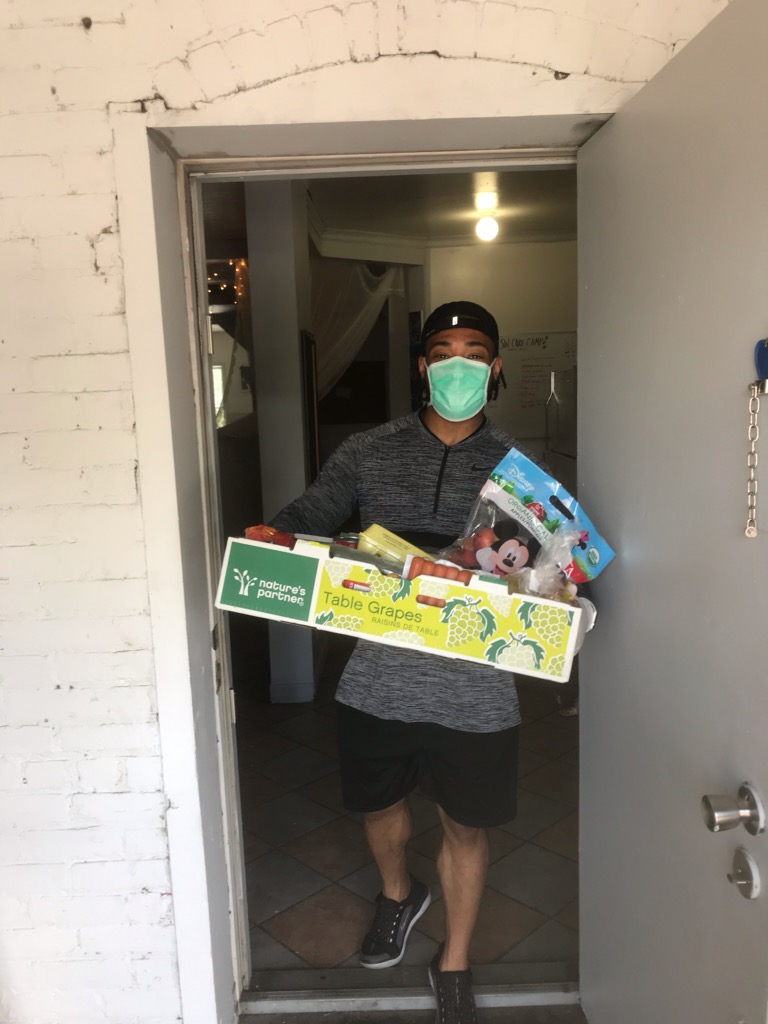 Courtesy of Angela Gallegos. A volunteer ready to deliver food to families as part of Detroit Southwest Community Care, a mutual aid community group that’s been providing food and rental assistance to Michigan residents during the pandemic.

The organization processed assistance requests four days a week out of its location near Clark Park. The program helped nearly 330 families from mid-March through the beginning of June, offering boxes of meals, as well as diapers, rent, and utility assistance. Many of the families are Spanish-speaking, and several of the volunteers who help them are bilingual, making communication easier.

Meanwhile, organizations such as Gleaners — which currently operates 70 emergency distribution sites across Southeast Michigan — have stepped up to provide more help to families, especially those who lack transportation.

“Gleaners recognizes that not everyone has the capability to go to an established site and is doing the work to reach those who are more isolated and lack mobility,” said Rachelle Bonelli, Gleaners’ vice president of programs.

This story was originally published by Chalkbeat Detroit. Chalkbeat is a nonprofit news site covering educational change in public schools.