Which countries are the best at protecting children’s rights?

Published on 01-06-2020 at 09:00
Access to natural, green space makes a huge difference to the lives of children living in high-rise apartments. Inna Ska/Shutterstock

The global NGO KidsRights Index 2020 uses UN data to measure how children’s rights are respected worldwide, and the extent to which countries are committed to improving them.

And its authors say the ongoing coronavirus pandemic has ‘turned back the clock’ on years of progress made on the well-being of young people, and put children’s rights ‘under serious pressure’ across the world.

While the data does not directly include the impact of the pandemic, the report – which has been presented in the context of coronavirus – warns of a ‘disastrous” impact of the crisis on children’.

It is perhaps not surprising that developed economies in the west are revealed by the index as where you will find the five best places to grow up healthy, well-educated and respected. But there are also some results that challenge the accepted ‘norms’, and throw up some surprises.

For the study, KidsRights drew on data from UNESCO, the United Nations Development Programme and the UN Convention on the Rights of the Child. It grouped 20 indicators into five areas: the right to life; the right to health; the right to education; the right to protection; and the enabling environment for child rights.

For 2020, Iceland tops the 182 nations listed, scoring well for its ‘child rights environment’, with legislation that enables child rights, a focus on the best interests of children and respect for their views. For education, it comes joint first with seven other nations,

Switzerland comes second, and top in the protection category, which looks at child labour, adolescent birth rate and birth registration. Finland – another of the joint-top nations for education – is third, while Sweden and Germany make up the top five.

Italy is highlighted for making significant progress in four of the five areas measured. It has climbed from 74th place in 2019 to 15th in 2020. 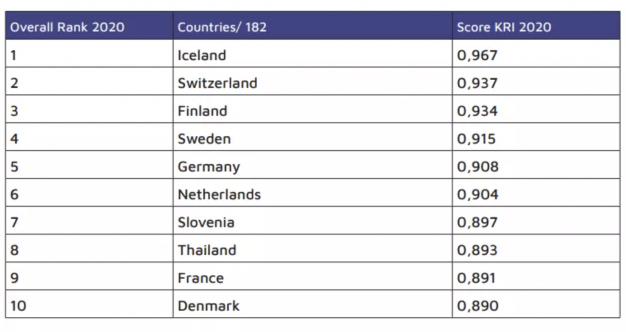 Thailand and Tunisia in top 20

But developed nations don’t exclusively perform better, according to KidsRights. This is because, rather than simply ranking the places where children have the best life, the index scores countries relative to their capacity to implement children’s rights.

it means that a significant number of industrialized nations, including the UK (169th), New Zealand (168th) and Australia (135th), are noticeably low down the list. Conversely, some less developed countries such as Tunisia (17th) and Thailand (8th) perform well.

The the life grouping – which considers criteria such mortality rate and life expectancy at birth – reveals the top three countries as Japan, Italy and Singapore. In health meanwhile, Portugal, Israel and South Korea are top, while the top three for enabling child rights are Thailand, Iceland and Tunisia.

KidsRights also warns that countries are failing to allocate enough money to children’s rights – and that the situation is not improving any time soon, given their commitments on that with governments focusing on healthcare and economies during the pandemic, the situation is unlikely to improve.

Mark Dullaert, founding chairman of KidsRights, said: “This crisis turns back the clock on years of progress made on the wellbeing of children. Therefore, a strong focus for children’s rights is needed more than ever. However, as long as governments are struggling to keep their health care system and the economy running, it’s questionable to what extent they are able to provide this focus. Giving children the cold shoulder can be disastrous in the short, but more so in the long term, for both the current and the future generation.”

The impacts of the crisis are being felt in all areas of children’s lives, from health, development and behaviour, to education, economic security and protection from violence and abuse.

More than 1.5 billion children have been affected by school closures; boys and girls have been left more vulnerable to child labour, child marriage and teenage pregnancy; and disrupted vaccination programmes could lead to a big rise in infant mortality. While children have not, so far, largely been affected by the direct health effects of COVID-19, the pandemic is having a “profound effect” on kids’ well-being, the United Nations says. An extra 42 to 66 million children are at risk of falling into extreme poverty.