On any given Friday before the pandemic, families across the US city of Newark would flock to their local school to fetch fresh vegetables.

“Zucchini, carrots, onions, potatoes, sweet potatoes, broccoli, green beans, Brussels sprouts — the list goes on,” said Dwayne Tatum, the parent liaison at George Washington Carver Elementary, one of dozens of district schools that gave donated produce to families each week. “Any vegetable you can think of has passed through us.”

Then came the coronavirus, which shuttered Newark schools last month and left the free vegetable giveaway that had been available at more than 30 city schools in limbo. The disruption could not have come at a worse time. The pandemic has kept many residents out of work and short on food. Meanwhile, many food pantries are struggling to meet the surging demand, write Patrick Wall and Devna Bose, Chalkbeat Newark.

So school employees who ran the weekly vegetable distribution came up with a solution: They moved their operations to nearby church lots, where residents now can walk up or drive through to pick up the produce. Tatum and other volunteers are even delivering the vegetables to families who can’t leave their homes.

“Whenever we hear about a family that needs food, we make sure they get it,” said Tatum, who loads leftover vegetables into his large pick-up truck and delivers them to families identified by the school social worker.

The volunteer effort to keep the produce giveaway going is just one example of school workers improvising in order to maintain the critical services that schools provide even when buildings are closed and students are stuck at home. Attendance workers are still tracking down missing students, counselors continue to offer social-emotional support, and teachers and still assigning work and giving lessons — though all those efforts now happen remotely, through phone calls, texts, and video chats.

But making sure children and families are fed is paramount in a city where more than 80% of district students qualify for free or reduced-price lunch at school and more than 28,000 children live in households that receive food assistance.

‘Businesses and non-profits have stepped up’

Since school buildings closed on March 16, hundreds of food service workers have continued to show up for work, donning gloves and face masks as they hand out bagged meals to families each day. (Despite those efforts, many families have not picked up the grab-and-go meals, in some cases because they fear leaving their homes or must work during the pick-up hours.)

At the same time, an array of businesses and nonprofits have stepped up to meet Newark families’ growing need for food. Groups including the National Action Network, Audible, World Central Kitchen, more than a dozen local restaurants and grocery stores, and even the city fire department have collectively served more than 73,000 free meals during the pandemic, Mayor Ras Baraka said last week.

One of the groups supplying food to Newark is Table to Table, a New Jersey-based nonprofit that collects excess produce, meat, and bread from supermarkets and food-distribution companies and delivers it to homeless shelters and soup kitchens. Last year, the organization delivered enough donated food for 26 million meals. 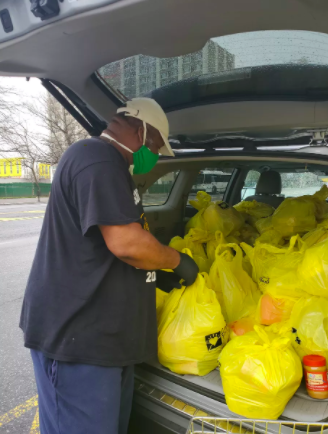 More than half of its shipments go to Newark, where there is an abundance of need — along with groups eager to help, said Julie Kinner, the organization’s director of recipient relations and community affairs.

‘He blessed me so I could help other people’

“It’s incredible to me how often I hear from people in Newark,” she said. “Not from individuals needing food, but from people who can serve it.”

For several years, Table to Table has sent donated food to Newark schools that act as distribution sites. One of the people who hatched the partnership was Joan-Marie Foushee’, a support staffer at Central High School who also leads a South Ward nonprofit. Every Friday for the past four years, Central has given out the fresh produce to community members, students, and staffers. As word got out and other schools asked to join, Foushee’ agreed to share the vegetables on one condition.

“If you want us at your school, you have to adopt three other schools,” she said. Before long, other schools were acting as distribution hubs, giving portions of their Table to Table shipments to other schools so that the giveaway kept growing.

When the pandemic shut down school buildings, Foushee’ and others were determined not to let the vegetable distribution vanish. Several local churches agreed to let the volunteers set up makeshift pantries on their sites. Central moved to Pleasant Grove Baptist Church, Mount Vernon School relocated to Cornerstone Baptist Church, and Carver shifted to Community Church of God.

A small army of volunteers

LeKeshea Brooks-Wertz is a school social worker who helped run the vegetable distribution at John F. Kennedy School, which enrolls students with multiple disabilities. When the coronavirus struck, she wasn’t sure how her work could continue.

“When they said school was closing, I was like, ‘What’s my role? What am I going to do to be helpful?’” she said. She decided to start loading up her truck with grab-and-go meals from schools and delivering them to homebound families. On Fridays, she includes vegetables from Pleasant Grove church.

“God didn’t bless me with this car for myself,” she said. “He blessed me so I could help other people.”

At the Community Church of God, a small army of volunteers gathers each Friday to unload and bag Table to Table’s shipments, which have included pallets of fresh produce, hundreds of gallons of milk from Barlett Dairy, and meal kits from HelloFresh. Community members can pick up food bags themselves, or register online for a home delivery by Douglas and Maggie Freeman, siblings and South Ward community activists who have helped spearhead the vegetable distribution. 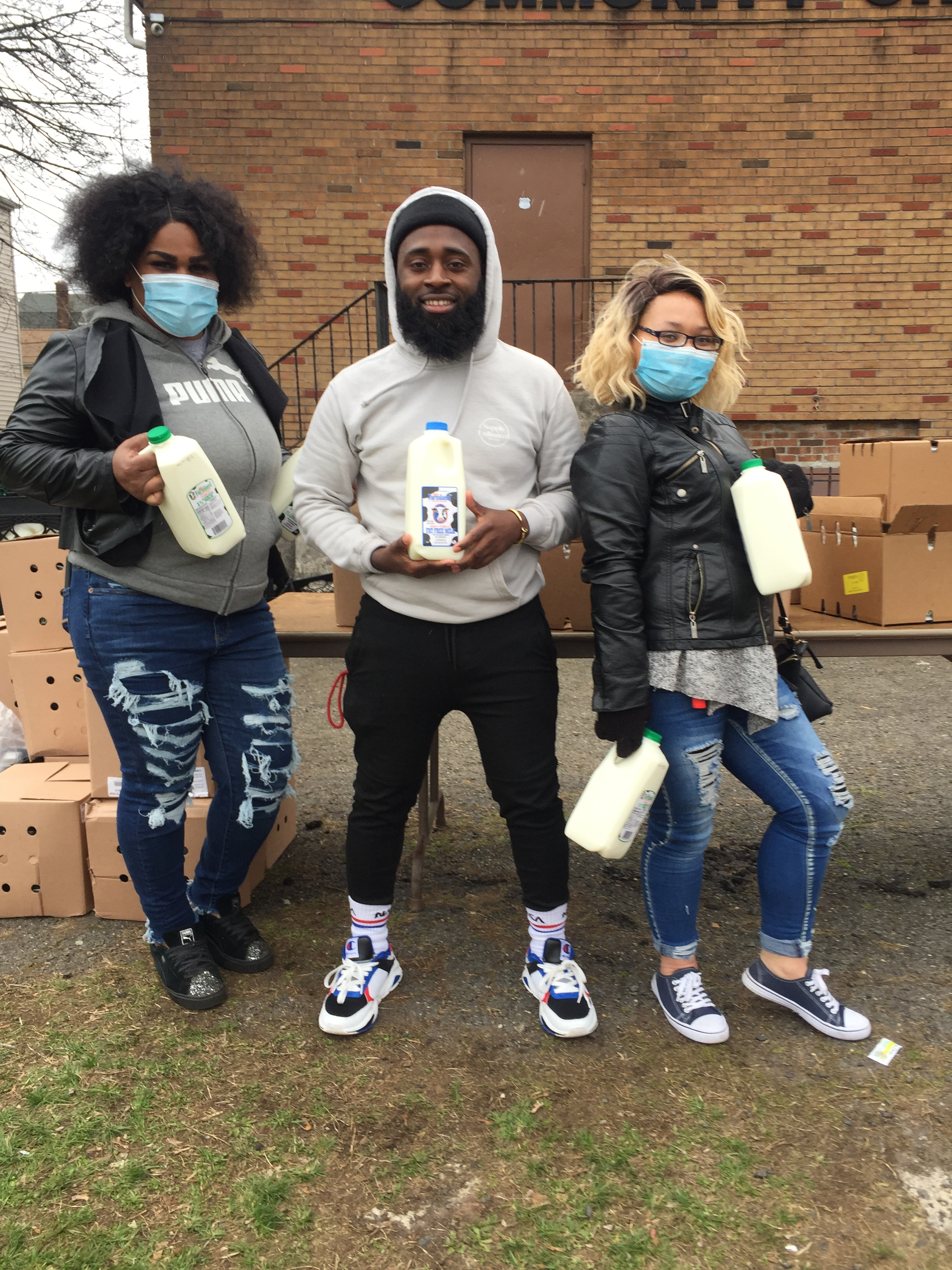 Along with Tatum and the Freemans, one of the site leaders is Singleton, the parent liaison at Hawthorne Avenue School. Before the pandemic, Singleton organized a vegetable giveaway at his school on Fridays — sometimes with help from his mother and grandmother, who live in the neighborhood — and a “Parent Cafe” on Mondays with donated pastries from a Panera Bread in Clifton, about 15 miles from Hawthorne.

Singleton picked up the vegetables and pastries in his Volkswagen Jetta, which he calls “The Hawthorne Car” because he uses it so frequently for work. Now he uses it to deliver vegetables to families who can’t leave their homes, along with Chromebook laptops to students who need them for virtual learning.

“I maybe bit off more than I can chew, but I’ll take care of it,” he said. “Just to see the smiles — that’s what keeps me going.”

‘Just to see the smiles – that’s what keeps me going’

Singleton has recruited a crew of parent volunteers for the Friday food giveaway, which he asked Hawthorne teachers to advertise to families on Google Classroom and in messaging apps. One of the volunteers is Andria Belcher, who has five children, including two who attend Hawthorne.

After losing her job at Newark Liberty International Airport due to the shutdown, Belcher relies on the vegetables to help feed her own family. Yet she also wanted to help her neighbors.

“There’s so many of us that are struggling,” she said. So when Singleton invited her to volunteer at the church, she didn’t hesitate. “Every Friday, I’m there.”

For more information on the scheme, email communitydevelopmentcorp@gmail.com

This story was originally published by Chalkbeat, a nonprofit news organization covering public education. Sign up for their newsletters here: ckbe.at/newsletters