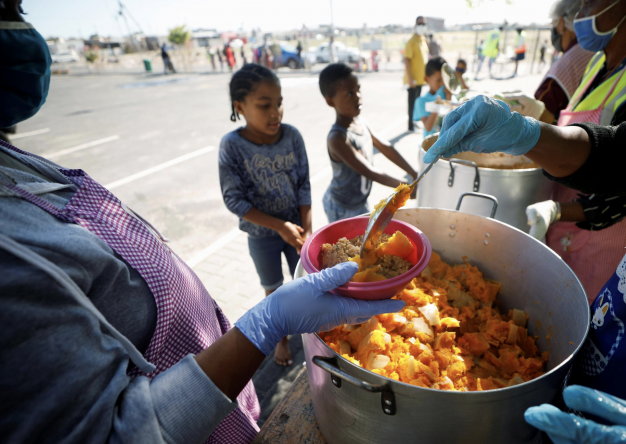 The closure of South Africa’s schools seven weeks ago halted a national feeding programme providing meals to 9 million extremely poor children, filling their stomachs and helping them get through the classroom day to get an education.

The economic hardship has been severe since President Cyril Ramaphosa ordered most citizens to stay indoors and shuttered all but essential businesses in late March. “We have kids here at school who faint (from hunger),” said Shireen Valentyn, 41, a volunteer at Hoofweg primary school in the impoverished Blue Downs community in Cape Town, reports Reuters.

‘We have kids here who faint from hunger’

The school is closed for classes but is providing children and their guardians meals as part of an emergency scheme, unique to South Africa’s Western Cape Province, officials said. “In our kids there is a lot of hunger,” Valentyn said. In the morning they queue in the cold for porridge. Later separate lines of children and adults wait with plastic lunch boxes for a midday meal of cooked butternut and tinned fish breyani.

South Africa reopened some sectors of the economy on May 1 as the government sought to kickstart a stuttering economy.

Schools are expected to partially reopen later this month, with students seen back in class from June 1. But there is no certainty over when the national school nutrition programme will resume, piling pressure on poor families struggling to make ends meet.

“I am also worried about the virus but there is nothing we can do because we can’t stay hungry,” said mother-of-two Thabisa Nete, 33, as she got a hot meal at Vuyani primary school in Cape Town’s Gugulethu township.

The University of Cape Town’s Children’s Institute said before the pandemic, a quarter of South Africa’s under-fives were nutritionally stunted and 6.4 million children under 18 survived on less than $32 a month.

The government had distributed over 250,000 emergency food parcels to poor families by the end of April, the social development minister said, and provided an extra 50 billion rand for social grants. But child rights activists still warn of a “hunger crisis”.

‘Severe implications for ability to survive’

“There is certainly a hunger crisis … and from the perspective of children, I would say that this is a severe implication for their ability to survive,” said Nurina Ally, executive director at Equal Education Law Centre (EELC).

The EELC is one of five groups lobbying Ramaphosa to immediately restart the national feeding scheme or replace it with viable alternatives like food vouchers, as some other countries have done, or substantial increases to child support grants.

The education department did not respond immediately to a request for comment on the school meal programme.