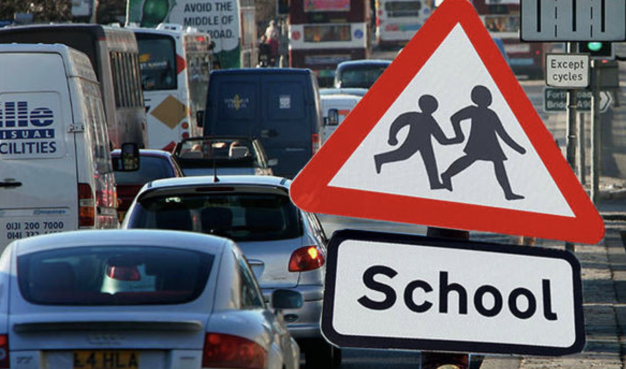 Air quality experts are calling for restrictions on car use during school runs after a report found that children face a threefold increase in air pollution.

Researchers at the University of Surrey’s Global Centre for Clean Air Research (GCARE) partnered with a local school and the community in the town of Guildford to investigate the impact that cars have on air quality in and around schools during the key morning and afternoon times.

They installed air quality sensor kits in five key areas around the school of more than 420 pupils, including drop-off points where cars often remain stationery in queues while the engine continues to run, the playground which is located near a main road, and a classroom. Researchers examined the concentration of fine (PM2.5) and coarse particulate matter, plus carbon dioxide, during morning drop-off and afternoon pick-up times.

They found discovered that dangerous PM2.5 from vehicles lining up to drop off children were the main source of air pollution around the school. PM2.5 levels were also nearly three times higher during morning drop-off periods than the afternoon pick-up or active school periods. This is due to the fact that pick-ups were conducted from off-site parking areas and a large number of pupils took part in after school activities.

PM2.5 levels also rose slightly within the classrooms closest to the road during drop-off and pick-up times. The results suggest that this could be because of the classroom’s dependence on natural ventilation, which brings in unfiltered air.

The study, published in the journal Science of the Total Environment, also found that the playground’s close proximity to the main road, a characteristic similar to many of the country’s schools, resulted in the playground having consistently high PM2.5 levels at key times in the school day.

‘This is work of global significance’

It compliments the findings of a similar report published by UNICEF in 2018, which said that toxic emissions can damage children’s growth and leave them with lasting health problems. Based on work by Queen Mary’s University in London, it found that in nearly three quarters of UK towns and cities, children are breathing unsafe levels of air pollution

GCARE researchers are now calling on schools to provide safe and accessible off-site parking drop-off points to help reduce levels of air pollution. The team has also recommended the use of green hedges as physical barriers to prevent air pollutants reaching children from cars at drop-off points and the main road.

Professor Prashant Kumar, Director of GCARE at the University of Surrey, said: “This is work of global significance, but we are also proud to collaborate with our local community on this work – employing smart sensing technology and a citizen science approach. The findings will be of great concern to parents locally and further afield.

‘We must protect them’

“It goes without saying that our children’s health and wellbeing is of the highest priority in society and that is why we must protect them from the dangers of air pollution, including where the school run can now be seen to be directly impacting the school environment.

“Every school is different. However, many have characteristics that will mean that children are exposed to hotspots of air pollution in school premises. We have found that the use of cars during the school run is increasing the number of dangerous particles our children breath in, even during playtime long after they have been dropped off.”