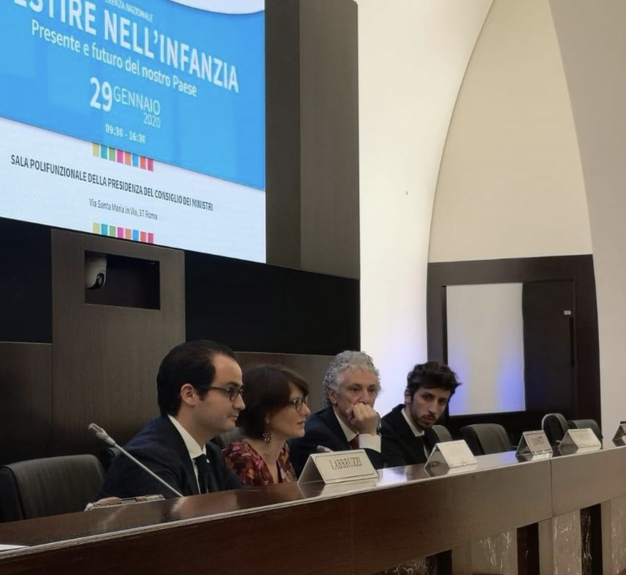 Italy must invest or face ‘irreversible process of child impoverishment’

Italy must act and put an end to child poverty or face ‘an irreversible process of impoverishment’.

That was the stark message from Elena Bonetti, the country’s minister for Equal Opportunities and Family, to the Alliance for Investing Children Italia conference in Rome.

The event shone the spotlight on how the issue of child poverty has taken on an increased relevance in national political debates, addressing a sharp increase in the number of families experiencing poverty and social exclusion across society.

Child poverty is described as a ‘growing emergency’, with 1.2 million children currently experiencing poverty. In the last 10 years child poverty rates have risen from 3.9 per cent to 12.1 per cent. The conference then was an opportunity to underline the extent to which child poverty and social exclusion can impact on future life experiences.

Among the stakeholders taking part in the conference was Eurochild, the influential child advocacy movement. It was represented by Ivano Abruzzi, who is also a spokesperson for the Italian Alliance, along with Elena Bonetti and Brando Benifei, MEP and Rapporteur for the European Social Fund.

‘Children growing up in poverty have fewer chances…’

Describing the situation in Italy, Eurochild says: “Children who grow up in poverty often have fewer opportunities than their peers to access quality education (starting from early childhood education until higher education), and are more likely to experience social exclusion and health problems in the future. They are also less likely to reach their full potential later in life.”

The Italian welfare system has traditionally been based on the family being seen as the principal responsible of the wellbeing of its members, while the role of the state was more to provide generic public services. The fight against poverty has also, historically, been delegated to local authorities, causing serious disparities among regions.

National income support strategies were thus mainly focused on elderly and disabled people. As a result, Italy had to deal with the economic crisis of 2008 without an adequate system of social protection. In 2016 a National Fund Against Poverty (Fondo Nazionale di Contrasto alla Poverta) was finally set up together with a Support of Active Inclusion (Sostegno di Inclusione Attiva): the first national measure focused on families with children under the age of 18 or disabled.

This measure was then followed by the first national measure of universal minimum income, the so-called Inclusion Income (Reddito di Inclusione) that was then replaced by the controversial Citizens’ Income (Reddito di Cittadinanza). On one hand, the Citizens’ Income represents a crucial step forward in terms of the amount of fund allocated (around seven billion euros). On the other hand, it is not envisaged as an instrument to combat poverty, but it is mainly structured as an employment policy instrument. Italy is thus experiencing an extremely delicate political phase that will play a major role in the protection of children’s rights.

Addressing the conference, Elena Bonetti said that Italy must do the following:

MEP Brando Benifei stressed the importance in compelling EU Member States to allocate more funds, while praising the ‘new positive attitude’ of the European Commission towards children’s rights, which mirrors a new political momentum in Europe of which ‘we must take advantage’.

Eurochild highlighted future actions that must be undertaken to deal with child poverty in an efficient and comprehensive way. It also echoed the points included in the Call for Action for an Investing in Children Council Recommendation, by calling on the European Union and its Member States to take responsibility and act now to ensure that no child grows up in poverty in the years to come.

In particular, it underlined:

1. The necessity to obtain a new EU Commitment in the form of a Council Recommendation on Investing in Children: the EU needs to update and upgrade its policy framework to guide Member States in their efforts to protect children’s rights by means of an integrated and holistic approach.

2. The necessity for EU Member States to develop child poverty reduction plans to realise the Investing in Children Council Recommendation. EU Member States should define the universal policy measures they have/aim to put in place; as well as the targeted measures to take to prevent and tackle child poverty at national, regional and local levels. They should ensure that parents have access to quality employment and child/family benefits, that all children have access to free health care, free education, free childcare, decent housing, and adequate nutrition, irrespective of their residence status, and that children should meaningfully participate in the decisions made for their lives. Moreover, these plans should include a list and timeline of actions that are to be supported by national budgets and EU funding instruments, including the Child Guarantee.

3. The necessity for the EU to monitor the implementation of the future Investing in Children Council Recommendation at a national level through the European Semester

4. The necessity for more systematic engagement of civil society at EU and national levels. In particular, Eurochild stressed the pivotal role played by local and civil societies in the fight against poverty and called on the EU to support them to implement projects that will feed into the Investing in Children Council Recommendation.