The new leadership of the European Union has met with a group of child rights organisations as they look to develop and consolidate child protection and participation policies.

Representatives of these NGOs were met in Brussels by the  European Commission, European Parliament, and the EU’s diplomatic arm, the European External Action Service, reports the Devex news service.

Richard Pichler, special representative for external affairs and resources at SOS Children’s Villages International, said that the European Commission’s International Partnerships Commissioner, Jutta Urpilainen, was keen to get input from the group’s input on various topics.

“One is of course child and youth participation; the other one is on tracking and measuring children’s issues being represented … in EU policy, measuring input and outcomes in the funding for children,” she told Devex. “I was surprised how offensively she was meeting us on that, and [she] said, ‘Look, I need your inputs there because it needs to be relevant for the field.’”

The group also met Crisis Management Commissioner Janez Lenarčič, discussing the commission’s commitment — made under Lenarčič’s predecessor — to allocate 10 per cent of the EU’s humanitarian budget to education in emergencies.

There is also a desire for an EU Child Rights Strategy to ‘mainstream’ child rights in EU decision-making, intersecting with the work of Dubravka Šuica, the commission vice president responsible for democracy and demography, who is charged with preparing a ‘comprehensive strategy on the rights of the child’.

Šuica also took to social media to highlight the meeting, writing on Twitter: Important meeting with CEOs of 6 leading organisations working with and for children. As @EU_Commission. lead for protecting children’s rights my goal is to #protect vulnerable children, #foster child-friendly justice and #prevent and #fight violence. #ChildRightsNow 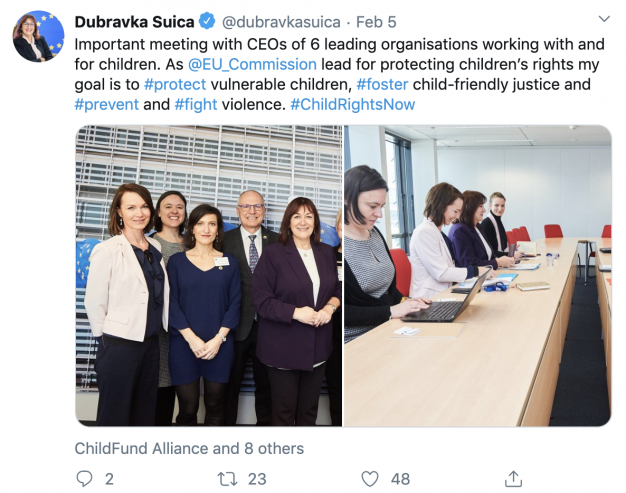 Meg Gardinier, secretary-general of ChildFund Alliance and chief of the rotating Joining Forces CEO Oversight Committee, said the group had risen out of the success that the organisations had lobbying together to secure the U.N. Sustainable Development Goal to end violence against children by 2030.