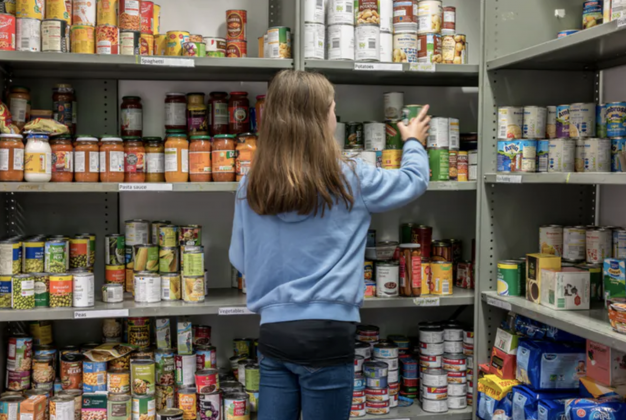 “Wake up, mum. I’m hungry!” This is the opening line to the recently published children’s book, It’s a No-Money Day, by Kate Milner, a powerful exploration of food banks and life below the poverty line.

The UK should not be in a position that such a book needs to be written. But as recent statistics from the Trussell Trust, a charity working to stop UK hunger and poverty, have shown, food poverty is not going away. It’s increasingly generating child victims, whose only salvation comes from donations of emergency food provisions.

By Dave Beck, University of Salford

Food poverty, once just a focus of academic concern, is now knocking on the door of children’s literature. Yet the story told across this 25-page book is becoming an increasingly normal situation in the UK for many families. Indeed, Milner’s book significantly highlights the level of normalisation that has been reached with food poverty in the UK.

Milner’s book is not only an excellent resource to talk to children about poverty, but it’s also a good way to show how such experiences don’t happen in isolation. Recent data has shown that around 30 per cent of children are living in poverty. But what this book also highlights is that treating the use of food banks as normal can be a double-edged sword.

On one side, normalisation allows people to feel accepted, that others are in similar positions. But it also shows the depths the UK has plummeted to and how the social security welfare safety-net has been unravelled by the impact of austerity. A situation that has created victims out of a punitive ideology in the name of “welfare reform”, where the bedroom-tax, sanctions and universal credit are increasingly used as tools for “conditionality”. This is when welfare “rights” become conditional on welfare “responsibilities”, in that people are obligated to behave in a certain way to receive certain benefits.

In 1902, Benjamin Seebohm Rowntree wrote of the poverty experienced by families in York. Rowntree stated that:“The food of these poor people is totally inadequate,” adding that “as a rule … it is the wife and sometimes the children who have to forego a portion of their food –- the importance of maintaining the strength of the wage-earner is recognised, and he obtains his ordinary share”.

Milner’s book highlights how, today, there is a reversal of these findings. The child character explains how: “There’s no more cereal, so I have a piece of toast. Luckily, mum isn’t hungry”. Many parents, especially single parents, take the hit on missing a meal when there isn’t enough food – meaning that food poverty becomes hidden within the family.

This same sentiment was expressed in my research. One woman I spoke to, Donna, told me how commonplace it is:

There are mothers, every single day in every town who are skipping meals to feed their children. When you do not have supplies in your cupboard, and you’ve got no means of buying it, you go without to feed your family … [but] you won’t know that your neighbours’ [also] gone without lunch today, because if she eats, there’s nothing to give her kids for tea. So, [we] hide it.

In my research with food bank users, the experience of food poverty was seen as a form of embarrassment. Many of the people I spoke with in food banks indicated they tried to hide their poverty from younger family members – as this conversation between myself and one food bank interviewee highlights:

Me: “So, he won’t know where this food has come from today?”

‘Foodbanks..are a place of survival for many’

Tony: “No. I mean, he’s only thirteen, I don’t want him to start worrying about where he’s going to get his next meal from, you know. To be fair, he shouldn’t have to worry about that at that age.”

It’s clear that many parents work remarkably hard to protect their children from the worst effects of poverty. Yet, disturbingly, the “survivors” of poverty, caringly addressed in Milner’s book, are those who are fed by the inadequate system of emergency food aid provision such as food banks.

I say food banks are inadequate not to take away from the tremendous work they do – they are now a place of “survival” for many – but simply because they shouldn’t be needed in the first place. And that food banks are now entering the realms of children’s literature feels like a further step too far.