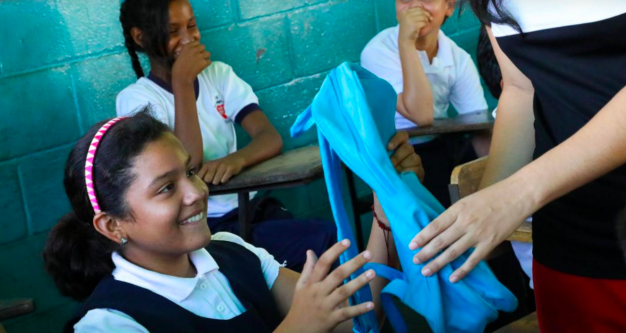 A backpack full of potential – courtesy of UNICEF

UNICEF, the children’s rights arm of the United Nations, is providing backpack school kits to give children in cities Venezuela the tools to focus on their future.

A new school year gives children a chance to reconnect with classmates, make new friends and, of course, to learn. But for Venezuelan children starting classes this month, it’s also an opportunity for something else: to focus on the future.

The deteriorating situation inside Venezuela has so far left the most vulnerable out of school, depriving many of a safe environment in which to learn and socialize. To help reduce dropout rates among children whose families are struggling to make ends meet – and to provide a much-needed sense of normalcy – UNICEF is providing back-to-school kits containing some of the basic materials necessary for children to attend classes.

A safe environment to learn and socialise

Valeria and Manuel, who live in Maracaibo, the second-largest city in Venezuela, have both received the kits. UNICEF spent a day with the siblings to better understand their day-to-day needs, how the kits are helping them – and to hear about their dreams.

But today there’s a welcome surprise for Valeria and her classmates: a UNICEF school kit, which includes notebooks, pencils, and other basic stationary.

Eight-year-old Manuel, meanwhile, has been busy drawing his ideal classroom – which includes trampolines, costumes for dressing up in and computers to replace all the equipment that was stolen from his school. But he’s not done. A few minutes later he adds one more item: an air conditioning unit.

It’s hot outside today – the heat index was close to 45° C (113° F). Valeria and Manuel say that when it gets too hot inside the classroom they sometimes go outside to study. But they still take some to play after school too, despite the heat.

Valeria is keen to show her classmates her first drawings in the new notebook. But while she is happy to share this moment with her friends, she still gets sad when she thinks about some of the friends she’s had to say goodbye to, including those who have left the country completely. “I arrived at school and my best friend wasn’t there,” she says of the first day of class last semester. “She went to Colombia,” she says, adding that one of her teachers left, too.

Fuel shortages make it hard to get a ride to and from school, which means it’s a 30-minute-walk each way. “Our teachers changed our school schedule so we only study from 1 p.m. to 4 p.m.,” Valeria says. “We used to study until 6 p.m., but without electricity the streets would get dark early, so it wasn’t safe to walk home.”

‘Children are tired in class’

As soon as he gets home, Manuel heads straight to the kitchen to get a drink of water. Heat isn’t the only problem at home – water shortages are common, too. They have a large underground tank to store water, with additional tanks placed around the home. They can only get fresh water delivered about once a month, so they have to be careful to avoid running out.

The humidity in Maracaibo means it also stays hot at night. When the power goes out at home it can get so stifling inside that the family has no choice but to take their mattresses outside to sleep on. It’s still uncomfortable, and they don’t sleep well, so the children are tired in class.

Valeria says she wants to fill the pages of her new notebook with “hundreds of paintings” and that she wants to write things down in English. She’s hopeful she can learn a second language – and learn more about the rest of the world.