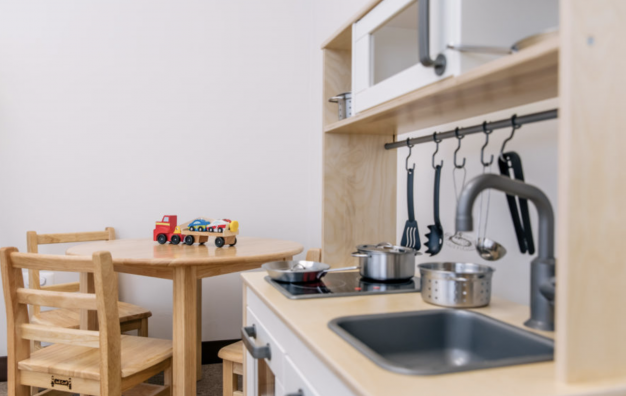 In area beset by violence and deportations, Chicago opens a mental health clinic for infants and toddlers

While the children play — sometimes in view of a two-way mirror that lets therapists observe how they interact with parents or caregivers — the youngsters might act out the stress of detainments and deportations or anguish over family members being shot or abused.

A free-standing mental health clinic for infants and toddlers is believed to be unique in Chicago, and it’s likely a rare find even nationally.

Erikson Institute, a Chicago-based early education policy and teacher training institute, raised money for the clinic here in a Little Village strip mall for a reason. The clinic, which has quietly been in operation this summer but had a grand opening Tuesday, sits in a neighbourhood that boasts one of the highest concentrations of young children in Chicago.

Critical need for such services

The area is also impacted by many issues that cause young children stress: from deportations and crime to high poverty.

“We’ve struggled to find appropriate mental health services for young children in Little Village,” said Katya Nuques, the executive director of Enlace Chicago, a community organisation with deep ties in the area. Her group, she said, recognised the critical need for such services when it started convening women and caregivers for group sessions years ago but then puzzled over finding expertise to help them.

For Erikson and the who’s who of Chicago early learning advocates who toured the clinic Tuesday, the site marks an important milestone: a growing recognition that Chicago can’t expand its early education system without combating some of the chronic issues that afflict families. Researchers have shown the impact of “toxic stress” — a term in early education for what happens during stressful events — on young brains.

Erikson released a report in July that showed 60 percent of Chicago children under 5 live in neighbourhoods that have experienced multiple homicides.

“Toxic stress” can stunt brain development and lead to aggression, anxiety and depression in children. It can also stunt a child’s ability to learn.

A 2017 report from the policy group Zero to Three said barriers to services were “particularly pronounced” among young children, whose behaviours are often dismissed, even though more than 1 in 10 children under 5 undergo a trauma-related disturbance.

Chicago is undergoing a four-year expansion of its early learning system, but the road so far has been bumpy as city leaders split a limited pool of money between community groups and a public school pre-K expansion. But something practically everyone agrees on: The city needs better supports for children and families all-around.

“When there is a trauma in a community, or a home, it affects a child and their caretaker, but a child deals with it differently than an adult,” said Geoffrey Nagle, the CEO of Erikson. “Left unaddressed and unsupported, that trauma is never processed, and it affects a child’s development, it affects educational outcomes and their progression in school. We now have an opportunity to deal with it upfront.”

But, he said, the reality is that, nationwide as well as in Illinois, too few providers specialise in working with the youngest children.

“You can’t sit down and say, ‘tell me about this, or how did this made you feel?’” he said about working with young children, some of whom don’t yet speak. “The way a child under 5 experiences the world is through the relationships in their lives,” which is why the centre’s approach involves adult-only sessions as well as observational sessions with parents and children together.

While research underscores the need, early educators in Illinois, and Chicago, have long struggled with how to make the case for more mental health services for the youngest children.

Beyond the dearth of qualified providers stressed by Nagle, there are other reasons why: from a lack of funding for early education overall, to a lack of understanding about the need, to poor communication between policymakers and providers about identifying problems in the classroom and knowing who to call for help.

Some agencies have reported calling practitioners and hearing they won’t venture into the neighbourhoods with critical masses of families that need their services most.

Play is a bridge

“Parents come to us for many reasons, but before they take that step, they have usually tried everything,” said the clinic’s director, Marcy Safyer, a developmental psychologist who oversees clinical and community services for Erikson.

Lynette De Dios, one of two full-time bilingual clinicians there, said that referrals have so far come from schools, day cares, and doctors. Families can walk in or receive visits at home. All of the staff can speak Spanish and is credentialed in working with youngsters.

“For children, play is a bridge,” she said.

Erikson built and funded the clinic with philanthropic grants but hopes to soon begin underwriting some costs with Medicaid, based off a similar center in operation at its River North headquarters. It serves hundreds of families a year and runs a waitlist.

In area beset by violence and deportations, Chicago opens a mental health clinic for infants and toddlers was originally published by Chalkbeat, a nonprofit news organisation covering public education. Sign up for their newsletters here: ckbe.at/newsletters”