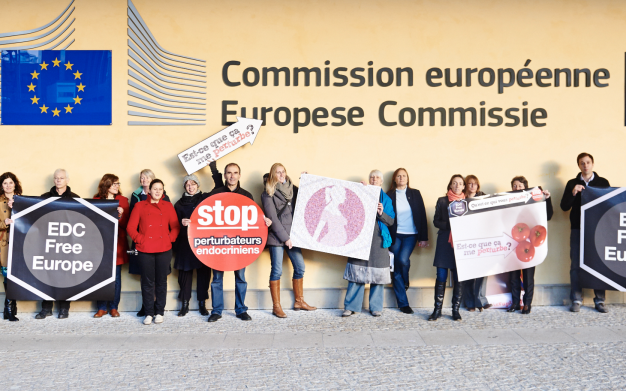 The Child Rights International Network (CRIN) has added its voice to a European campaign against hormone-disrupting chemicals.

CRIN has formally joined the EDC-Free Europe coalition which represents more than 70 environmental, health, women’s and consumer groups across Europe, all sharing the same concern about hormone-disrupting chemicals (EDCs) and their effect on human health and wildlife.

With such toxins being found in everyday items like toys and plastic bottles, CRIN says that children are the ‘worst affected population’ group, and that there is an urgent need to reduce their exposure to them. This move builds on CRIN’s own recent work on the impacts of toxic chemicals on children’s rights and it says that joining the campaign will allow it work alongside expert organisations on this issue and contribute the children’s rights perspective.

“EDCs are chemicals that interfere with the natural hormones in our bodies, they have been linked to cancers, fertility problems, obesity, and many more serious health disorders,” says CRIN. “We are all exposed to EDCs in our daily lives, from bisphenols used in certain plastic bottles, phthalates in toys and flame retardants used in sofas, to the pesticides which end up in our food and the antimicrobial biocides found in cleaning products.

“While all humans are vulnerable to the effects of exposure to toxics, children are the worst affected population group because of their smaller bodies, rapid growth and particular behavioural habits. The time during development in the womb and during early childhood has been found to be a particularly sensitive window of exposure and has raised serious concerns among health professionals.

Governments ‘have been slow’

“But despite growing evidence that exposure to EDCs is contributing to a range of health problems, most governments have been slow in regulating and eliminating this exposure. The exception so far have been Denmark, Belgium, France and Sweden, which have put together action plans.

“From a human rights perspective, childhood exposure to toxics affects a wide range of children’s rights, from their right to health and a healthy environment, to the right to education and play, and, in cases of death, to the right to life and survival,” it adds.

To learn more about the EDC-Free Europe campaign, read the coalition’s Eight Demands for a European EDC strategy. To support the campaign as an individual click here; or to join as an organisation click here.