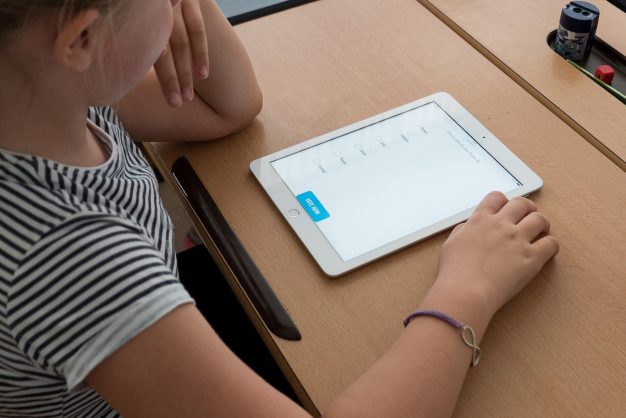 In the old days it was the pupil who gave the teacher an apple – but a new IT project in Glasgow is turning this on its head.

The ‘apples’ in question are 50,000 free iPads that are being given to schoolchildren as part of a digital scheme aimed at helping close the ‘attainment gap’.

It’s part of a multi-million pound IT contract that will eventually see every primary and secondary school pupil and their teacher have access to the latest classroom equipment.

Glasgow City Council is able to provide the free tablets thanks to an education project in Europe involving tech giant Apple and IT provider CGI. The plan is that by 2021 every classroom in Scotland’s biggest city will be transformed by cutting-edge technical hardware and education apps. Eight schools are already seeing the positive effects, with the first pupils having received their tablets earlier this year.

A total of 47,100 pupil iPads are being provided, along with 4,900 devices for teachers. The idea is that this will help free up teachers and boost their control of the learning process, while also ensuring that IT learning in the classroom becomes more inclusive.  The project also includes the roll-out of faster broadband and WiFi in every classroom.

Councillor Chris Cunningham, City Convenor for Education, Skills and Early Years, said: “This is a really exciting time for our schools and an amazing opportunity to digitally enhance the learning and teaching opportunities in our classrooms. We’ve had really positive feedback from the teachers who already have their devices, with some brilliant examples.”

Among the first to benefit from this scheme have been S2/3 pupils (12-14 years) at St Thomas Aquinas Secondary School, who made this video:

‘We want our children and young people to be equipped with the skills that will make them shine as digital citizens both now and later in their working lives. We are aware that 90 per cent of jobs in Scotland involve digital work and so our pupils will be well-equipped for the workplace.

“I know that this project will result in raising attainment and achievement in every one of our schools and nurseries.

Justene Ewing, Vice-President Consulting Services at CGI, added: “It’s a brave new world for pupils, teachers and parents and one that CGI hopes will help make schools in Glasgow an even greater place to learn.”