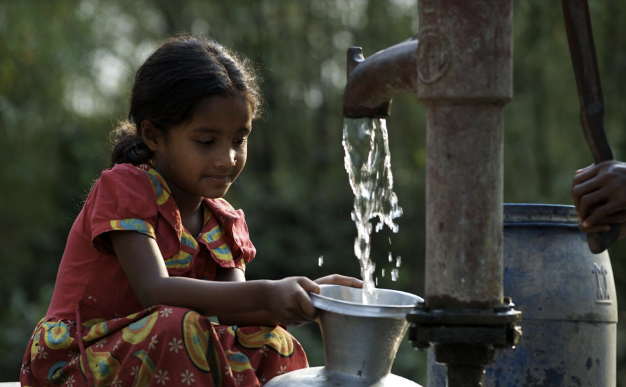 With access to clean water still a huge problem in deprived neighbourhoods globally, more than 1,000 children were involved in an initiative which took place in two city areas over a 14-month period, says a report published in The Lancet Global Health journal.

In what was described as a ‘double blind’ study, 100 water points shared by around 920 households around the capital Dhaka were randomly assigned to have their drinking water automatically chlorinated at the point of collection by either a solid tablet chlorine ‘doser’ or an identical tablet providing vitamin C.

All children aged under five years living in households using shared water points were measured every two to three months. Parents and guardians  then gave updates on their children’s levels of diarrhoea, and rates were found to have reduced by around 23 per cent over the 14 months.

Most previous research has focused on household-level water treatment interventions that require people to calculate the correct dosage and add their own chlorine daily, however these have had low uptake and failed to reduce diarrhoea, partly because they deliver a chlorine dose that makes chlorinated water taste and smell unpleasant.

Although one of the first field trials of this new technology, the report’s authors say that chlorinating water at the point-of-collection could be an effective, scalable strategy in low-income urban settings to reduce diarrhoea-based diseases. More research will be needed to determine where this technology should be implemented to maximise health benefits, as the intervention was more effective in Dhaka than in nearby Tongi.

Clean water is still a major problem in poor urban communities in low-income countries, where contamination by bacteria can lead to high rates of diarrhoeal diseases such as cholera and typhoid, harming children’s health and growth. Worldwide, an estimated one billion people who have access to piped water are drinking water that does not meet international safety standards.

“Our results suggest that this decentralised approach to water treatment could be a transformative strategy for reducing gastrointestinal disease burden in low-income urban communities,” it adds.