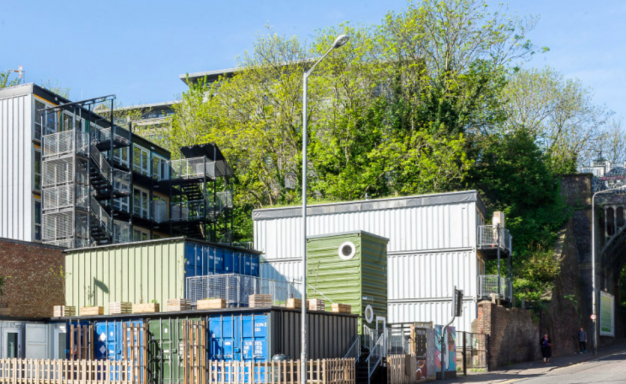 Thousands of children in English cities are effectively homeless, with many even living with their families in converted shipping containers and office blocks, says a damning new report.

Anne Longfield, Children’s Commissioner for England, delivers a stark picture of the grim living conditions facing children growing up in homeless families across the country. Bleak houses: Tackling the crisis of family homelessness in England says while some 124,000 children live in temporary accommodation, there are tens of thousands more who are ‘sofa surfing’, often living with their families in a single room.

London and Bristol are among the cities where shipping containers are reportedly being used as shelter for families, along with at least 13 office blocks which have been converted into over 1,000 tiny apartments. Often these are barely big enough for a single person, let alone a family.

Research carried out for the Children’s Commissioner for England estimates that in 2016/17 there were 92,000 children living in these sofa-surfing families. Anna Longfield also warns that official figures fail to capture a small but highly vulnerable group of homeless children who have been placed in temporary accommodation by children’s services rather than by council housing departments.

This includes families who have been deemed to have made themselves ‘intentionally homeless’, and those with no right to public funds as a result of their immigration status. No public data is available on how many families are being housed in this way.

“Something has gone very wrong with our housing system when children are growing up in B&Bs, shipping containers and old office blocks,” says the commissioner. “Children have told us of the disruptive and at times frightening impact this can have on their lives. It is a scandal that a country as prosperous as ours is leaving tens of thousands of families in temporary accommodation for long periods of time, or to sofa surf.”

The report says that although these shipping container homes can get very hot in summer and very cold in winter, and are therefore totally unsuitable as a housing solution, they are still ‘an attractive option’ to councils, as the set-up costs are cheaper than B&Bs.

“It is essential that the Government invests properly in a major house-building programme and that it sets itself a formal target to reduce the number of children in temporary accommodation,” adds Longfield.

The report also shows how 23,000 families being housed in temporary accommodation in 2018 were living away from their home council area. Children and families describe in the report how moving away from an area can have a deeply disruptive impact on family life. For children, moving area might mean a new school, no longer being able to see their friends or go to the places they are used to. Travel costs might also increase as children have to travel further if they stay at the same school.

The risks associated with poor temporary accommodation can also reduce some of the most basic aspects of childhood such as a child’s opportunity to play. A number of children and parents spoke about the cramped, overcrowded conditions (particularly in B&Bs where families often share one room), which leave little room for furniture and possessions, let alone space in which children could play. The school holidays can be challenging as families lack space inside, are reluctant to let their children play outside and may be miles away from friends, parks or leisure facilities. Even if there are activities close by for the children to attend, the prices can be prohibitive.

Some councils are acknowledged for their work to reduce the use of B&B accommodation by finding other sources of accommodation. Southwark Council in London, for example, has emphasised to staff the importance of cultural change, so they understand that booking a family into a B&B is always the last resort.

Responding directly to the report, the Local Government Association (LGA) said that homelessness services were facing a £159 million funding gap next year (2020/21), and that central government needed to use the next spending phase to give councils the tools they need help families in need.

Martin Tett, the LGA’s spokesman for housing, says: “Councils desperately want to find every family a good quality, secure home, and prevent homelessness from happening in the first place. However, the severe lack of social rented homes available in which to house families means councils have no choice but to place households into temporary accommodation, including – in emergencies – bed and breakfasts.”