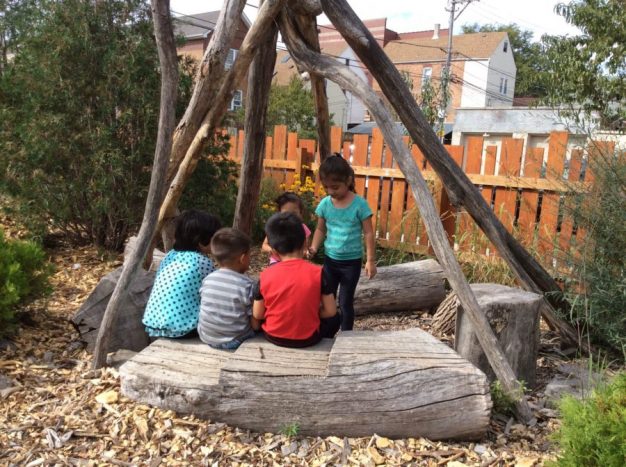 An alternative to the traditional playground in Chicago

Jessica Fong experienced her lightbulb moment one day when she was taking her Spry Elementary School preschool students to play at a nature park near the Little Village school. The park, which is called Jardincito, had once been an uninspiring parking lot, but the community had transformed it into a natural play area filled with big rocks, trees, and prairie grass. To put it simply, the kids loved it.

“A slide—you can only slide on it,” said the Humboldt Park native, who this fall will move from Spry to the Velma Thomas Early Learning Center in McKinley Park. “But a stump can be a stump, a cookie, a dog’s house, a million things that kids develop into their own play.”

Fong, whose first teaching assignment was a mixed-age classroom in Guatemala in 2007, began talking to parents and other teachers about the value of “nature play,” but realized numbers would help her case. The trouble is, not many people had studied how children react to natural environments versus more traditional playgrounds. “I thought, if I can get numbers, I can make my case be more powerful. That ended up being true.”

She applied and won a grant through the Chicago Foundation for Education, which offers teachers stipends to conduct research-based education projects. She talked to Chalkbeat Chicago about her yearlong research project, what she has learned about nature play, and the next question she hopes to answer.

Was there a moment when you decided to become a teacher?

I worked for a little over a year at the Chicago Children’s Museum in 2005. My position there was facilitating and creating programs for the Pritzker Playspace for children 0 to 5 years old. I loved working in a such a creative and collaborative environment, but it was tough to work with the children for just a short time. Since it was a museum, they would move on to something else, and I would never see them again!

How do you get to know your students?

In early childhood education, we know that an integral part of our classroom is the families. You often hear in early childhood that the parents are the children’s first teachers, and I really believe that. I get to know my students by getting to know the whole family. In the beginning of the year I spend time with each family talking to them and learning about the children. This past school year, I asked each family what hopes and dreams they had for their child and created a display panel right in the entrance of my classroom so that the children and families would see it on a daily basis.

Tell us about a favorite lesson you teach. Where did the idea come from?

In my classroom there are not so much “lessons” as there are experiences. I am an inquiry- based, emergent curriculum educator, which means that I follow the interests of the students. For example, during a study on clothes, the students really showed an interest in washing clothes. They asked a lot of questions about washing machines, especially while we were reading the book “Knuffle Bunny,” in which a little girl goes to the laundromat with her dad.

Based on this interest, I planned a visit to a local laundromat where the children were able to see, hear, touch and smell how clothes are washed. After that visit, the children expressed interest in making a laundromat inside the classroom so I purchased the largest moving boxes I could find and supported the children in building a “washer” and “dryer” that they could use in our pretend play area.

My favorite lessons are the lessons that come from the children themselves because they are motivated to learn when it comes from their own curiosity.

Tell us about your research into nature-based play. What have you learned?

I started this research based on my observations last year. Once a week, I would take my students to a nature playground (Jardincito Nature Playground) two blocks away from Spry Elementary in Little Village, where I taught. It seemed like the children were more collaborative and used much more pretend play than at the traditional playground.

This year, I really wanted to know if those observations were real, or, rather, had merit, so I applied for a fellowship with the Chicago Foundation for Education. With the support of fellow teachers, I developed a research plan and implemented it. The bulk of the research was videos of the children playing in the classroom, traditional playground, and the nature playground. I then watched all the videos and coded them to see patterns.

Through this process, I found that the children engaged in cooperative and pretend-play language 44 percent of the time in the nature playground versus 15 percent cooperative and 30 percent pretend play in the classroom and 8 percent cooperative and 15 percent pretend play in the traditional playground. On the other end of the spectrum of language, I found that in the traditional playground, 50 percent of the language was minimal — meaning that children in the videos were not talking or just screaming and yelling — and 27 percent was conflict language, meaning the children were arguing or fighting. In the nature playground, it was a lot less: 8 percent minimal language and 15 percent conflict language.

What this tells us is that the children are engaging in much more rich and complex language in the nature playground versus the traditional playground and the classroom. When children are engaged in pretend play they have to use complex language and thought processes as they create play scenarios. I liken it to the improv game “Yes, and…” because the children really have to think deeply and critically. It’s really exciting to watch and hear.

Can you give us an example?

Here is a transcribed excerpt from one of the videos I took:

Stephanie: I’ve got you, my baby. (Helps Arianna get up the log) Go my baby.

Arianna: I’m too small. Mommy, how could I sleep?

Stephanie: Con mami (with mommy) up here, down there. Grab on here (holds out branch), grab on here.

Arianna: No I’m…Teacher Fong, I’m scared. I can’t get down.

This use of pretend play and cooperative language is integral to young children’s learning, since oral language development is a crucial precursor to written language development. Children who do well academically have been found to have rich oral language skills. Research has also found that children with better verbal ability show better general cognitive abilities and school performance. This is a crucial finding.

Jessica Fong and a student

What is one question your research has yet to answer?

There are so many! I want to know why there is greater cooperative language and pretend-play language in the nature playground then in the classroom and the traditional playground. What is it about the nature playground that creates these language opportunities? I also want to know what languages my students were choosing to use — English or Spanish — and why? Is there more Spanish used in one setting than another and is there more English used in one setting or another? I also want to know if there are changes that can be made to the traditional playground and the classroom that can cause more of that rich cooperative and pretend-play language to be used.

What object would you be helpless without during the school day?

In a classroom with so much energy and excitement, I would be at a loss without my amazing teaching assistant.

What’s something happening in the community that affects what goes on inside your class?

Unfortunately, the violence outside of the school really affects what goes on inside of my classroom. I have students tell me on a daily basis about things that happen in their community that they witness firsthand. Shootings and gang activity are part of their daily lives. Many of my students also have family members in jail and they see the effects of that on their home lives.

What part of your job is most difficult?

The most difficult part of my job is the lack of resources. I spend over $2,000 per year on classroom supplies such as hand soap and paper. In addition, as teachers we have so little time, if any, to work together and collaborate. I mentioned that I would be helpless without my teaching assistant and yet she and I do not have any shared planning time during the week to talk about what is happening in the classroom. This means that I am telling her what we will be doing with the kids right as we are doing it. I would liken this to two doctors talking about their surgical plan when the scalpel is in their hands. It’s crazy.

What was your biggest misconception that you initially brought to teaching?

The best advice I got wasn’t directly related to teaching but rather to self-care, which really plays a big role in being a great teacher. I volunteered at a women’s shelter and one of the women I worked with asked me to walk to the local music store with her. While we were walking she said that she saves the little money she has and once in a while she buys herself some music. She said that to take care of her family, she needed to take care of herself first. For a very long time, I didn’t quite get it — but now, as a mother, a teacher, and a student, I know she was so right.

Feature image: Courtesy of Jessica Fong. Fong says a nature playground is a space where play happens with natural and loose materials like rocks, pebbles, trees, stumps, boulders and plants. 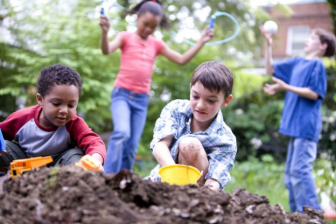