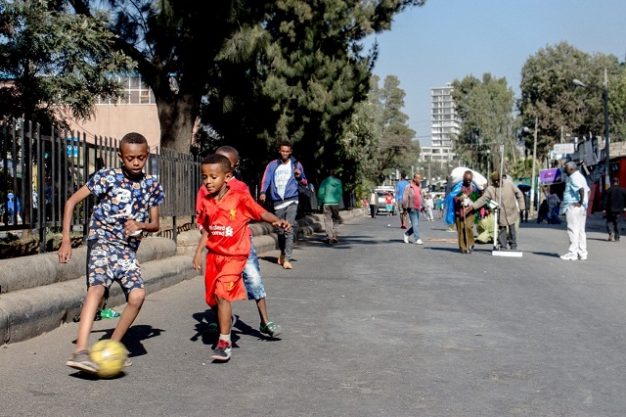 African cities have an imbalance. Around half of the population walks, bikes or takes public transport to get around, usually under unsafe and difficult conditions. But despite this unusually high level of non-motorized mobility, street space is disproportionately allocated to motorized vehicles. Even in cities like Addis Ababa, where car ownership is very low, there is very little infrastructure devoted to keeping pedestrians and cyclists safe and helping them connect to where they want to go.

Now, however, we are seeing signs of a paradigm shift toward more pedestrian-oriented urban development.

A Decentralized Yet Inclusive Approach

Ethiopia’s capital, Addis Ababa, has led the way, closing 4 kilometers of road at the heart of the city on select Sunday mornings. Similar to India’s wildly successful Raahgiri Days, sport and youth associations take to the streets with colorful gear and proudly lead group exercises. Members of cycle associations bike along the main arterial roads. Others play games, walk and socialize. It’s a festival atmosphere.

After the success of Addis’ first car-free day, the national government handed over the initiative to city managers. To make the event more accessible and far-reaching, the deputy mayor further decentralized the initiative to six districts within the city and convened stakeholders to set up a taskforce. The taskforce, led by the Traffic Management Agency in partnership with district heads, the health bureau, sports and youth associations, and local NGOs, rebranded the initiative Menged Le Sewe – meaning “Streets for People” in Amharic. (WRI is a proud member of the Menged Le Sewe taskforce, providing technical support and conducting workshops and trainings.) With the taskforce’s guidance, Addis launched its second car-free day on January 13, 2019, closing more than 9 kilometers of streets.

Many residents and event organizers were skeptical that the decentralized model would be successful, but the response was overwhelmingly positive. It gave significant ownership to communities, and activities began to reflect a diverse social and cultural fabric. Because events were spread out across the city, activities were more likely to be within walking distance for residents too.

What’s more, the enthusiastic turnout for Menged Le Sewe sent a message to the government: There is a critical need to invest in the safety and accessibility of walking and cycling infrastructure and urban public spaces.

Ethiopia’s cities are growing fast, and business as usual isn’t going to cut it anymore. How we perceive and use our streets needs to change. Our allocation of road space needs to be more equitable, and we need more sustainable mobility options to reduce travel times and emissions and create healthier, more livable cities.

Recognizing this, Addis Ababa is investing in a safe cycling program, redesigning intersections and neighborhoods that are safe for all road users, and ensuring that transit corridors prioritize accessibility, safety and public space. These low-cost yet high-impact investments, done with the support of the Bloomberg Global Road Safety Initiative, are reshaping Addis’ future, providing alternative ways to get around while reducing motorization rates that could otherwise cripple the city with congestion, pollution and traffic fatalities.

Addis has committed to supporting Menged Le Sewe one Sunday every month. So far, it has successfully organized four car-free days, each one bringing in new participants and activities. With more outreach, awareness campaigns and capacity building, Menged Le Sewe can reach its full potential and be a model for other cities in the region, demonstrating that streets can be more than just a medium to move cars – they can be a place for people too.

Iman Abubaker is a Project Coordinator with the Urban Mobility team at WRI Africa.